By EVAN GINZBURG – For SLAM! Wrestling

Scott Epstein died early on the morning of December 27, 2013, when his car struck a tree in East Rockaway, NY. He was 64. His friend Evan Ginzburg shares his memories in a special guest column.

When wrestling agent, indy manager and Pastor Bobby Riedel instant messaged me this morning, “Did you hear the news?” I braced myself.

For anyone involved as long and heavily as myself in the often grim world of pro wrestling knew exactly what was coming next. 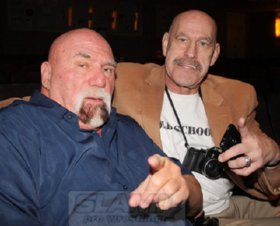 Picking up the phone, I guessed at which one of our heroes had left us too soon. For weren’t there 200 or so wrestlers who had died before the age of 50 from the “Sex, Drugs and Rock and Roll” wrestling lifestyle?

Clutching the phone I immediately said, “Who died?” without even bothering with the obligatory “hello.”

“No!” I shrieked, leaning against the living room wall as my wife looked on in concern.

“Is it an Internet rumor?” I hoped against hope.

“Confirmed,” Bobby said with the finality I dreaded.

“He just called me the other week,” I responded robotically. “He wanted to catch up and grab some dinner one night.” I felt an odd sense of guilt — almost like I was in confession with the wrestling Pastor. Sadly, we never did have that final meal together as my elderly mom has been in and out of the hospital.

Scott Epstein. Former teacher and Assistant Principal. Publicist. Promoter. Writer. Publisher. Photographer. Camp counsellor. Vendor. Agent. Occasional indy wrestling manager. And whatever other gigs this ever-hustling, oh-so colorful “character” could squeeze in. And like the wrestlers themselves he was larger than life with that shaved head, huge moustache, and energy that kids half his age couldn’t touch.

I tried to wrap my head around the news. He’d survived heart surgery and Super Storm Sandy, and somehow a late night ride did THIS? The vehicle with the Macho Man plates? It had been an accident. Earlier today. His car hit a tree. Just like that. How many conventions and wrestling functions had I been in that vehicle travelling down those very same roads with him? How many diners and roadside dumps had we eaten in on the way home from generally meaningless Indy cards we loved to be around? We’d drive up and down those highways talking all the way, reliving both the magic and absurdity of whatever we’d just experienced in this often surreal world of pro wrestling.

And whether we made a few bucks or lost a few, he was already onto the next adventure. “I’m booked next weekend,” he’d say like a kid in a candy store.

On some of the gigs we’d share a room, and I’d wake from a deep sleep and Scott would be frantically typing on his laptop. Hey, he had something to promote. To plug. Emails to answer. Bookings to lock in. The man was tireless.

He was an older guy in a young man’s game and few could touch him, running to cards around the country, booking his beloved talent, and never losing enthusiasm for his end of “the business.”

And how many legends and industry giants had I met through him over the years? How many times did I get butterflies in my stomach finally meeting a childhood hero like his close friend, SuperStar Graham. Then there was Tony Atlas. Ivan Putski. Jay Lethal, who he had a special connection with. Various divas. And a good chunk of the TNA roster.

And they all seemingly had a deep love and respect for that seemingly rarest of creatures — the honest wrestling agent.

You know, in the agent business you get used to bounced checks, last minute cancellations, and standing your ground to get your talent paid. Hey, the promoter “had a slow night.” But Scott Epstein, I can proudly say is the ONLY man I ever gave a bunch of merchandise to on consignment. And like the “mensch” he was, he ultimately paid me for those “gimmicks.”

The outpouring of love on his birthday the other day, and now upon this most tragic of news, attests to a life well lived — and oh so colorfully at that.

Scott, we had some great nights, we had a few bad ones, and this sure feels like you’re just on another of your countless road trips. But know that I always loved and respected you. And we sure had a hell of a lot of fun along the way.

Rest in peace, my friend.

Evan Ginzburg, like Scott Epstein, has been around the professional wrestling business a long time. He was the publisher of the Wrestling Then & Now newsletter and as an associate producer on Darren Aronfsky’s movie, The Wrestler. He is current the host of the Legends TV and Radio shows, available at legendstv.net and legendsradio.net.