Without the inspiration of “The Canadian Giant” Garry Robbins, there would be no Disco Fury dancing up a storm in the wrestling rings of the Pacific Northwest.

To understand his influence on me, we have to go back in time, though, to 1985, when I was a kid in St. Catharines, Ontario. 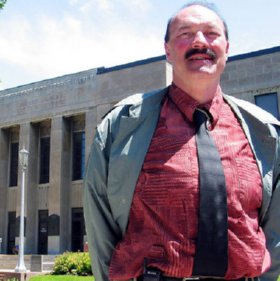 In September, there was a pro wrestling show at the Bill Burgoyne Arena. On that show were Johnny K-9 and Garry Robbins. I snuck up to his section of saved seats and sat down.

A lady asked who I was and why I was in the reserved section. Regardless she told me to stay and watch “The Canadian Giant” kick some butt. When his music hit and he started coming to the ring I was in awe. He was huge, larger than life. He won his match and was heading back to the dressing room.

I was in hot pursuit and I couldn’t let him get away. Just as he was opening the door to his dressing room I yelled out to him. He knew my family pretty well, but at this point I didn’t know that fact. We chatted for a minute and he sent me on my way.

I told his opponent that evening he did great and his hand chopped me in the chest. I mean it was probably a light tap but I was almost in tears! Garry turned around and slammed him on the floor and told him, “Hey, not that kid! I know his mom.”

I was blown away.

Over the next few years I had several meetings with Garry. I kept on telling him I really wanted to be a wrestler. After about the 10th time he heard my plea, he told me to let nothing stop me and to go for my dream.

For my 10th birthday party, I invited all my friends and my classmates — and I told them a pro wrestler would be coming over. They all laughed and told me they couldn’t wait to see this NOT come true so I would be a laughing stock!

Well, there we were sitting around at my party and there was a knock on the door. As I answered the door I looked up in awe and listened as I heard “Is Nathan here?” I told him that was me. He bent down and picked me up but my roof was to low and I almost smacked my head. The kids all were blown away and I become ultra-popular.

As a kid, I was bullied a lot because I was not allowed fight. I just took it in stride. I always thought about how one day I would become this big television star wrestling for WWF. But I believed it and told everyone about it. Regardless it wasn’t always fun.

Fast forward to May 1997 in Vancouver, B.C. at the arena that was then known as General Motors Place, where a WWE house show was happening. There was a lady handing out flyers for the local indy wrestling shows. She handed me the flyer and before she gave me any info on the show itself, I asked, “How do I become a wrestler?” 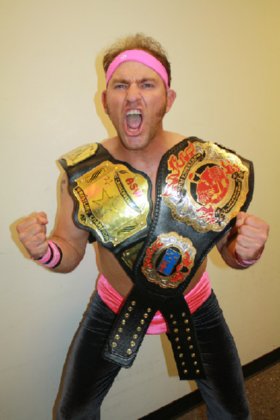 She told me to contact someone named Michelle Starr.

I made the call and boy was I surprised when this husky man answered the phone! We made arrangements on training and where to meet up. I went for my first practice in April 1998, and it was nothing like I thought it would be. I was cocky, arrogant and conceited.

I was put in my place but kept going back for more.

In June of the same year, I was in a motor vehicle accident where I compressed three vertebrae, making my legs go numb for a long time. I went back to practice in August, just as Michelle Starr was planning his Northern Hell tour. So there was all these guys and gals training for this two-week tour and myself. I learned a lot really quickly.

September and October were the same. In mid-October one of the wrestlers cancelled and there was a opening but they didn’t have anyone that they could use, so Michelle Starr looked right at me and said, ‘Kid, you are ready.’

Over the years, I have discussed with Michelle Starr, Vance Nevada, Leatherface (Rick Patterson), and others how “The Canadian Giant” Garry Robbins was a inspiration and told me I could do this pro wrestling thing.

Here we are 28 years later, and I am still active in the ring and haven’t looked back.

Fortunately, I reconnected with Garry a few years back through Facebook. I sent him so many messages and posted so much on his wall I was sure he thought I was crazy. But I did get to tell him how much he meant to me, and now I am doing it again more publicly.

Nathan Burke has been Disco Fury on the Pacific Coast wrestling scene since 1998.