While many wrestling fans will be guffawing at another selection featuring the WWE’s most polarizing figure, John Cena: Greatest Rivalries is a bit different from the three previous releases on “The Doctor of Thuganomics.”

This unique set obviously features the rivalries Cena has been embroiled in since his debut in 2002 (and in one instance, one that started before his WWE main roster debut). With less emphasis on the “Cena the man vs. Cena the character dynamic,” the set immediately differentiates itself from prior works. 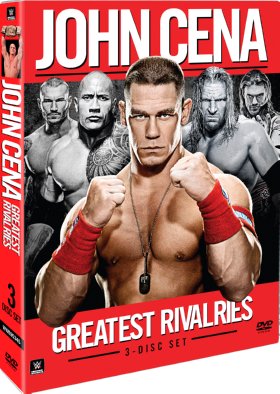 The format of the set features Cena sit-downs with brief reflections on the rivalries before a pair of matches. In some cases, the matches are separated by lengthy amounts of time from the date they occurred. For example, a match featuring Cena as The Prototype taking on Batista as Leviathan from 2002 in the Ohio Valley Wrestling developmental territory is paired with their Last Man Standing contest from Extreme Rules 2010. Others, namely his initial feud with the late Eddie Guerrero, occur within a year’s span. This makes the study of the in-ring work interesting, as it shows the dynamics that changed over time between Cena and his rivals. The format of the set is a definite plus, as more emphasis is on the feuds and the matches within than discussion.

The match selection is also a positive. Most of the feuds feature the more solid contests in that rivalry. Cena’s legendary Raw match with Shawn Michaels is featured with another television matchup. The Last Man Standing contest with Edge from Backlash of 2009 is featured in the section on that rivalry. A few exceptions are notable. Cena’s less than stellar match with John Bradshaw Layfield at WrestleMania 21 is focused on, rather than their classic only a month later at Judgment Day ’05. Still, the match selection generally does a good job at showcasing the best of each rivalry and highlights one of the more underrated aspect of Cena’s ability as a performer.

The cherry on top of this set comes in the form of the rivalry introduction graphics, which feature arcade game versus screens that call back to the Street Fighter series. Additionally, the Blu-Ray exclusive makes the extra money worth it as it features the rivalry between Cena and CM Punk, including their classic Raw encounter. In all, this set does all the little things to give a little bit extra on an already stellar set.

The minor negative of the work is the lack of depth given by Cena in his dialogues prior to the rivalry matches. There is a way to give context on a rivalry without taking too much time and making the viewer disinterested in sitting through the segment prior to the match. That happy medium isn’t really apparent on this set. While the Cena comments are crisp and precise, they give little depth on the actual matches and stages of the rivalries and focus more on the performer he was encountering. In that sense, only the focus on his rivalry with The Rock gives a fair amount of context on the feud, but that is done more by showing a Raw segment between the two than having Cena comment on it. Background is always nice and this set doesn’t really do that.

Cena supporters and detractors alike will find some enjoyment in this set. Very well-formatted and featuring good selections, this is not your normal Cena set which presents the polarizing Cena character versus the personal Cena. Though not as in-depth as it could be, this is an anthology worth your time should you get your hands on it.