Piper’s take on 1984 rambling and entertaining

The WWF in 1984 was in the midst of its build towards national expansion and the first Wrestlemania. The latest YouShoot video from Kayfabe Commentaries features the man in the middle of the wrestling craze. The man who would become synonymous with the 1980s wrestling phenomenon and that is “Rowdy” Roddy Piper. The DVD entitled Timeline: History of the WWE-1984-Roddy Piper is an interesting, twisting tale as told by the energetic and captivating Piper.

Lead by interviewer Sean Oliver, Piper is taken on an emotional journey throughout the 211-minute interview. It starts off with Piper recounting his first failed appearance at Madison Square Garden. His bagpipes had been sabotaged by Freddy Blassie and when Piper tried to play them for the crowd they wouldn’t work. Humiliated and greatly embarrassed Piper was sent packing back to the Los Angeles territory. It is here that Piper reveals his sad motto of “Don’t trust anyone.” 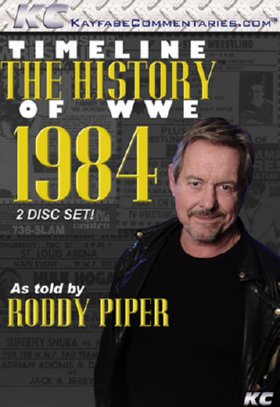 It was in 1984 that Piper entered the then-WWF at the behest of Sgt. Slaughter. Sarge pitched the positive points of having Piper come to the New York territory and that combined with his performance at the first Starrcade against Greg Valentine earned him a first class ticket to the Big Apple.

It became evident that Piper still has very strong feelings about the year 1984. He was the manager of “Dr. D” David Shultz and Paul Orndorff. He was not fond of Shultz. Piper felt that with all of the top talent coming into the WWF in 1984 the competition between the stars was intense. “All of us got rougher playing for keeps,” recalled Piper.

One of the lasting memories for fans of 1980s wrestling is the talk show segment Piper hosted called Piper’s Pit. The unscripted show was known for being wild, controversial and a must see part of WWF broadcasting. In a bid to try and make himself stand out from the crowd Piper went to Vince McMahon and asked for five weeks of TV time, a bow tie and a microphone stand. Very quickly Piper made his mark using his mouth to run down his fellow wrestlers. He embarrassed Frank Williams by proclaiming to the world just how poor of a wrestler he was or smashing a coconut on Jimmy Snuka’s head, Piper created action.

The pace of the WWF’s touring show was described as worse then a treadmill. The athletes were run hard. Something that made it interesting for him was the introduction of Cindy Lauper to the programming. The young pop star “got it” as Piper recalled. The combination of the celebrity rub, the rise of Hulk Hogans as the ultimate good guy and the assent of the ultimate bad guy, Piper, the world began to notice the WWF.

Piper tells his tales in a rambling and emotional manner. Interviewer Sean Oliver tries his best to redirect Piper and to remind him of what he is talking about. Piper became visibly upset when he began to describe a situation that happened to him as a very young wrestler. It became apparent that he had been taken advantage of in a very personal way and that it still haunts him to this day.

Throughout the video Piper provides interesting analysis of the wrestling landscape of 1984. He also gives the audience back stories that lead to the wrestling explosion that is to come. Piper comes across as a very sincere and troubled individual. His demons and past decisions still haunt him to this day as he openly explains that he is trying to rebuild bridges with people.

This video, Timeline: History of the WWE-1984-Roddy Piper is an entertaining offering from Kayfabe Commentaries. If you are a fan of 1980s era wrestling, or Roddy Piper, then you will enjoy this DVD.