The good news for wrestling fans is that current WWE World Heavyweight Champion Daniel Bryan underwent successful neck surgery on May 15. The bad news is that we have no idea how long he’ll be out of action. And as much as I hate to say this, but I agree with Stephanie McMahon that Bryan surrendering the title next week would be best for business.

While WWE Raw was being held in England, McMahon said that because the WWE Universe deserves an active champion, she is contemplating stripping Bryan of the title or having Bryan simply surrender the title next week on Raw because he’ll be out for quite some time. 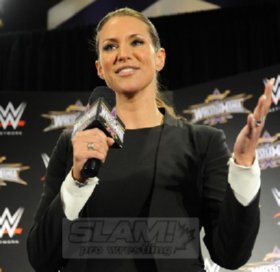 Here’s the thing about Stephanie’s speech: she’s absolutely correct. It’s a shame that Bryan’s last two months have had both such high peaks and low valleys. He won the title at ‘Mania and got married to Brie Bella less than a week later. Like a lot of wrestling fans, I was thrilled to see Bryan defeat all three current members of Evolution to win back the strap. I covered that event at the Superdome in New Orleans and when Bryan held up both titles after his win, I described the moment as cathartic.

From then on, Bryan has faced a string of bad luck including the death of his father, and superfan Connor “The Crusher” Michalek, as well as the aforementioned neck surgery. This is not some crazy storyline where the Authority tries to find a loophole to strip Bryan of his title; this is simply bad luck for a guy who has been on fire for the better part of a year.

Problems with Bryan retaining until he returns

While this example isn’t related to professional wrestling, it does involve a current member of the WWE roster: Brock Lesnar. Lesnar won the UFC title in November 2008. His first title defense was against “interim” champion Frank Mir (who won the interim title six weeks after Lesnar got the actual title) in July 2009, eight months after his title win. Brock then would not fight again until July 2010, about a week shy of a calendar year, because he was diagnosed with diverticulitis. When Lesnar finally lost the title in October 2010, he had held the title for a record 707 consecutive days. However, when you realize Lesnar had just two title defenses during his reign, it’s not nearly as impressive. Having Bryan hold on to the title until he’s healthy enough to defend it defeats the purpose of his character: he’s someone who will go out every night and work his butt off to prove that he is the best.

Having Evolution take on The Shield and having Bray Wyatt against John Cena again at Payback is nice, but it’s hard to care about a pay-per-view when the major title isn’t on the line. Now that the WWE has just one top title instead of two, it’s important that the title still mean something because…

One of the big complaints of the WWE lately has been their inability, or unwillingness, to make any of the secondary titles seem important at all, primarily because the title holder has not been booked properly. It’s been a running joke that whoever currently held the once-prestigious Intercontinental title was going to be much worse off than if they didn’t have the belt. And even though Bad News Barrett won both the IC number one contender’s tournament as well as the title at Extreme Rules, fans are justifiably worried that his current reign might be mismanaged, just like his previous three reigns.

WWE’s other secondary title, the U.S. Championship, also hasn’t been used to its full potential. Dean Ambrose won the title back on May 19, 2013 at Extreme Rules and didn’t lose it until May 5, 2014 for a record 351-day reign. However, during that reign, Ambrose rarely defended the title and when he did, he often retained the title either by being disqualified or by being counted out. While it may have fit his heel personae to hold on to his title using nefarious methods, he didn’t have nearly enough defenses to make the U.S. belt seem like anything more than an afterthought in the WWE.

Benefits of crowning a new champion

The WWE can call the new title holder the interim champ or whatever it wants, but the smart thing to do is to have Bryan relinquish the belt and either set up a mini-tournament much like Barrett’s IC win or to make a Fatal-Fourway/Championship Scramble match to declare the new champion. This would accomplish several things at once:

First, guys who may not have been in the title hunt (maybe Dolph Ziggler, Jack Swagger and/or Cesaro) would get another chance to shine in a main event/PPV-caliber match. Second, just like the IC belt got a shot in the arm with the tourney, this title would now have a lot of big name guys all in the hunt to be its next holder. Third, it should be a good setup for Bryan’s eventual return. Bryan would be able to invoke his rematch clause, and whenever he’s able to return, he’ll be the top contender for the belt he never lost.

And finally, if you want to talk about a booker’s dream, this is it. While nothing has been confirmed, it’s believed that Bryan will be out of action for several months. Assuming there aren’t any complications with his recovery, SummerSlam would be the next big PPV for him to try to win back the title. Since the YES! Movement really started before last year’s SummerSlam event, it would be perfect that he would have the chance to win back the title essentially a year after he truly burst onto the main event stage.

It’s no secret that some of the more memorable moments in wrestling occurred when the WWE had to go with their second, or even third option as far as wrestlers. For example, if we didn’t have the Madison Square Garden Curtain Call and the subsequent punishment of Triple H, Steve Austin wouldn’t have won that year’s King of the Ring, and we may never have had the birth of Austin 3:16. Again, it may not be ideal, but this wouldn’t be the first time a defending champion has had to relinquish the belt. This has led to some of the more famous angles in the WWE.

You can’t talk about a pro wrestler giving up a title without mentioning Shawn Michaels, as he has surrendered more titles than most wrestlers ever win. The most famous is probably before WrestleMania 13 when HBK had “lost” his smile and he needed to find it again.

It may sound odd now, but for a while Dave Batista was actually a fan favorite. Back when he dethroned Triple H at WrestleMania 21, Batista would go on to hold the title for 282 days before surrendering it because of a tricep injury. He would finally regain his title at Survivor Series in 2006, in the very same arena that he suffered his reign-ending injury.

While it’s not “recent” in the past year or so, Edge was forced to both retire and surrender his World Heavyweight title after WrestleMania 27. That gave way to his best friend Christian finally being able to win the title after being pigeonholed as a secondary title holder through the majority of his career (and yes, I’m considering the TNA titles to be on par with the IC belt at best).

So yes. It’s terrible that Bryan will be out of action for the foreseeable future, but it would be a disservice to Bryan, his fans and the WWE as a whole if he doesn’t relinquish his title. When he comes back, I’m certain the WWE Universe will welcome him with open arms and he can pick up where he left off. It’s unfortunate, but the Authority is absolutely correct that this would be best for business.