By HARRY SMITH – For SLAM! Wrestling

Harry Smith is a third-generation professional wrestler, a star in New Japan, and addicted to learning more about his craft. To further his training, he sought out Billy Robinson for further tutoring on the grappling game. Today, he shares some of the lessons learned from the late British superstar.

I first met Billy back on my first New Japan tour when I was 19. I was really stoked to meet and train with him, as we had four days off in Tokyo. However, I had broken my hand by accident in a match right before the days off. I still got to meet Billy and he showed me some standing techniques — I think there’s some photos on my Facebook of it, and I have my hand wrapped up trying to do submissions! 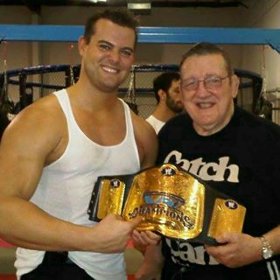 What really turned me onto Billy was my grandfather and my other mentor Tokyo Joe, who both spoke very highly of Billy. Billy had taught Tokyo Joe also and he showed us some techniques of Billy’s, and luckily I got to learn more from Billy himself. My grandfather, Stu, always said Billy was, “ehhh, he was a a tough basturd, and was phenomenal with submissions.” (You have to read the previous line in Stu’s voice!)

Billy’s training methods were spectacular — and everything had to be done as perfect as possible. He would always say “even if you f*ck something up when sparring you have to make the best of the move and either finish out on top or from scratch standing both neutral.”

When I first was learning techniques I would screw something up, and then would stop halfway through. Billy would get furious at me for it, and I understand why now. He said, “You practice and train how you fight and spar. If you keep stopping with a technique halfway through one day you’ll be sparring and you’ll do the same thing and the guy will beat ya.”

He showed me some great standing throws that I use in my pro wrestling and I did spend quite a bit of time with him on the mat learning submissions.

Billy had great respect for all martial arts. He once told me, “You know kid, you’re strong as an ox with your power, if you happen to learn a judo technique over your travels and it works for you, then great. You have to be open minded and learn things that work for you. But not everything will.”

When we were away for the gym after a grueling practice, Billy was a lot different — as was my old coach Tokyo Joe. Both were similar in that both Joe and Billy were very strict during training, to the point of yelling and screaming at you. Afterwards, there’d be laughing at the pub. Billy was a real social butterfly, always flirting with women! Once he got a couple pints in him, Billy would start giving me some great advice on how to chat with women.

When the bill would come, a nice-looking waitress would ask, “Would you two gentlemen like anything else?”

Billy would kiss the girl’s hand and reply, “Yes, your telephone number dear.”

It always got a great reaction, he was a gentleman and the young ladies loved his charm.

I think what I learned from him that changed me was mindset and training intensity. Like I mentioned before, Billy would yell at me for stopping a move or throw halfway because I had screwed it up and was just practising. If you screw something up you keep going and get to neutral or make the best of it. It’s the same way I see a lot of guys practising pro wrestling when I see low intensity or guys making mistakes. I’ll ask, “Well, would you do that lousy of a lock up when in a match?”

Answer is usually “No, but we’re just practising.”

Billy also instilled in me three rules to live by:

#1. Technique is number one.

I remember Billy would stress that even the best technique in the world would find difficulty with someone with true heart. He always praised Josh Barnett as having the will to win and having a great heart for mixed martial arts.

One time I was going to spar a bit with one of Billy’s students — and I’m not going to say who. Billy had told me before, “This guy has more technique than you, so don’t play that with him. What you need to do is push him, and push him hard and you will beat him.”

I pushed and sure enough I did win, a few times actually.

Billy’s legacy to me was that he really loved wrestling and martial arts and was kind enough to pass it along to others. It saddens me I wasn’t able to go and see him one last time, as training had been going good and I had lots of questions to ask him.

I’m sure he wanted to scream at me about techniques one more time!

Billy had a great heart and had turned into a mentor figure to me over past few years. His training was hard and he was strict, but I’m so glad I got to learn his techniques and it has made me a better wrestler overall.

Harry Smith is the son of the British Bulldog Davey Boy Smith and Diana Hart, and the grandson of Stu Hart. He was one of Billy Robinson’s last students, and wrote this piece for SLAM! Wrestling before heading off to Japan for another tour.