Based on the showings at the recent DVD tapings on April 12-13, a youth movement is under way in SHIMMER, and a new crop of women are establishing themselves as rising stars. Here are six competitors poised to make a major impact in the very near future. 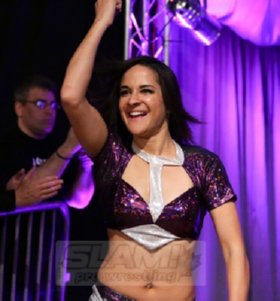 Evie at the SHIMMER taping this past weekend. Photo by Ricky Havlik, RickyHavlik.com

Evie (Age: 25; Years Pro: 6, Auckland, New Zealand)
Charismatic, athletic, and fleet-footed, the New Zelander recently completed a tour of Japan and has quickly established herself as one of the most popular babyfaces on the SHIMMER roster. Evie scored a big win over Belfast’s Rhia O’Reilly at SHIMMER Volume 63 (taped on April 12), and defeated two-time former SHIMMER tag team champion Nicole Matthews on Volume 66 (taped on April 13). She is gifted with a natural grace and has a confident ring presence, and has the youthful, petite look that’s currently en vogue in NXT. Her signature moves include a uranage slam backbreaker onto her knee, a running Yakuza kick where she runs a parabolic arc along two side of the ring before connecting with the kick, and a brutal double-stomp out of the Tree of Woe.

“I see shades of Masato Yoshino in Evie,” said SHIMMER co-founder Allison Danger. “She is easily the fastest moving female in the ring, yet she is capable to keep the fans with her the entire match.”

If she’s not on WWE’s radar yet, she will be soon. 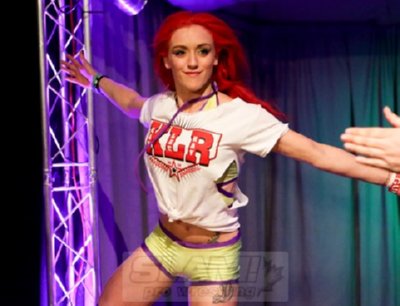 Kay Lee Ray (Age: 21; Years Pro: 5, Glasgow, Scotland)
When it comes to style, you can think of Kay Lee Ray as the love child of Lita and Sabu. The lanky, crimson-haired Scot is billed as “The Hardcore Daredevil” and is known for her high-risk, high-flying offense. Though she gave up more than 60 pounds to her opponent, Jessicka Havok, Ray stood toe-to-toe with “The Havok Death Machine” in a singles bout, trading blistering chops and yielding no ground in a hardfought loss to one of the most imposing female wrestlers in the world. She also acquitted herself nicely in a wild singles bout with Athena, and she closed out the weekend by winning a four-way match against Nevaeh, Kimber Lee, and Leon. Following that win, she was serenaded with chants “Please Come Back” by the discerning SHIMMER faithful in the Berwyn Eagles Club.

“Her super-athletic and smooth high-flying ability in the ring brings something special to female wrestling. I foresee her being a huge star in the U.S. in no time,” Danger said. 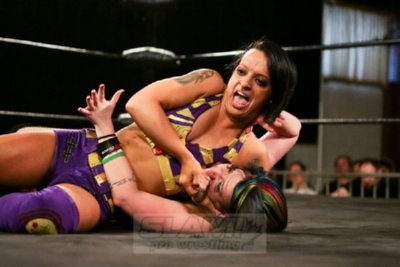 Heidi Lovelace with a headlock. Photo by Ricky Havlik, RickyHavlik.com

Heidi Lovelace (Age: 23; Years Pro: 4, Lafayette, Indiana)
The former Ohio Valley Wrestling women’s champion capitalized on some ill-time interference from a wrench-wielding Portia Perez and handed Jessicka Havok a rare pinfall loss on SHIMMER Volume 66. Billed as “The Punk Rock Rag Doll,” Lovelace earned a standing ovation after her losing effort against former SHIMMER champion Madison Eagles on Volume 63, which might prove to be the match that solidified her position as a SHIMMER star. A petite dynamo, Lovelace relies on a balance of quick attacks and impressive striking abilities. One of her most impressive signature moves is a modified rana which she hits on a kneeling opponent, driving her opponent’s head into the canvas like a leg-scissors DDT. She likes coming off the top rope, with a double-knee drop and a frog-slash as vital weapons in her arsenal.

“Heidi is one of the strongest babyfaces on the independent scene today. You can always count on her to draw the emotion of everything single fan in the room,” Danger said. 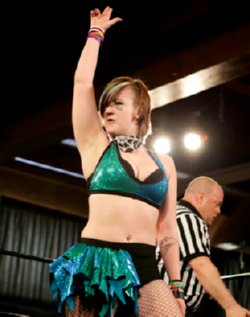 “The Angel of Death” has graduated from the SPARKLE pre-show group to the main roster. Billed from “Old Town, Sin City,” she is a native of Ottawa and a fixture in Montreal’s NCW Femmes Fatales. Skye is a rugged competitor with a hard-hitting style and a colorful look, with rainbow-colored highlights, black and white furry boot covers, and punk rock style. She showcases her impressive flexibility by dropping into a split when executing a neckbreaker, and has an impressive running double-knee strike and a crisp STO slam in her arsenal. SHIMMER wins have been hard to come by (she suffered losses to Heidi Lovelace and Christina Von Eerie over the weekend), but she has shown notable improvement over the past few years and is developing into a versatile part of the SHIMMER locker room.

“Skye comes from strong Montreal stock,” Danger said. “She is so hungry to learn and grow, and with the right opportunities, will one day make a great impact of female independent wrestling.” 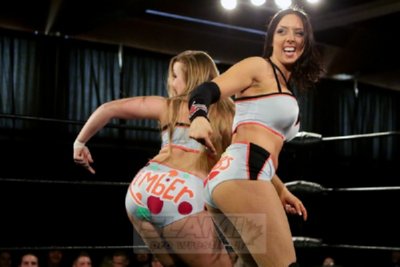 KimberBomb are the cheeky pair of Kimber Lee and Cherry Bomb. Photo by Ricky Havlik, RickyHavlik.com

(Cherry Bomb: Age: 27, Years Pro: 9, Toronto, Ontario), (Kimber Lee: Age: 23, Years Pro: 4, Seattle, Washington
The team of Kimber Lee and Cherry Bomb (collectively known as KimberBomb) has developed into one of SHIMMER’s most versatile tandems. Kimber and Cherry entertain with their daffy comedy and incessant banter during matches, but they also have the pure wrestling chops to go all-out against the top talent in the company. Either individually or as a team, Kimber Lee and Cherry Bomb can thrive in any spot on the card.

“KimberBomb is such a quickly meshing tandem with only the sky as their limit,” Danger said. “Great chemistry, solid in-ring work, and the ability to bring personality and pure entertainment to every match they are in.”

KimberBomb scored a win over Veda Scott and Leva Bates on Volume 63, and suffered a loss the masked Joshi team of Ray and Leon on Volume 65; Cherry Bomb wrestled competitive singles matches against Athena (Volume 64) and Kana (Volume 66), and Lee faced Hikaru Shida (Volume 64) and participated in a four-way against Nevaeh, Kay Lee Ray, and Leon (Volume 66). Though their record at the end of the weekend was 1-5, KimberBomb showed their worth, consistently delivering strong, competitive matches against a variety of opponents. Lee’s stiff, hard-hitting style perfectly complements Cherry’s precision offense, ring generalship, and experience.