In 2005, The Self-Destruction of The Ultimate Warrior was released by the WWE. The documentary featured what could only be considered propaganda, as the relationship between WWE Chairman Vince McMahon and Warrior had been sour ever since the departure of Warrior in 1996. The work featured many WWE employees taking the proverbial hatchet to the career and legacy of Warrior. Needless to say, the feature is a hallmark exhibit of what can happen when things go bad in the business of professional wrestling.

Time heals all and the bridge between WWE and Warrior was reconstructed, leading to his upcoming WWE Hall of Fame induction. With it came Ultimate Warrior: The Ultimate Collection and a chance for Warrior to tell his side of the story, for better or for worse. 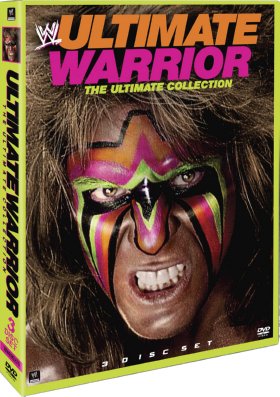 The collection is formatted well, with Warrior telling the story of his career from the beginning with matches soon following the segments. His promos and other in-ring work get another disc to themselves. From looking at the matches and interviews, it gives one a chance to rethink and reflect on the abilities of The Ultimate Warrior. A rare match with Harley Race demonstrates the somewhat underrated wrestling ability of a perceived power worker. Also worth another look is his clash with Rick Rude at SummerSlam of 1989 for the then-WWF Intercontinental Championship. As always, the rewind of the interview and promo work of Warrior is an entertaining reminder of one of the most intense men to ever step in between the ropes.

While having a look back at the work is always a worthwhile study, the real meat of the release comes from the documentary portion. Warrior is finally given his chance to speak about his time in the WWE and he starts out strong, as the set starts with Warrior’s unabashed criticism of the prior retrospective release. Along the way, Warrior treats the viewer with his thoughts on the matches themselves and the shapes of things behind the curtain. What is noticeable is Warrior’s still intense demeanour and brand of honesty, speaking freely when discussing his contemporaries and accomplishments. While subject to interpretation, Warrior’s comments on things such as his Blade Runners partnership with Sting, taking both the Intercontinental and WWF Championships, and helping young talent come along give interesting perspective on the man known as Warrior.

However, no work comes without its criticisms and this set is no different. The departures and souring of the relationship between Warrior and WWE is severely glossed over. While information is clearly available, especially in light of the repair of the relationship between the two parties, a toe is not even dipped into the water in regards to what could provide very interesting content. Though understandable for both parties not wanting to pull back the curtain too far, it remains a glaring omission in an otherwise entertaining set.