Let’s be clear off the bat; The Self Destruction of the Ultimate Warrior is not as bad as everyone is making it out to be.

From reading various reviews, you’d think that WWE did nothing but spend an hour plus destroying what was left of the Warrior’s legacy.

Yes, WWE does do a lot of “Warrior bashing,” but there are some genuine praises that come out of the WWE as well.

In fact, the DVD opens very complimentary to the Warrior, talking about how he had the “it factor” and there was a lot of potential. Through the coverage of Wrestlemania VI, everyone is very high on the Warrior, except for one person — Bobby “The Brain” Heenan.

Heenan, it seems, has the biggest beef with Warrior of anyone associated with WWE. Throughout the DVD, Heenan talks about how Warrior was dangerous to work with in the ring and relates a story about Andre the Giant’s problems with the former Jim Hellwig.

To counter that, however, WWE offers a good amount of commentary from Christian and Chris Jericho, who grew up being Warrior fans. This, ultimately, is what matters most — that the fans loved the Warrior, and Vince McMahon acknowledges this at several points.

As the DVD wears on, the discussion about the Warrior turns quickly towards the negative. We get criticism of his promos before launching into what is quite possibly the best segment ever on a WWE DVD — a discussion about where Parts Unknown is on the map.

Even after this section, plus a less-than-complimentary commentary about Warrior’s promo style, the compliments still roll. Reaching the peak of Warrior’s run in the Fed, WrestleMania VI gets a good focus, as does his bout with Sergeant Slaughter at the following year’s Royal Rumble. Slaughter, while pointing out some of the negatives associated with Warrior, does give Warrior high praise for being over with the fans. 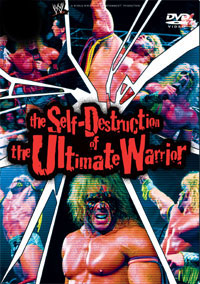 After this, however, all the niceness disappears. Among those very critical of the Warrior at this point is Jim Ross, which is kind of odd since he wasn’t even part of WWE until WrestleMania IX, and by that point Warrior had left WWE for a second time.

Not coincidentally, this is where discussion turns to the various times Warrior was not with WWE, due to hiatuses or releases. The Warrior’s returns are also shown in detail, including WWE addressing the “Hellwig died” rumours. At one point, Vince McMahon states that the rumours died quickly, which is kind of odd, since we still get those questions here at SLAM! Wrestling.

The real bitterness starts to shine through during Warrior’s final WWE run, especially from Jerry “The King” Lawler and Triple H. While Lawler goes into great detail of why he was offended by the Warrior, Helmsley is more blanketed in his statements, merely staying that Hellwig was unprofessional. This is somewhat ironic, actually, since HHH wasn’t professional enough to tape a new commentary, as WWE lifted footage from their “WWE All Day” broadcast during WrestleMania 2000.

While the WWE segments certainly buried Warrior, they did not compare to the verbal trashing Hulk Hogan and Eric Bischoff give Hellwig during discussion about Warrior’s WCW run. While Hogan admits fault in his bout with Warrior in Turnerland, he rips on Hellwig moreso.

By now, any Warrior fan reading this review is probably ready to march to Titan Towers and demand that this project be shelved. Fear not, Warrior Nation, because there are some goodies here, including Hellwig’s first WWE match, top bouts against Hogan, Rick Rude and Randy Savage, promos (including one for Warrior University) and a killer impression by one Christian (Cage).

If, however, you would prefer to keep the childhood, kayfabe-laden image of the invincible Ultimate Warrior, do not get this DVD. This is the kind of release that can completely change the impression one has of their idols.