If throwback jerseys and caps are all the rage, then it’s with great ease — and some disappointment — that I call a recent British release, The Grapple Manual, a throwback book. 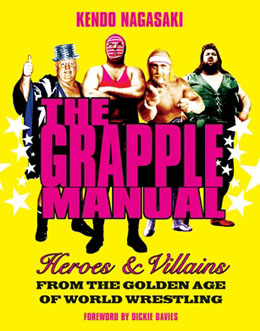 By that, I mean that it is more than just about older stars, as stressed by its subtitle, Heroes and Villians from the Golden Age of World Wrestling.

Instead, it is almost kayfabe in its nature, protecting secrets and identities of some while exposing others.

Given the number of his photos in the book, it’s appropriate to say that full-color, 80-page The Grapple Manual is the logical progression from photographer/writer George Napolitano’s kayfabe classic books The Pictorial History of Wrestling: The Good, The Bad and The Ugly, and Wrestling’s Great Grudge Matches.

So what is The Grapple Manual?

It’s a collection of short biographies on various wrestlers, with a distinctly British flare. The famed, masked British wrestler Kendo Nagasaki is allegedly the man behind the book; this is odd as Nagasaki (Peter Thornley of Staffordshire, England, not the guy who fought Jimmy Valiant a million times) has not spoken a word in public in 40 years. Talk about keeping up kayfabe! (And I say allegedly, as in real small print on the last page of the book, a gent named Rob Cope is credited with the “text” of the book.)

The strength of The Grapple Manual is absolutely the biographies on British stars like Count Bartelli, Giant Haystacks, Big Daddy, Mick McManus, Mark Rocco and, of course, Kendo Nagasaki. In some cases, the subjects themselves are interviewed. What there isn’t, is any opinion from Nagasaki, who no doubt could have offered up something, revealing a little more about himself in the process. And there is undoubtedly a market for Nagasaki, as evidenced by the high ratings for a BB2 Arena documentary on his life.There are even a few names that never penetrated the wrestling psyche across the Pond, like Catweazle, “Cry Baby” Jim Breaks and Klondyke Kate. The colourful descriptions of these characters left me wanting more. (But some of the colours and patterns in the backgrounds of the photos left my eyes aching.)

Unfortunately, someone along the way decided that it was important to include a few big names from the WWE. So what we get are insultingly-short bios on Hulk Hogan, Ultimate Warrior, Bret Hart, The Rock, Jake Roberts, Ric Flair , Randy Savage, and, for some bizarre reason (he died in the UK perhaps?), Yokozuna.

Instead of featuring those stars from North America, The Grapple Manual would have been better served by turning up the Brit-content. Where are The British Bulldogs (The Dynamite Kid and Davey Boy Smith)? William Regal? Billy Robinson? Even “Mr. TV” Jackie Pallo didn’t make the cut.So, in short, The Grapple Manual is a bit of a mish-mash. If you want to learn more about British wrestling, and don’t have essentials like Simon Garfield’s The Wrestling, it’s a good place to start. But if you’re buying it for the bios on the North American stars in it, you’d be better off spending a week going through the SLAM! Wrestling archives.