NEW ORLEANS – Ever since WrestleMania 28, the Monday Night RAW the night after has become the most anticipated show on the calendar; all because of the crowd.

After what happened in the IZOD Center in New Jersey last year, expectations were high in the Smoothie King Center, but after weeks of #HijackRaw and #OccupyRAW the crowd tonight was in a celebrating mood. Not that some hijacking didn’t go on, because hey it was Batista. 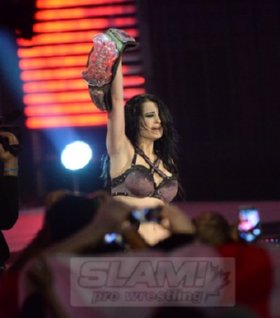 Paige debuted on the main roster and knocked off the Divas champion AJ Lee. Photos by Mike Mastrandrea

Even before RAW started, the crowd was in full throat cheering on Dolph Ziggler in his match for Main Event. All the support couldn’t help him, though, as he fell to Ryback and the Shell Shock.

When RAW started with new the WWE World Heavyweight Champion in the ring, the crowd was prepared to cheer for him all night long. Daniel Bryan asked if they ever stopped which elicited the “NO! NO!NO!” cry. A “You deserved it!” chant followed, humbling Bryan.

The first match of the night featured John Cena, and there was no split crowd here. Cena drew the ire of the entire arena. In an inspired move, the crowd actually sang “John Cena sucks!” in melody with the brass fanfare of his entrance music. During the match itself, the crowd serenaded Bray Wyatt with “He’s got the who world in his hands,” before singing “John Cena sucks” a capella. Unfortunately some of John Cena heat rubbed off on Big E, who was teamed with him.

Fandango-ing was the thing to do last year, at least before WWE co-opted it and made it uncool. It made a glorious return tonight, though.

The first real chance the crowd had to voice its displeasure was when Brock Lesnar hit the ring, but Paul Heyman is one of the few men who can completely bend a crowd to his will and he spun gold the microphone once again.

The good time didn’t last forever, as the crowd tried to hijack the tag team match between the Usos and Batista and Randy Orton. Thankfully the match was short and the Usos retained by countout.

The crowd supported their favorites, even if that Superstar was supposed to a heel. Wade Barrett got one of the biggest pops of the night, at the expense of a normally fan favorite Rey Mysterio. And Cesaro had a break out night, firmly confirming his split from the Real Americans. Despite joining with Paul Heyman that didn’t stop the partisan crowd from singing the Real Americans entrance music. 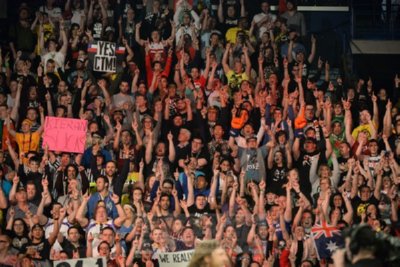 Yes! It was a fun crowd.

And in the surprise of the night; not only did the Diva match get cheered, it may have gotten the second biggest pop of the night when Paige stepped up from NXT to take the title from AJ. There wasn’t a snarky comment to be heard in the house. (Maybe it had to deal with the number of fans from the United Kingdom with both Paige and Barrett?)

Several pro and college football teams say their crowds are the 12th man, but none can hold a candle to the crowd that shows up for the RAW after Wrestlemania.