Ricochet comes out on top on amazing Dragon Gate show 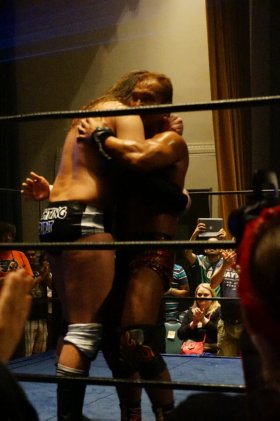 Chris Hero and Masato Tanaka hug after their match. Photo by Matthew Asher

For more than three hours fans were treated to some fantastic matches. The highlight match of the night was the main event for the Open the Freedom Gate Championship between champion Johnny Gargano and the Open The Dream Gate Champion Ricochet.

To call the match amazing wouldn’t do justice. Both Gargano and Ricochet pulled off some of the most incredible aerial attacks I’ve seen in a while. Near fall after near fall, it became less and less clear who was going to leave as the Freedom Gate title holder. Ricochet may have been the fan favourite coming into the match but Gargano didn’t disappoint as the defending champion.

True to his words earlier this week — Ricochet bounces into New Orleans for big weekend — Ricochet said he was going to dominate, and he did just that. When the match was finally over, Ricochet stood tall as the double champion and made a simple declaration to the rest of the DGUSA roster: if you want a shot at either of his titles, just ask and he’ll give you the chance.

Coming in at a close second was the dream match between Chris Hero and Tanaka. While Ricochet and Gargano spent a lot of match time flying through the air, Hero and Tanaka were content to beat the ever-loving hell out of each other. In a match more resembling a bar-room brawl, Tanaka and Hero left everything they had on that mat.

After Tanaka came away with a very hard-fought win, both Hero and Tanaka continued to show respect for each other. Hero declined a Tanaka handshake at first, but only so he could first bow to the victor. Afterwards the two men shook hands and embraced. This was one of those matches where the true winners were the fans.

The Best of the Rest

The rest of the matches on the card were all enjoyable. One thing I’ve never seen before was Drew Gulak of the Gentlemen’s Club put both members of the Colony (Fire Ant and Green Ant) into a simultaneous figure four submission. But probably the most fun, from a fan’s perspective, was the match between Rich Swann and Biff Busick. There was a fan in the first couple of rows constantly heckling Swann. After a few minutes, Swann turned around, said something to the fan that I’m not going to repeat, but it shut that man up instantly and then started rooting for Swann to get the duke.

If you were unable to catch any of the DGUSA matches this week, or if you’re planning on going to California for next year’s WrestleMania weekend, DGUSA has some good news for you. They’re already planning on having some shows that weekend and only DGUSA and the WWE will be within five miles of the site of ‘Mania 31. If next year’s show is anything like they did this year, it will be one of the highlight pro wrestling shows of the year.

Matthew Asher is a freelance journalist currently living in Atlanta. He’s thrilled to have seen DGUSA and can’t wait to see what they do next year in Santa Clara. He wants to know who you’re favorite indy wrestlers currently are. Email him your thoughts.