NEW ORLEANS – It was the classic wrestling story. On one side, the favourite: WWE’s Fan Axxess, a multi-media exhibition that thousands of fans attended on Friday, featuring autograph signings, photo ops, and a host of other activities and exhibits that would put any carnival to shame. On the other side, the underdog: Mid-South Wrestling’s Legends Fanfest, a small affair that saw a few hundred hardcore fans meet with some of the greatest stars of the sport’s yesteryear. This reporter attended both events – here’s the play-by-play. 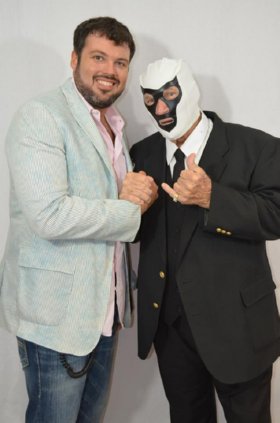 Everything about Axxess, held in the heart of the city of New Orleans in the Convention Centre, is huge. From the ceiling-to-floor banners that line the walls of the entrance way, to the Hall of Fame exhibits, to the life-sized replica Legends House living room set, to the real-life Scooby Doo Mystery Machine van, to the Fruity Pebbles kids area, to the full NXT ring with full entrance ramp and TitanTron, to the Undertaker’s graveyard set, to… well, you get the point.

While all this is going on, there are 10 autograph stations, plus one more for VIP meet and greet experiences, where fans can line up to meet members of the entire roster, and many of the company’s legends. Meanwhile, the NXT ring is being used to put on matches from some of the company’s top future prospects, or for even more interactivity in the form of in-ring Q&A sessions.

If all that weren’t enough, there are plenty of opportunities to show even more support for the company, or maybe just your favourite Superstars and Divas – as the connected Superstore includes several hundred different types of merchandise, from T-shirts, toys, and trinkets, to expensive collectables like replica championship belts and statuettes. Basically, everything and anything you can think of.

The crowd demographics were a complete cross-section of ages and nationalities. Most of the people there that this reporter talked to had never even heard of Mid-South Wrestling, unless it was through the WWE DVD release about that company. Nor did they have any interest in attending the Mid-South Fanfest.

The Mid-South FanFest, on the other hand, was a relatively muted affair held about 10 miles out of New Orleans in the sleepy suburb of Chalmette. There, a couple of hundred die-hards went to a small room in the local events centre to meet a handful of stars of the legendary promotion from the 1970s and 1980s, including: Jim Cornette, the Midnight Express, the Rock and Roll Express, promoter “Cowboy” Bill Watts, Kamala, Bill Dundee, and more modern stars like ECW Originals Tommy Dreamer and Shane Douglas, Mickie James and former WWE Diva Kaitlyn.

At that event, there were no major exhibits beyond photo ops and autograph sessions, save for some Q&A sessions, and a Cajun style dinner for VIP ticketholders. The merchandise was limited to a few T-shirts, some 8X10s, a few vendor tables with DVDs, books, and action figures, and any items that the stars were selling. Though, as one might expect from a company steeped in wrestling tradition, the night also featured a complete wrestling show, featuring a mix of some of those stars with other current names, like Elijah Burke, Lance Hoyt, and TNA Knockout Angelina Love. 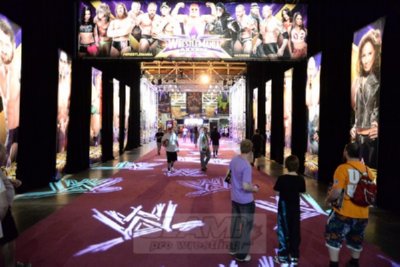 Just the entrance to WWE Fan Axxess is big. Photo by Mike Mastrandrea

The crowd was made up mainly of white guys, most of them between 20 and 30, with some older white guys there as well. Most of them told this reporter that they had absolutely no interest in the WWE product and wouldn’t be caught dead at the Axxess event.

In their view, they were at Mid-South Legends Fanfest to celebrate their favourite wrestling company, to meet some of their favourite stars, and simply to have a fun time.

In that regard, perhaps both sides won.