Jim Ross gets a little help from his friends 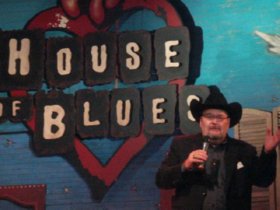 NEW ORLEANS – Though “An Evening with Jim Ross” is billed as a one-man show, anyone who caught his shows in New Orleans on Thursday night were treated to the appearance by some very special guests. At the early show, legendary manager Jim Cornette made an appearance. And at the second, Good Ol’ JR was joined by no less than Stone Cold Steve Austin.

Ross has been touring the show for the past year (a show in Toronto has been announced for May 9, the day before Ring of Honor’s upcoming date), which is his personal reflections of a life spent in the wrestling business.

After promising the crowd that he would not censor himself, either in terms of language or in the tales he would tell that night, Ross started off describing how he first got interested in wrestling, thanks to watching a match between the Assassins and the Kentuckians. From there, he regaled the crowd with stories of working for “Cowboy” Bill Watts. Working for Watts changed his life, he said, and included some very funny stories about his time during wrestling’s territorial days.

True to his word, Ross didn’t filter his comments or stories, and fans howled listening him tell wild tales about subjects such as: washing down two fat naked guys; being offered $100 to take a nude picture of Andre the Giant; and one of his favourites, Dick Murdoch.

His time in WCW was quickly recapped, as was his 20+ year stint in WWE. For those, he kept his stories to a minimum during his prepared comments, and rather touched on most of those times during the last 90 minutes, which was an open Q&A session.

This portion of the evening saw the night’s emcee, Live Audio Wrestling producer (and friend of SLAM! Wrestling) John Pollock, go into the crowd to take the fans’ questions for Ross.

Ross candidly spoke about a lot of matters, including providing his thoughts on recent WWE booking decisions, Brian Pillman’s death; Ross’ past personal health problems; and his debates with Vince McMahon on which talent to recruit during Ross’ stint as the head of talent development — in hindsight, he said, Vince’s thought that they were paying The Rock too much as a rookie are kind of amusing, considering how things went.

He also dismissed speculation that he was bitter about no longer working for WWE. “No regrets,” he said simply. “If I were there, I wouldn’t be able to be here in front of all of you and with (Stone Cold).”

Speaking of Stone Cold, he showed up midway through the Q&A portion, and stayed until the end. The two friends both answered questions about the Montreal Screwjob (for the record, Austin agreed with Vince’s decision to screw Bret; JR said he understood that view as well); the state of TV commentators today; and some funny road stories involving such diverse names as Sable and The Great Khali.

Austin and Ross definitely have chemistry, and their friendship shone through on the stage. Crediting JR as being a big reason why he was so “over”, Austin suggested that he would love to join Ross again, either on stage or on a podcast. And if Thursday night’s show was any indication, the outcome would certainly be an entertaining time.