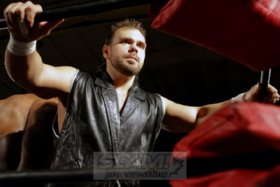 New Orleans is the land of Bourbon Street, the Saints and Louis Armstrong. This coming weekend, it’s also going to be the land of opportunities for a lot of pro wrestlers. Friday night for Ring of Honor’s Supercard of Honor VIII, if Michael Elgin beats Kevin Steen, he will face IWGP heavyweight champion Kazuchika Okada in New York next month. It would be a dream come true for Elgin.

“It’s not a secret that since 2007 I’ve been trying to get into Japan, so those shows with New Japan Pro Wrestling are something I’m really looking for,” Elgin told SLAM! Wrestling.

If Steen, a former ROH World champion, is already sure of a ROH World title shot in Toronto, a win for Elgin here could mean a lot more.

“(Hiroshi) Tanahashi and Okada would be the top two guys I’d like to face but if I had to pick one it would be Okada. He’s on fire for two years now and he’s the IWGP champion (main title for New Japan). If I can beat Steen and him in New York and become IWGP champion it would mean I’d go to Japan to defend it for sure,” said Elgin, with a lot of excitement in his voice.

It’s no surprise that Elgin’s strong style came from the land of the rising sun, as he has always been a Japanese wrestling fan.

“I got hooked through some friends of mine who had tapes of All Japan, Champion Carnival, G1 Climax,” he recalled. “I remember watching Dr. Death (Steve Williams), Stan Hansen and Kenta Kobashi and I really liked their style.”

His match against Montreal’s Kevin Steen will be their third and it will be the rubber match, as both have scored one win each.

“I think it will give us the chance to prove who’s better, to prove who is the top guy in ROH. He thinks he is, I think I am and there’s Adam Cole who has a title he should not have,” he said.

Elgin’s track record during Wrestlemania weekends speaks for itself. In 2012, he had a heavily-praised encounter with Davey Richards. Last year, his match with Jay Lethal also gained a lot of attention.

“In those Mania weekends I think I always give fans matches they want to see. Steen will be no different.”

Steen and Elgin’s names were recently mentioned as being in Orlando for a WWE try-out. While it was true for the former, it was actually a false rumour for the latter.

“I had talks with them late last year and I said it was something that I could be interested in. You know, working for WWE is something that every wrestler is dreaming of. But my ROH contract ends in August and we are renegotiating as we speak,” said Elgin, who just turned 27 last December.

He added: “I don’t see a try-out in 2014. There are still a lot of things I want to accomplish before. It would be important for me to become ROH World champion — to a point people don’t understand.” 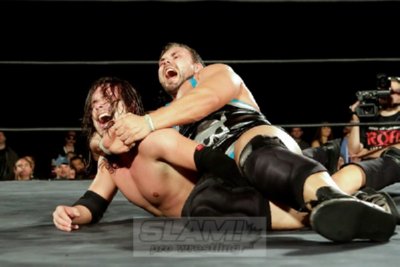 Michael Elgin is all about strength.

The New Japan-Ring of Honor shows will be held on May 10 in Toronto and May 17 in New York. Between now and then, Elgin will also wrestle another stellar athlete in AJ Styles, April 19th in Baltimore.

Their last match, now airing on ROH TV, was a 30-minute Broadway, and a real classic.

“I had two matches with A.J. Styles prior to ROH. But it was a tag and a four-way match. ROH booked the first singles match between AJ and I. Since he had become a free agent I asked for that match. I wanted to face him so the fans could see AJ in a different light. In our first match we wanted to do something special and I think we did.”

A native of Oshawa, Ontario, Elgin started on the Ontario indy scene in 2004. He had a few matches with ROH in 2007 but he was mostly wrestling locally, competing for BSE, GCW, C*4 and LLW among others. He signed his first contract with ROH in 2011 and ever since, sky seems the limit for him.

On top of that, wrestling allowed Elgin to meet his loved one, long-time indy wrestler MsChif, who is still SHIMMER’s longest-reigning champion, from 2008 to 2010. They were married last July and moved to a home just outside of St. Louis, on the Illinois side.

“The transition is great. Life is so much easier for us. Marrying Rachel (MsChif’s real name) is the highlight of my life and the best decision I have ever took.”

In addition to his important match with Steen, on Saturday afternoon in New Orleans Elgin is going to wrestle former IWGP Junior Heavyweight champion Rocky Romero as a part of the ROH TV taping.

Steen, Romero, Styles and perhaps Okada would seem to be a lot on Elgin’s plate, but that’s exactly what he wants.

“I want to show the fans and everybody that I’m one of the elites!”