Getting access to WWE stars Heyman, Clay and Piper at Axxess

We were really limited both with time and the number of questions we were allowed to ask, so I wouldn’t call any of these more than sound-bites.

Roddy Piper is a WWE Hall of Famer, and a part of the upcoming WWE Network show Legends House, so one of the cool things fans get to do at Axxess is hang out in part of the “house.”

The Rowdy One, who was in the main event of the first WrestleMania, was asked what his favourite Mania moment was.

“I think my favourite WrestleMania moment was going to the ring for WrestleMania III,” said Piper. “Because when the (ring-shaped mini) cart (that transported the wrestlers to and from the ring), it broke. I don’t know what happened to it. And there’s Vince saying, ‘wait, wait.’ And I said, ‘nah, I’m gone.’ I ran down (the entrance way), and that was the first time that I’d looked at all the people. Everybody was on their feet. They were shouting so loudly that Gorilla Monsoon and Jesse Ventura who were sitting right there couldn’t hear each other. It was a moment that only you people could give me, and I’ll never forget that.”

The Canadian-born Scotsman was also asked about Mr. T’s induction into the Hall of Fame. The two have a lot of history, both with the first Mania main event of Piper and Paul “Mr. Wonderful” Orndorff against Hulk Hogan and Mr. T, and WrestleMania II, when Piper faced Mr. T in a boxing match.

“At the time, Mr. T was the most popular television celebrity,” began Piper. “And I think that he deserves to be in the celebrity branch of the Hall of Fame. I give him all credit for that.”

WWE heavyweight Brodus Clay is slated to participate in the Andre the Giant Battle Royal on Sunday, and considered his chances. 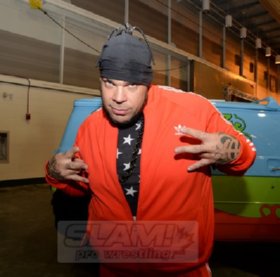 Brodus Clay is in the battle royale at WrestleMania. Photos by Mike Mastrandrea

After being dropped at the last minute from the card last year at WrestleMania — as dramatized in the first season of Total Divas, Clay is back on the card. Two years ago, he didn’t wrestle, but instead The Funkasaurus was a part of a big dance show with dancing mamas.

“I’ve been training hard. This year hasn’t gone as great as I wanted it to in terms of where I’d be in my career,” admitted Clay. “But I took the downtime to dedicate myself to the gym and diet, so come WrestleMania, I’m going to be ready.”

Paul Heyman was in full character mode as he previewed the Brock Lesnar bout at WMXXX against The Undertaker. It’s the second year in a row that Heyman is involved in the Undertaker’s match, which he was asked about. 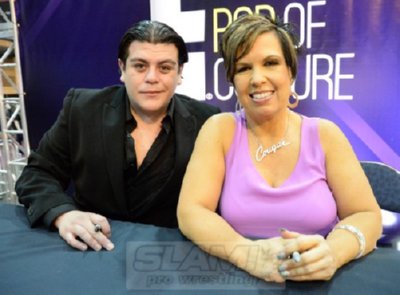 Ricardo Rodriguez and Vicki Guerrero at Axxess on Friday.

Ricardo Rodriguez shot to fame alongside Alberto del Rio, but was dismissed by the Mexican aristocrat. His pairing with Rob Van Dam was brief.

At the moment, Rodriguez has been doing commentary, and addressed the new gig.

“It’s definitely different, but I enjoy it. I like having another hat to wear. Obviously, as an entertainer it gives us more value if we’re not just one thing. It helps that the company gives us the opportunity to show our value,” Rodriguez said. “For me, my in-ring experience helps (me be a better commentator). I know the moves, I know what they’re called. I have my history from being in wrestling for the past eight years now, so of course it helps.”

Not a commentator any longer, or a WWE employee for that matter, Jim Ross was at Axxess signing autographs.

He was asked about his two shows at the House of Blues in New Orleans on Thursday, where he told stories and brought up two special guests. [Note: I was there, and wrote about — Jim Ross gets a little help from his friends.]

“I had a blast. It over-achieved at the box office, and I thought creatively, with Jim Cornette and then ‘Stone Cold’ (Steve Austin) there, it added a lot to it,” Ross said. “I had a lot of fun, and I think the audience did. I’m looking forward to bringing the show to Toronto on May 9th – it’s going to be big.”