NEW ORLEANS — Tens of thousands of wrestling fans will cheer on their heroes this Sunday night at WrestleMania. But on Saturday, WWE hosted a celebration for heroes of a different kind, namely 31 Make-A-Wish children who attended a special lunch in their honour the day before their trip to WrestleMania — complete with special guests Rey Mysterio, AJ Lee and John Cena.

After a welcome from WWE Director of Community Relations (and resident angel, who, for the past 30 years has been co-ordinating and arranging the dozens of Make-A-Wish events WWE puts on annually) Sue Aitchison, the kids and their families were treated to a pizza lunch before the Superstars and Diva were announced. 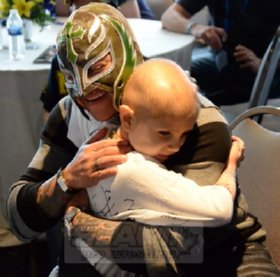 Mysterio and Lee, who the kids had been told were attending the event at Audobon Aquarium, were announced and immediately went around to each table to say hello to the kids and families. They said hello to each child, giving them words of encouragement and a hug, and on everyone’s face — children, parents and the wrestlers themselves, there were smiles all around.

But there was even more to come. Particularly for the majority of the kids who, based on their attire, were definitely Cena fans. He had not been announced in advance, but it was clear that the kids were hoping he would be there anyway.

This reporter saw one such child, a wheelchair-confined boy named Brandon Bowen from St. John’s, NL, literally praying that Cena would be there. When his familiar music hit, Brandon was bouncing up and down in excitement — and when Cena bee-lined his way to give him a high five, it seemed like Brandon was ready to fly into orbit.

As the guest of honour, Cena had the privilege to present each child with a “Circle of Champions” plaque, a certificate showing their name written on a picture of the WWE Championship belt. During this portion of the event, each child got to come to the front of the room, receive their plaque, and have a few moments with Cena.

As jaded as many wrestling fans are watching Cena in the ring, it would be hard to be so watching the faces of these children light up when they got to interact with the man. Though fighting life-threatening diseases, their problems were all but forgotten in the presence of their hero. One child could barely walk to the front of the room under his own power, but that didn’t stop him from going up there, and saluting Cena when he got there. Brandon, fully decked out in Cena’s trademark wristbands, got an even more special moment when he exchanged one with Cena. No matter how brief the interaction, it was visibly evident that they were thrilled. 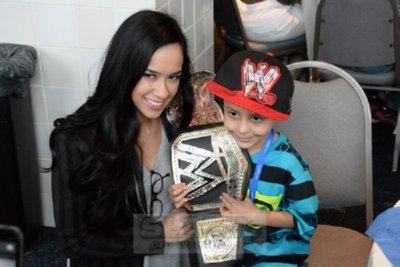 As they will be on Sunday as well, where the kids and their families will be attending WrestleMania as WWE’s special guests.

“That,” Cena told the kids, “is the real fun. WrestleMania. WrestleMania is a life-long wish of mine and it’s a very important thing in my life. I’m very happy you were all here with me today, and I’m even more happy that you’ll be there with me tomorrow to share it with me.”

After the event, SLAM! Wrestling had a chance to talk with Lee, Mysterio, and Cena about the event.

“I think it’s the coolest thing,” said Lee. “As entertainers, we get to do a lot of traveling and seeing the world and a lot of things that are pretty cool for us to experience. I’m glad to have the opportunity to give back and do something good with our (position). It’s so flattering that these kids find WWE so important that this is what they choose (as a wish). It’s this stuff that makes it all worth it. I’m so proud of the company and so proud to be part of this event.”

Mysterio agreed, noting that for him, all Make-A-Wish events are life-changers, not only for the kids involved, but for the Superstars and Divas as well. 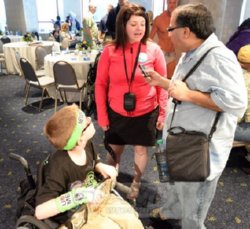 Bob Kapur talks with Brandon Bowen and his mother Paula, who are in New Orleans all the way from St. John’s, NL.

“As humans, as Superstars, as fathers, we get to witness how difficult life can be sometimes for the youth,” Mysterio said. “It’s really important that we can come and help them this way, not only for them, but also for us.”

Cena echoed both of his colleagues, noting that he gets as much out of these events personally as the kids do.

“Somebody said to me, ‘What you do for those kids is fantastic.’ And I stopped him and said, ‘No, what they do for me is fantastic.’ Because they provide inspiration,” said Cena. “To meet all those families, to see the happiness they have right now — and it’s not even WrestleMania yet — that’s so inspiring. I wish I could put into words how much that motivates me. It’s awesome.”

But perhaps it’s Brandon that truly summed up the event. “It was awesome. This was my wish for a while, and it was awesome.”

Bob Kapur didn’t take any of the pizza from the event, so everyone can just stop speculating. He did grab a cookie, though, before he left. Flame away at [email protected].