Julia and Jared, ages 9 and 11, respectively, are siblings from Houston, Texas. They first got into pro wrestling thanks to their Uncle Tony, a longtime pro wrestling fan. They traveled to New Orleans with their mother and are anxiously awaiting to see if their favorite wrestlers will emerge victorious. 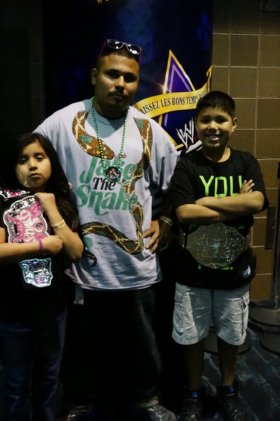 Siblings Julia and Jared from Texas shared their WrestleMania thoughts with our reporter. Photo by Matthew Asher

Julia’s favorite pro wrestler is former WWE Divas Champion Kaitlyn, but on the active roster, her favorite is Nikki Bella. Jared, is a big fan of WWE Hall of Famer Shawn Michaels (aren’t we all?). So it shouldn’t come as a surprise that his favorite active wrestler is none other than one of The Heartbreak Kid’s students, Daniel Bryan.

Just because these siblings are young, it doesn’t mean they simply root for whoever is popular. Both are fans of submission wrestling, as Julia lists her favorite finishers as the AJ Lee’s Black Widow and Alberto Del Rio’s cross arm breaker. Justin loves seeing Bryan slap on the YES! Lock, but is also a fan of the Stone Cold Stunner.

They also gave their thoughts on three of the most anticipated matches on this year’s ‘Mania card and appeared very confident in their choices.

Both Julia and Jared believe that Daniel Bryan will beat Triple H and then go on to successfully defeat Randy Orton and Batista to become the new WWE World Heavyweight Champion. How Bryan wins the title is where they find some disagreement. Julia believes Bryan will hit the running knee on Batista to capture the gold while Jared thinks Orton will be the recipient of the knee to the face.

When asked if Lesnar would finally be the one to break The Streak, both Julia and Jared had a resounding “No”, even before I was able to finish the question. They both said ‘Taker would emerge 22-0.

Being one of the big men in the WWE, it should come as no surprise that Brodus Clay is a fan of other Super Heavyweights. His all-time favorite WrestleMania entrance was done by the legendary Andre the Giant at WrestleMania III. Clay loved it because “there was no music and there’s Andre mean-muggin’ it with Bobby Heenan.” Hulk Hogan retaining the title in that match also goes down as Clay’s favorite WrestleMania moment, but not for the reason you may think. Clay was one of the rare kids who was rooting for Andre to dethrone Hogan. When Hogan had his hand raised, Clay said, “I was the only kid in tears” when Andre was unable to capture the title.

Sin Cara was able to answer a few questions as well. Rey Mysterio’s WrestleMania 22 entrance, complete with the Aztec warrior headdress, is his favorite ‘Mania entrance. When asked about what he would like to do at WrestleMania 31 next year, Sin Cara simply responded that he would love to have a singles match against Rey himself. For fans of lucha libre wrestling, it’s a very intriguing matchup as it might be a “passing of the torch” moment from Mysterio to Sin Cara.

Finally, I got a few questions in with “The Fink” Howard Finkel, who is the only person to appear either on-screen or announcing for all 29 previous WrestleManias. When first asked about his favorite ‘Mania entrance, he said any of the Undertaker ones. But when asked about his absolute favorite one, he said John Cena’s WrestleMania 22 entrance is the one he remembers best.