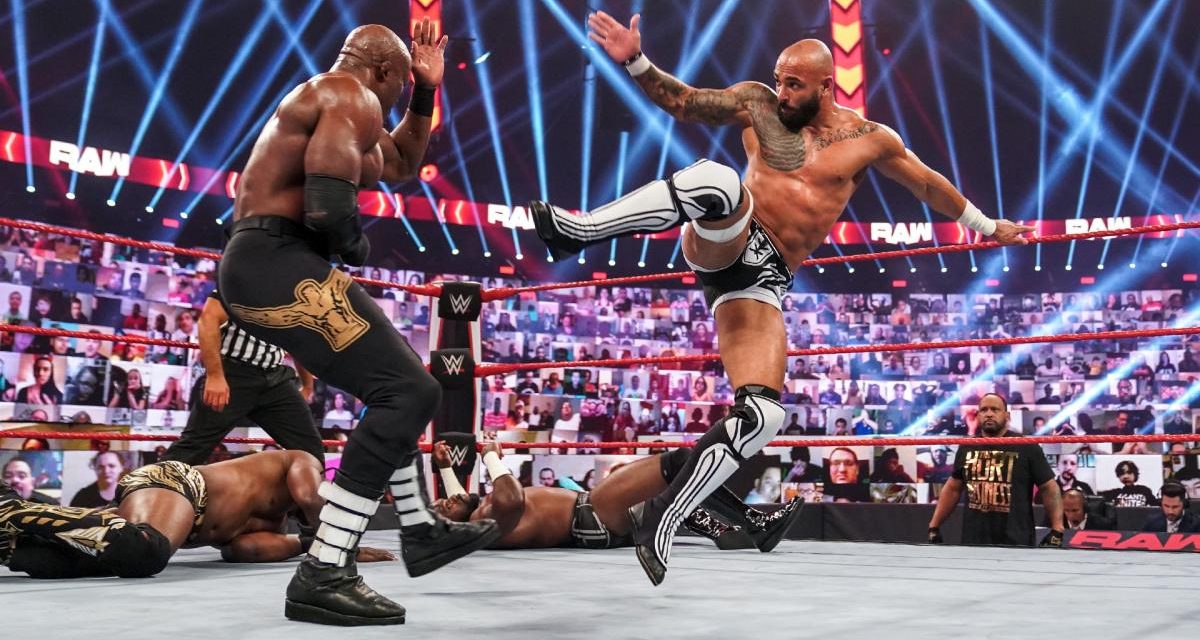 Ricochet has a plan for the rest of the year, entering a very big weekend in New Orleans where he is a featured performer on Evolve and Dragon Gate USA shows: “Domination. Plain and simple. That’s my goal. I just want to show the world what I’m about.”

What he is about is spectacular high-flying moves, incredible athleticism, and a driving desire to be the best.

“This weekend in New Orleans, I think everyone’s going to see exactly that I mean business,” Ricochet told SLAM! Wrestling while packing for the trip. “If they already haven’t, they’ll know this weekend for sure.” 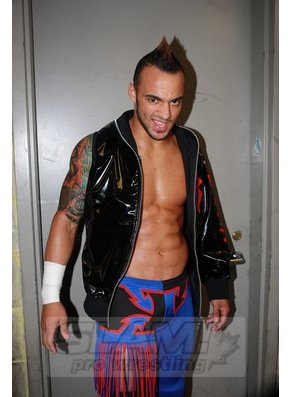 Ricochet heads into a big weekend in New Orleans as one of the top stars of Dragon Gate USA. Photos by Christine Coons

Though only 25 years of age, Ricochet (Trevor Mann) has been wrestling since 2004 (and has also been known as Helios and Cameron Locke). He’s a talent that is coming of age in more than one way.

“Ricochet is an amazing athlete who does some of the most breathtaking high-flying stuff I’ve ever seen,” said Evolve/DGUSA booker Gabe Sapolsky. “However, where I respect him is how much he has grown and improved as an overall performer since he started with us in 2009. He was originally booked for his high flying, but since that time he’s become a charismatic, well-rounded, major-league talent. His constant touring for Dragon Gate in Japan has given him the platform to grow into an elite performer.”

As well, Ricochet is trying to grow physically. He’s 5-foot-10 (if you include the Mohawk-style haircut or his floppy Afro from days gone past) and slim.

“I’m actually gaining weight right now. I’m at about 183 right now, give or take, and I’m trying to get to 190,” he said. The plan is to take it slow. “That way, while you’re gaining, you can still get used to the weight you’re putting on, to not lose your agility.”

On a personal level, he’s been a full-time wrestler for roughly four years now, but a father to a son for five. It’s a tricky thing to balance real life and the demand for his talent on shows across the globe.

“This year, I think I’ve overdone it, man. I’ve been booked so much,” he said. “Between the end of January to September, I’m only home a little more than a month, maybe a month and a week or something. That’s not one chunk, but a couple of days here, a couple of days there.”

Going to Japan and Europe for extended tours is one thing, but he has made the conscious decision to demand a little more while at home.

“I have to charge a little more, especially when I’m home in America, and I don’t know if guys really understand that,” he said. “I have to charge this because I’m missing out on time with my little boy to come and do your show.”

“It’s kind of hard for me to decline money,” he continued. “Seeing how I’m only home for 10 days, eight days, the money’s got to be pretty good to be worth my time to miss out on family and friends and all that stuff.” 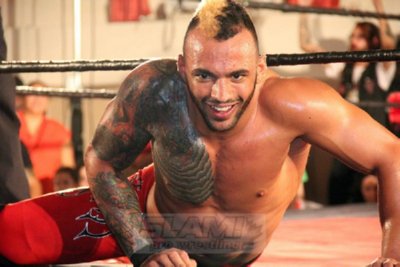 Ricochet’s bread and butter these days is Japan, where he was the first gaijin to win Dragon Gate’s Open the Dream Gate Championship, beating Masato Yoshino at the beginning of March in Osaka.

Unfortunately, visa issues mean that the Japanese stars of Dragon Gate USA cannot make the trip to the major shows this weekend in New Orleans.

“I’m a little bit surprised, but visas are really, really hard to get at the same time — at least that’s what I hear, that visas are incredibly hard to get. They said they only missed it by one day,” Ricochet said.

He will get to see his friends on the next trip to Japan, while those in New Orleans aren’t as lucky. “I’m over there all the time, so I get to see them quite often. It’s more for the fans’ sake. The fans really wanted to see the guys, they want to see CIMA, [Akira] Tozawa, [Masata] Yoshino, some of the other guys.”

Asked to preview his three matches this weekend, all at McAlister Auditorium at Tulane University, Ricochet didn’t shy away from praising his challengers.

On Thursday night, during the Evolve show, it’s Ricochet versus Anthony Nese, but the Open The Dream Gate Championship is not on the line. “The last time I wrestled Nese, he cheated, but he still won. I’m looking to get back that victory. In the end, as much as I hate to admit it, he is a premier athlete, not only in Dragon Gate but anywhere he wrestles at. I’m looking to see if I can’t get the best out of him, and he gets the best out of me. I think we’re going to tear the house down.”

Friday night is the “big one” said Ricochet. He challenges for Johnny Gargano’s Open The Freedom Gate Championship, the top title in DGUSA.

Does he respect Gargano? “I do, I really do — more than people probably think I do. He’s obviously an amazing wrestler … He is one of, if not the best guy in Dragon Gate right now. I definitely have the utmost respect for the guy. There’s no denying how successful he really is in the ring.

Saturday will be a little more fun, with a six-man tournament going on with some mixed-up teams. In the round one bout, Ricochet, Rich Swann and AR Fox face off with Chris Hero, Roderick Strong and Masato Tanaka.

“Those are some of the most fun matches to be in, to participate in, and to watch, I think,” he said. “During these six-mans, they’re legendary because there’s just so much fun, so much action going on that it’s a real treat. One of my favourite matches to watch.”

As well, Ricochet made mention of the other bouts he is looking forward to watching.

“I want to see the Low Ki-Trent Baretta match [on Saturday] because obviously it’s been a while since Low Ki’s been in a Dragon Gate ring. Trent, he’s the FIP champion, and he’s been killing it. We’ll see what happens then, because I think it’ll be a good match.” On the same card is Evolve champion Chris Hero against former ECW World champion Masato Tanaka. “Hero and Tanaka is going to be good. Anything Hero’s in is going to be good, and obviously Tanaka is Tanaka.”

Ricochet himself had a WWE tryout in December 2013 and doesn’t know what to say about that experience.

“They just wanted to get a good look at me or something. I really couldn’t tell you what will come from it or not,” he said. “They said that it was an open tryout, and the door’s not closed, but that they just don’t have anything for me right now. That’s fine with me, because I’m taking over the indies. As weird as that sounds, I’m loving what I’m doing, travelling the world, seeing things, having fun. What more can you ask for, really?”