There is a man who was at the centre of the first WrestleMania and has been a part of every one thereafter, even if it’s in a backstage capacity. Yes, Vince McMahon is the mastermind behind the sports entertainment revolution, but he wasn’t in the middle of the ring at that first show. Rather, it was long time WWE employee Howard Finkel who assumed the ring announcing duties that night. 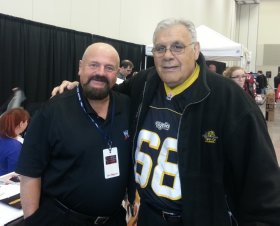 In person, Howard Finkel is an engaging and positive person. His love for wrestling is evident when he discusses the business. “Wrestling is my life. I bleed WWE, I wear WWE,” Finkel said at the Niagara Falls Sport Expo, where he signed autographs and posed with fans.

At that time the World Wide Wrestling Federation was run by Vincent J. McMahon, the father of the current owner, Vincent K. McMahon. In a time before widespread cable television, the McMahons didn’t think that their product was being shown in the New Haven, Connecticut, area and didn’t think that promoting shows would be profitable. In 1975 there was a UHF television station from Long Island with a signal that came across to Long Island Sound and into the New Haven area clearly.

Finkel recalled that it was his devotion to wrestling that got him noticed. “I was a big fan. I went to the building manager and said, ‘Mr. Smith, do you realize that the WWWF is on every week in this area?'” remembered Finkel. His employer phoned the WWWF office and told Vincent K. McMahon of his employee’s observation. “He said to Vince, ‘I gotta tell ya, there’s somebody who works for me who is an absolute nut about you guys, and that is Howard Finkel. He told me that your show comes on over the air here as clear as a bell and I found out for myself as well.'”

The WWWF decided to take a chance and run the shows again in New Haven. The younger McMahon also wanted to meet the observant usher. “I met Vince on that evening in the summer of 1975 and he was very appreciative of my telling Mr. Smith about my situation and he found out that I was a very ardent fan of the product and before everything was done and said goodbye to him he gave me his phone number,” said Finkel with a smile.

“And that was like, ‘Oh my God, I got Vince McMahon’s phone number!’ It was amazing and one thing lead to another and I told him I did some public address announcing and things of that nature back in the old high school days. He was willing to give me an opportunity as a ring announcer.”

On April 1, 1980, Finkel was hired by the WWWF as a full-time employee, and has been there as it morphed into the WWF and then WWE. “It has been a wonderful ride ever since and it shows no signs of ending and I don’t want it to,” emphasized Finkel.

When Vince K. McMahon began to organize the details of the first WrestleMania, Finkel was involved in the meetings. “So when the idea (WrestleMania) was presented to me I was ready for it,” said Finkel with enthusiasm. “We started in 1984, a lot of things happened. The precursor was 1983 because we started expanding. Vince had a vision to go global. So, anything that came our way, my impression was let’s go, I want to make this the best thing we can possibly do.”

WrestleMania has become a brand that is recognizable throughout the world. The name “WrestleMania” has become synonymous with excellence and entertainment. But where did the name come from? “Back in 1984 there were many meetings going on to try and get the ship that we were painting launched,” recalled Finkel. “With the visions of Vince McMahon we were going to try and establish ourselves not only as a sport but in the entertainment as well. So, a meeting was held to cross the t’s and dot the I’s. When it came time to come up with a name, what could we call this event?”

Finkel remembered the impression and mayhem that the Beatles created in 1964 and played with the idea. “This was 1984, so I said 20 years ago four guys from Liverpool came across the shores to the United States and made a phenomenal impression on everybody. They called that Beatlemania. So I said, ‘There was Beatlemania. Why can’t there be WrestleMania?'” The rest is history.

Being involved in 30 WrestleManias in some form or fashion is an impressive streak that Finkel is proud of. He has three WrestleMania moments that have made an indelible impression on his memory.

The first one is the very first WrestleMania in 1985. “That was the acid test. We didn’t know where we were going but we were on our way,” said Finkel. “We had, in my estimation, we showed the entertainment industry with the personalities that we had. What we in the wrestling industry knew how to present. The mix was flawless. The hybrid worked. I will always remember the first one because that set the bar for where we wanted to go beyond.”

His second moment was from 1987, WrestleMania III from the Pontiac Silverdome in Michigan. “How can you not include that as one of your favourite moments?” questioned Finkel. “We had WrestleMania I and WrestleMania II. They say good things come in threes. It was not good, it was awesome.”

The crowd at the event amazed the veteran announcer. “When you are in the ring in front of 93,173 people announcing it was the thrill of a lifetime. I cherish that moment dearly. That was a major statement that was made.” The sea of humanity and that excitement of the matches between Hulk Hogan and Andre the Giant, Randy Savage and Ricky Steamboat made the event unforgettable. 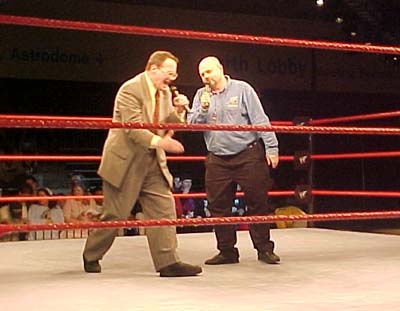 The third moment was on April 5, 2009 at Reliant Stadium in Houston, Texas for WrestleMania 25. Howard Finkel remembered the event fondly. “That was the 25th anniversary of WrestleMania. It was a night I will always remember because I was inducted into the WWE Hall of Fame, the class of 2009.”

For a man that has never donned tights and wrestling boots, it was particularly satisfying. “It’s a rare club of individuals who have made that Hall of Fame and knowing that I have and still to this day continue to give everything I have no matter what I do in this company that is something that will always, always, be the epitome of greatness for me.”

Today Finkel works for WWE.com and dispenses his Finkel facts to the staff when they need historical information. He has appeared on camera at every WrestleMania and if there is one streak that will not be beaten or broken it is his.