Rosettani, who was born January 21, 1939, was one of many to come out of “The Factory” that was Hamilton over the years, its men hardened by time in the steel factories and trained for wrestling under Jack Wentworth or Al Spittles, both of whom had gyms in Steeltown. 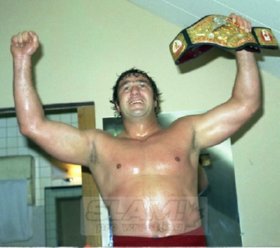 Vic Rosettani with the Canadian title. Courtesy of the Wrestling Revue Archives

Besides his time working around southern Ontario and into Detroit, Rosettani was a big star out in Calgary for Stampede Wrestling, where his arch-nemesis was Archie “The Stomper” Gouldie. They brought the feud out east for “Bearman” Dave McKigney in the summer for tours of smaller Ontario towns.

As well, Rosettani wrestled as a German named Vic Mueller, Cowboy Vic Raines in the south, and the Canadian Wildcat.

His initial territory was Northern Ontario, run by Larry Kasaboski, where he learned alongside Duncan McTavish (Matt Gilmour) under masks as the Hangmen.

“I taught Vic to wrestle. I took him up there, and we worked as the Hangmen there for a while, which was quite interesting,” recalled McTavish years ago, adding that sometimes they worked in the opening bout without the mask and then the main event under a hood.

Big John Quinn, another Hamilton product, remembers the Hangmen well — as their name almost came true to life during a bout in Northern Ontario.

“They hung me in the corner,” said Quinn of the hangman’s noose. “They pulled the thing up on me in the corner, and it tightened up, and I was unconscious. I remember waking up in the dressing room. I remember one of the referees said to me [on the stretcher], ‘Stay there, it looks good.’ When I got in the dressing room, I stood up and looked in the mirror. Holy sh–! My whole neck looked like a raw hamburger.”

“As the Hangmen, they had a lot of heat, but of course, you wouldn’t know who they were. They covered themselves well.”

A November 1993 story by Doug Chambers in Canadian Championship Wrestling recalled Rosettani as a “little fireplug … A tough competitor, Rossitani, was famous for his street fighting skills and outside the ring brawling.”

Through the years, Rosettani hit most of the territories in North America, if only for a while. He spent quite a while in the Mid-South territory, where he teamed with Arman Hussian, and in Minneapolis, worked one of Ric Flair‘s very first matches in 1972.

With his naturally curly hair and good physique, Rosettani was a natural babyface.

And Archie “The Stomper” Gouldie was a natural foil.

“I recall Rosey very well from his days here,” said Bob Leonard, the Stampede promoter in Saskatchewan and photographer. “Pretty good worker, had a good run with Archie on top, and got on well with the boys. We made a couple of trips to Calgary together, good guy to travel with. .. Vic was a good man in the ring and out, and always fun to spend some time with.”

Rosettani was a well-liked guy, but not the most open about his life, said Quinn, who knew him when they were younger in Hamilton and said Vic never changed. “I liked him. He was a hard-ass. I liked him but he and I, I can’t honestly say he was a friend — you didn’t get to know him that well.”

Others confirmed that when Rosettani left the wrestling business, he left it almost completely.

Pat Blake is one of the few old Hamilton wrestlers that kept in touch with Rosettani. “Since he got out of the wrestling and retired, he says, ‘I’ve got no need to be with the boys. I never liked being with them. There’s nothing in common any more. They’re sitting and talking there, and all they talk about is the old days,'” explained Blake. “Well, he’s kind of young on the mind and young in the heart. He likes to talk about young things and do things. He’s a different guy. He does fishing, he’s fishing every day.”

His son, Vic Rosettani Jr., addressed his father’s reluctance to talk about his past.

“I can tell you this, Big ‘V’ loved wrestling, he loved being with the boys, and he loved traveling around the world doing it. But when it ended he really never talked to any one but me about it,” said Rosettani Jr. 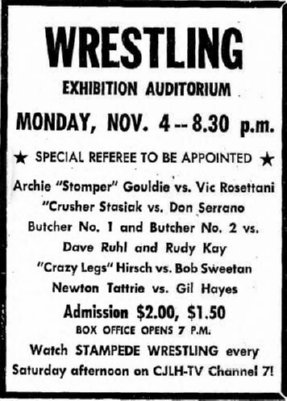 Here’s a bout from Lethbridge, Alberta in 1968 between Vic Rosettani and Archie Gouldie, one of hundreds of times they must have wrestled.

Growing up with a father as a wrestler meant an unconventional household, confirmed Rosettani Jr. But he and others in the family shared Rosettani’s passion for health and working out.

“My father was a great man that helped many many young boys and girls not only in training them at the local YMCA but in life’s future challenges,” said Rosettani Jr. “He taught us as he taught all that life is only what you want out of it. Nothing will come to you, if you want something you have to go after it.”

The last number of years were rough on the Rosettani family. “He battled cancer for 18 months. The whole time he was still telling visitors to keep their head up, work be good to your friends and do one thing good for someone every day and it will come back to you,” said Rosettani Jr.

Vic Rosettani is being cremated on Thursday, and the viewing is on Sunday, from 2-4 p.m., and 7-9 p.m. at Friscolanti funeral home on Barton St. in Hamilton. The service will be on Monday at 11 a.m.

Greg Oliver only met Vic Rosettani once, at Bullwhip Danny Johnson’s funeral; subsequent attempts to do an interview or have him come out to events like Titans in Toronto, never got a response. Greg can be emailed at [email protected], and you can follow him on Twitter @gregmep.