What’s next for Paul Heyman?

Paul Heyman didn’t plan on being back in WWE for an extended period of time. He was initially meant to be the mouthpiece for Brock Lesnar and then be gone, back to his day job, in New York City, running one of the most successful multimedia agencies in town.

But there he is bumping in a Hell in a Cell match, and competing in handicap matches against CM Punk, with no real end in sight.

“I originally only came back to work with Brock Lesnar, and that was it. It was a very, very short-term. It involved SummerSlam and WrestleMania,” said Heyman, promoting the Hell in a Cell pay-per-view. “And that’s all that Brock had committed to when I came back. Things just took off from there.” 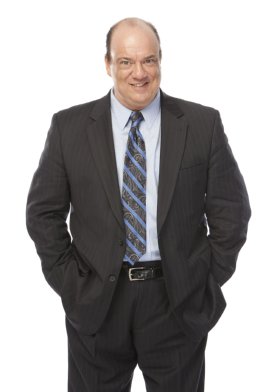 Paul Heyman sees himself as more than a manager. © 2013 World Wrestling Entertainment, Inc.

The pairing and subsequent feud with CM Punk has been television magic for the most part.

“When CM Punk and I got together on television, it added just a whole new dynamic. It allowed me to take the character in many, many different directions,” explained Heyman. “All of a sudden, it went from being a very limited, short-term deal, to being a recurring character on a weekly basis — being part of the ensemble cast of Monday Night Raw.”

Like a lot of things in professional wrestling, it could not have been predicted: “The momentum keeps expanding the role.”

That role of manager has changed over the years for Heyman, who is a long-time wrestling fan who went from a ringside photographer to manager to booker to promoter to TV commentator to manager again. It’s been a remarkable ride for one of the key figures in the history of pro wrestling. Heyman’s vision for what Extreme Championship Wrestling could be was the template for much of the current wrestling scene, a ramped-up pseudo-sport with compelling storylines that reflect the current times, violence, sex, and competitiveness mixed into a thrilling drama.

He doesn’t see his current role, accompanying Brock Lesnar, Curtis Axel and Ryback to the ring as being a traditional manager.

“I don’t look at this role as a manager. I’ve tried for many years not to be labelled a manager,” Heyman began. “I’m not offended by the term, but 11 years ago with Brock, I wanted to be called an agent, not a manager. On television I continually now use the word advocate instead of manager, and that’s because I think the role is much different.”

Case in point, he’s an in-ring performer on the current European tour. “If I look at my schedule right now, and I’m scheduled for all the tours for the rest of this month and for November, I don’t have one booking as a manager. I’m booked all over Europe, I’m booked all over this country, in two-on-one handicap matches. So I’m booked as a wrestler right now, not as a manager. At 48-year-old, I still have not had formal training as a wrestler. The role has changed. We’re not just doing the typical old-school gimmick matches that Lou Albano used to participate in. We’re out there doing, like we did at Night of Champions, we’re giving them some really physical confrontations. I think the role has changed and I don’t know what the right phraseology is for what that role may be.”

Thinking of the role that managers/agents/spokesmen might play down the road gives Heyman pause for thought.

“Where do the next generation come from? I think the next generation, it starts with the ability to sell a ticket and to entice people to buy a pay-per-view. So I think the first part of the job is to be a spokesman. Once you have that part nailed down, where else you want to take that role can be very varied. I would suggest my role with Brock is different than my role with Curtis Axel, and therefore my role is different than Zeb Colter’s. And I would suggest that Zeb’s role will be different than Ricardo Rodriguez’s. Ricardo’s job was primarily to be the guy who introduced [Alberto] del Rio. If you needed him to get involved, you could, but he was primary the guy who was Del Rio’s personal ring announcer. Then there were things that were added to the act as time went on that made sense to add to it. I think it’s different for everybody, but it starts with the ability to speak.”

Heyman has always excelled on the microphone, infuriating fans, building up his charges. It’s an old-school skill for sure, one that Zeb Colter — veteran wrestler Dutch Mantell — brings to the Real Americans, Jack Swagger and Antonio Cesaro, as well. 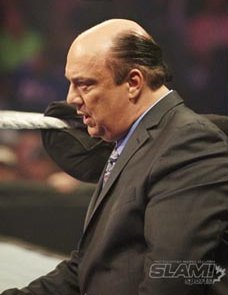 “I think Zeb fit a need at the moment. When things really click in this industry, it’s when they service the needs of the moment, and it ends up playing into the long-term,” said Heyman, personally a proud leftist and the antithesis of the Zeb Colter character. “You have all these hot-button issues in the country, with immigration and health care, etcetera, and here’s somebody who, Dutch is very articulate. He knows how to speak passionately on these issues. It’s not like he’s unfamiliar with the subject matter. It’s not just a writer handing a script to a manager, and the manager saying, ‘Okay, I have to say A, B, C, D, E, F, G.’ Here’s a person that can speak on these subjects from any position that you want him to. He fit the immediate need that the company had to play on these hot-button issues, which then ties into the long-term of, which of his guys can he get across to the public to become bigger stars, into the bigger, more personal issues and money-drawing programs.”

For all his successes, Heyman doesn’t see his job as guaranteed, and warns others of the dangers of thinking that their position is secure.

“I joke about this with the young guys, but it’s very true to me — I feel that every performance that we put in on a Monday night is simply an audition to appear on the next Monday’s television show,” he said. “There are too many young guys who are vying for a spot on the main roster, and who are trying to break through the system, trying to come through NXT. Everybody focuses on, ‘Well, the territories used to provide so much talent.’ There’s a hundred-something guys under contract in NXT, and they’re all aching to be on global television. That’s your competition right there. Besides everyone else who just wants to come in and pickup a payday, there are guys who have devoted their lives to being in that developmental system right now that would kill for the opportunity to be on Raw every Monday night.”

There are things that Heyman would still like to do. 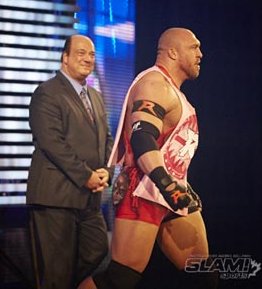 Paul Heyman is pretty pleased with Ryback at WWE Battleground in September, in Buffalo, NY. Photo by Andrea Kellaway

“I don’t know what the next barrier is to break through, and I don’t know what the next great goal is to achieve, but I certainly would hope that there’s more to accomplish,” he said. “For example, I’ve never managed in the main event at WrestleMania and I would love [that]. There are things that I know Brock wants to accomplish for us in this industry, that I prefer that Brock goes public with those goals when it’s time. I know that Brock and I have talked about things that we’d like to accomplish, that we haven’t had a chance to do yet. Hey, I’d love to be the first guy to ever manage the WWE and the WWE World heavyweight champion at the same time as well.”

If and when the time comes to go off television, Heyman finds satisfaction with the Looking For Larry media agency.

“It’s an advertising, branding and marketing firm. We actually turn down more clients than we actually sign with just because we really have a full plate right now,” he said. “We’ve expanded our staff, we’ve doubled our staff in the past year and we’re looking to add to it. The only thing that we’ve really cut back on are the thinktanks that we’ve done, because I just don’t have the time right now to do them with the schedule that I’m on with WWE.”

It’s a team effort, for sure. “I have a partner who goes into the business every day. I certainly reap the benefits of his hard work,” he said. “We still do the Heyman Hustle video series and the Heyman Hustle website, which is thriving right now. We do an enormous amount of high-quality digital post-production in New York City. We’re pretty well known as the best digital post-production house in New York City.”

If you are a wrestling fan, chances are you have seen one of the company’s spots — the Ultimate Warrior commercial for the WWE 2K14 video game.

Back in front of a camera, Heyman seems happy, pleased with his continued ability to piss off the fans — the “walrus” chants are a reward. Could there be a specific Paul Heyman DVD down the road, one that celebrates the career arc of Paul E. Dangerously to Paul Heyman?

“One would think that they would be inclined to do so. I’m sure there would be a lot of people lined up to say a lot of bad things about me, and rightfully so,” Heyman joked. “And maybe a few that would be generous enough to forgive me for my past sins, and say a couple of nice things about me. I don’t really push myself onto the merchandise area, I really don’t. I’m very, very fortunate right now in that I don’t worry about things like that. I go in, I see what we have for Mondays, I make my suggestions as to how we can make it even better. I have that open forum to make those suggestions. Then I just go out there and I perform it. Should there be a DVD? Ah, I like to think there should be. Will there be one? It’s not my call.”

There would have to be an old cell phone with the DVD, though, a phone as big as one’s head, suitable for use as a foreign object.

“Of course! I wouldn’t have it any other way.”

Paul Heyman’s insight helped a lot into Greg Oliver and Steven Johnson’s book, The Pro Wrestling Hall of Fame: Heroes & Icons (with Mike Mooneyham), but he’s only quoted once. Can you find out where? Buy the book! Greg can be emailed at goliver845@gmail.com, and you can follow him on Twitter @gregmep.