Doug Lindzy – a Masked Professional with a Redbeard – dead at 76

Doug Lindzy, who was known to wrestling fans at various times as “Mr. High” Doug Gilbert, The Masked Professional and Redbeard, died Monday at age 76 in Omaha, Nebraska. Fittingly for an agile high-flier, he went out with a highspot.

“He went out so peacefully, man,” shared his youngest son, Steve Lindzy. “When he went out, at the very end, he opened his eyes and I kid you not, it was just pure unadulterated love. It was powerful, just boom. He looked at Mom, he looked at Mike, he looked at Terri, and he looked at me, and the eyes were just so full of love, and he closed them. And that was it. It was gorgeous.” 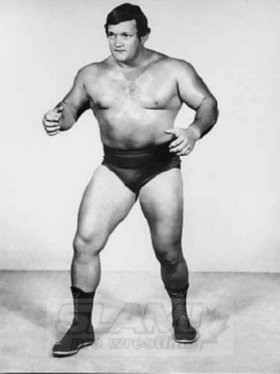 For the last three years, Lindzy battled Alzheimer’s Disease, and over the past few weeks, he had difficulty breathing, with fluid having to be drained from his lungs. Eventually his body could take no more.

Lindzy was originally from South Bend, Ind. He met several wrestlers when he was lifting weights and ended up training at the Marigold Arena in nearby Chicago. His aerial acrobatics — flips, head scissors, and dropkicks — were a direct result of trying to emulate French flyer Edouard Carpentier.

“I did it, but I had to work pretty hard to do it,” he recalled in The Pro Wrestling Hall of Fame: The Tag Teams. “At that time, Carpentier was doing a lot of gymnastics in the ring and everybody was trying to copy him.”

Promoters spelled his name Doug Lindsay or Lindsey, and when he began teaming with Johnny Gilbert (Gilbert Sanchez), he became Doug Gilbert (no relation to Tommy Gilbert and his sons Doug and Eddie).

In his column in the September 1958 issue of Wrestling Life, Dick Axman provided some backstory: “Doug Lindzy, a twenty-year-old youth of South Bend, Indiana, is one of the best prospects in the mat sport. He has won many honors for a young athlete. Lindzy won a Teen-Age Mr. America contest in 1955 in Kansas City. He also won a teen-ager heavyweight lifting contest in Kansas City in 1957. He holds the 1957 heavyweight lifting title in Indiana and he is the heavyweight wrestling champion of Indiana. His mat career is a little over one year old in the professional end.”

The Midwest was his wrestling home for much of his career, from Kansas City to Indianapolis to Omaha to the AWA in Minneapolis, but he also had success in Los Angeles, where he was the TV champion, and in Florida, where he was tag champ with Mike Webster and was known as Redbeard. In Montreal, he bodyslammed Andre the Giant during a Grand Prix Wrestling show. There were stints in Amarillo (masked as The Destroyer) and the WWWF as well.

Georgia was the other place where he really made an impact; he was four times the state champion, and held the tag belts three years, with three different partners: Assassin #2, El Mongol, and Bobby Shane.

The biggest run of his career, though, was the AWA World tag team title reign with Dick Steinborn, who was “Mr. Low” doing the ground wrestling to Lindzy’s “Mr. High” who delivered an aerial attack. 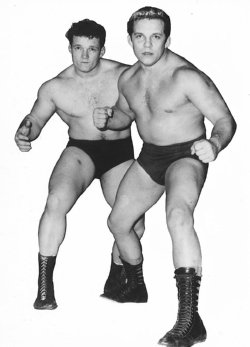 That began in 1962, when Dick Steinborn arrived in Minneapolis. With the clever emphasis on clashing styles, the Mr. High and Mr. Low team was a smash hit with fans and vaulted to the top of the AWA tag division.

“Gilbert flew like a modern day aerialist. He was just flying all over everywhere,” Steinborn said. “I watched him and I said, ‘Holy cow, this guy is over — how am I going to get over?’ I can’t even do half the stuff he does. So I’ll wrestle. I’ll stay on the mat.” In their first match together, Steinborn sat on the bottom turnbuckle, and Gilbert on the top. When they tagged and entered the ring, Gilbert vaulted over the top strand, and Steinborn climbed under the bottom one. The innovation was so clever that American Wrestling Association owner Verne Gagne left the TV control room to view the match from ringside. “I said, ‘Listen Doug, you’re over with your high flying stuff and I’ll get ’em with the wrestling,’ ” Steinborn said. “Then, when we went down for the interview, it hit me. Just call him Mr. High and call me Mr. Low. It was never planned.”

Steinborn’s wife helped to form a “Mr. High and Mr. Low” fan club, bringing in another $40-75 per week in return for a photo and membership card. “We had a very good team. We tagged back and forth a lot,” Gilbert said. Mr. High and Mr. Low won the AWA belts from Art and Stan Neilson, and feuded with The Kalmikoffs before losing the titles to them on January 1, 1963. But their rematches throughout the winter and spring of 1963 drew big crowds through Minneapolis, St. Paul, and the rest of the Midwest.

In Omaha, Lindzy was in a championship tag team with Reggie Parks. In Joe Dusek’s promotion, the top team had a trophy to lug around. “The trophy was about six feet tall, and anybody who touched it, it would fall apart,” said Parks. Lindzy suggested they make title belts instead, and well, 40 years later, Reggie Parks is known as “The King of Belts.”

After learning of his friend’s passing, Parks recalled how quiet Lindzy was, and how he wasn’t big into the party scene. Like Parks, Lindzy liked to work out.

“He got really big. He’d bulk up and then he could lose 30 pounds in one week — you could just see him get smaller,” reminisced Parks, figuring it had been 20 years since he’d seen his friend at a Cauliflower Alley Club reunion at Studio City, California. “He’d just diet, not eating.”

In April 1964, Wrestling World listed Gilbert as one of the nation’s Top 50 wrestlers. “This fast, exceptionally talented 220 pounder set the mat world afire in 1963,” wrote Stephen Tischler. “Rated as the greatest ‘aerialist’ since Rocca, one of Doug’s best maneuvers is the dropkick. Gilbert is married to female grappler Kay Noble. When he teams with Dick Steinborn, the two make one of the best tag teams in the country. Doug has beaten the Kalmikoffs, Bill Miller, The Sheik, The Beast, Fritz and Waldo Von Erich and Crusher Lisowski — and Doug hasn’t even reached his prime!”

Wrestling Confidential profiled the Gilbert-Noble union in May 1964, in an article titled “I’m Glad I Married a Wrestler” by Don Hatfield. “A man like Doug offers the perfect combination … Being a wrestler, he’s big enough and rough enough to take care of me. Being a gentleman, he shows me more kindness than any man I’ve ever known. It’s not true that all male wrestlers are big, mean dopes. This one is as gentle as a lamb — with me, at least,” Noble is quoted as saying. 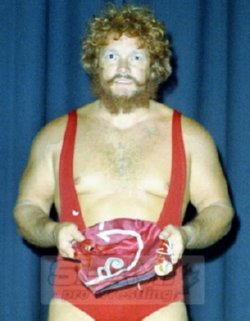 Any wonder he was called Redbeard? Courtesy Chris Swisher

The magazine reported that the two met in an elevator in Omaha before the matches that night, and that they were married in 1959. Initially, they tried to stay in same territory: Vancouver, Omaha, South Bend, Minneapolis. When they had kids, they settled in South Bend, Indiana and kept horses as well.

The union between Lindzy and Noble (who died in April 2006) resulted in three children, Theresa, Michael and Steve.

Lindzy’s second marriage was in July 1973. “We had lived together for six years, we got married,” recalled Annie Lindzy. She happily accepted the children from Doug’s first marriage. “When I got them, they were 10 months, three and five, so I pretty much lay claim to them,” she said.

The couple had a second, more formal wedding decades later, after Doug converted to Catholicism.

“Along with three beautiful kids, he gave me a very, very loving marriage, and lots of friends,” Annie said, referring to the always interesting wrestling crowd. “They were strange, strange but wonderful. I loved being a part of the life.” There were chairs with Mad Dog Vachon’s face on them at the second wedding, as well as Vachon himself and his wife Cathy, who live not far from the Lindzy household in Omaha. 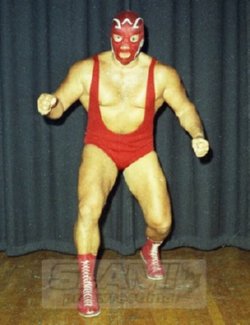 “Growing up in wrestling world was, oh man, very, very exciting,” said Steve Lindzy. “We’d be on the road a lot with Dad. We got to meet with all of them — Andre, Flair, Ole and Gene Anderson, Bruiser Brody, Skandor Akbar, all those guys. They are absolutely very good people. It was fun. When you were young, and your Dad wasn’t doing too good in the ring, you’d get scared sometimes, but then you realized that they were wrestling and it was show.”

And Lindzy performed his show well. As a headliner in Georgia in 1968, under a mask as The Professional, he challenged for the NWA World title, held by Gene Kiniski.

With the mask, he was a natural to team with, and then feud with, the Assassins. The Professional #2 came along as well, later revealed as Paul DeMarco under a mask.

Near the end of 1969, he was unmasked, but kept on as a big part of the promotion.

After his career petered out in the 1970s, Lindzy ran a gym in Omaha. 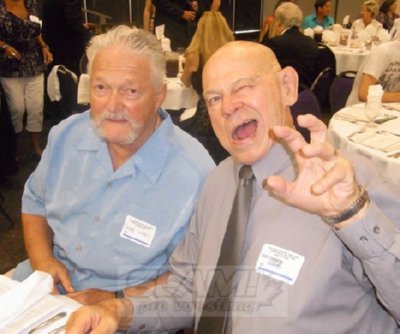 Doug Lindzy and Baron Von Raschke at the 2012 induction banquet for the George Tragos/Lou Thesz Professional Wrestling Hall of Fame in Waterloo, Iowa. Photo by Retroschmit

He was not one to toot his own horn about his accomplishments, said his son, Steve. “Dad was never one to brag about himself. He could do some really cool stuff in the ring, but just would not brag,” he said. “He was just very soft-spoken.”

He will be cremated. Visitation will be at the Bethany funeral home, 82nd & Harrison, in Omaha, Wednesday after 6 p.m. with vigil service at 7 p.m. Mass will be held on Thursday, 10 a.m. at St. Rose Catholic Church, 4102 S. 13th St., and he will be buried at Interment Hillcrest Cemetery.

— with files from Steven Johnson, and the Georgia Wrestling Hall of Fame