I have had the second volume of Blood Red Turns Dollar Green right at the top of my reading list for about two months, but I was very busy with different projects and frankly, I was a little worried. The first book was so much fun, what if this one did not live up to it? What if I didn’t like it? Then I read Mick Foley’s take on it. 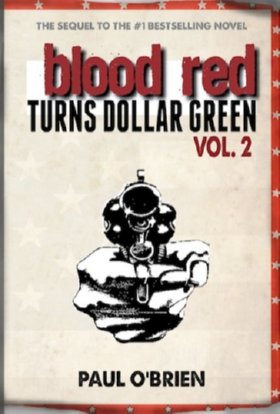 “It’s essentially The Godfather with suplexes. Very well written, creatively done, a lot of research, the research is obvious on every page. Because of you Paul O’Brien, I stopped thinking about writing a wrestling novel. Because I knew you would probably do a better job, than I could ever do!” wrote Foley.

Now I had to jump in and leave my reservations behind. My daughter was scheduled for minor surgery; the best way for me to pass time and not get too worried has always been for me to jump into a book. I set my sights on this and went through Blood Red Turns Dollar Green: Volume 2 in just a few hours while waiting for her. Like Foley, I am now also seriously rethinking my wrestling novel ideas. I would say, without hesitation that this book is better than the first.

First thing off, O’Brien expands the universe he created; we get new majors characters driving the story like Shane “Sugarstick” Montrose, Curt Magee and police officer Nestor. This one gives you just enough wrestling but indeed jumps into the crime drama that Volume 1 left us on. But the wrestling parts are so good and so richly written, you can see the characters and the 1972 time period come to life right in front of you. I wish they would turn these into a movie or maybe an HBO or AMC series. If the first one was a page-turner, I was burning my fingers going through the second book.

The simple premise is that after reaching the top of his business, promoter Danno Garland is unable to cope with a loss so hurtful, that he actually turns away from the wrestling business only to be totally consumed by revenge. That draws unwanted attention to him and his business but also to the business of his partners. That attention suddenly put cops on their trails and decisions are taken that change the course of the wrestling business in this universe.

As all good wrestling bookers know, sometimes you need to put your star wrestler on the back burner to prevent overexposing him. This way when you put him back in the main event, people missed him and he gets a second life. This book uses the same approach with the star of Volume 1, Lenny Long. You wonder why he gets so little time early on in Volume 2, but the story is so good, you are not too upset. New characters are so cool and different you don’t really miss Lenny Long that much, if you don’t like the “Sugarstick”, well, you’re not a wrestling fan. Then right there at the end, Lenny Long makes a major comeback that set us up for a major storyline in Volume 3.

I love when I read a book or watch a movie that all the clues are there and like a giant puzzle, you start putting the whole thing together yourself before getting the validation of being right at the end. This book does that, all the clues are there just be attentive to pick them up. Don’t go read into that it’s so easy you can figure out the whole ending before reading the book. In the last few pages, O’Brien sends you a few curveballs that make you doubt yourself. Just to make all writers even more jealous, he throws in a complete surprise that makes total sense! That element, that you did not see coming but still feels organic to the story. I was ecstatic, that story kept on delivering up until the last line.The book is available mainly via electronic format but if you are like me, you can always get a paper copy. I suggest dropping by his website paulobrien.info for all the details and with a little luck you might just get a free copy of Volume 1 if you are still undecided. How can you go wrong with a deal like that?