Varon serves up a winner with The Squared Circle

If you’re a wrestling fan traveling through Western New York, you stop at Ilio DiPaolo’s Restaurant in Blasdell. If you’re passing through Atlanta, a stop at Abdullah the Butcher’s House of Ribs and Chinese Food is a must. If you’re in the Sunshine State, it’s Hogan’s Beach in Tampa. 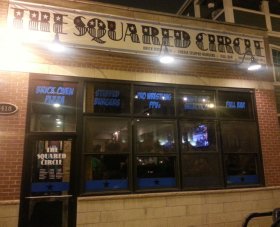 And if you find yourself in the Windy City, be sure to schedule a stop at The Squared Circle where you can enjoy a “Gail Kim-chi” burger, with a side of pizza wontons, and wash it down with a Godfather Ho-Ho milkshake.

You can also look forward to chatting with Lisa Marie Varon, the two-time WWE women’s champion (as Victoria) and five-time TNA Knockouts champion (as Tara). Varon co-owns the restaurant with her husband, Lee, and serves as the public face of the business, greeting patrons and talking with fans.

“I’m here every night,” Lisa told me recently, as I visited The Squared Circle for the official SHIMMER after-party. A cozy sports bar with a variety of beers on tap and a sprawling menu of specialty pizzas, stuffed burgers, and unique sandwiches (including some with wrestling-inspired names), The Squared Circle is located in the northern section of Chicago, just a few blocks away from the north branch of the Chicago River. Though the restaurant can comfortably seat about 70 people, it was a standing-room only event on this particular night, as fans mingled with SHIMMER wrestlers and staff, and Lisa stopped to talk and pose for photos with everyone in sight.

The Squared Circle hosts after-parties for Chicago-area independent promotions, airs WWE and TNA pay-per-view events, and airs Raw, Smackdown, and Impact on the massive big-screens set throughout the restaurant. Wrestling memorabilia adorns the walls, including ring gear from Victoria, Gail Kim, Lita, Sting, and others.

“I love this. I get to go talk about what I love — wrestling,” Lisa said. “The fans here are very loyal, and I have become friends with many of them. I’ve actually kind of rediscovered my passion for wrestling here, because I can still watch wrestling and enjoy it as a fan, which allows me to just enjoy it and not be as critical.” 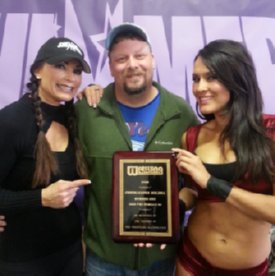 Lisa Marie Varon and Dan Murphy of Pro Wrestling Illustrated present Cheerleader Melissa Anderson with a plaque for being named the #1 woman in wrestling on the SHIMMER weekend, October 19-20, 2013.

But Varon is quick to dismiss any notion that she has retired from wrestling.

While working in a restaurant that serves fare like the “Fat Elvis” burger (peanut butter-stuffed, with peanut butter, fresh banana, applewood smoked bacon, and banana-infused ricotta cheese), it would be natural to expect Varon to have put on a few pounds since she left TNA in July, but that isn’t the case. Varon maintains an intense workout regime and appears to be in the best shape of her life. She looks fully able to step back into the ring at a moment’s notice. Her husband is also an incredible physical specimen with arms that would put most wrestlers to shame.

The Squared Circle is the Varons’ third restaurant. The couple previously ran Nicky’s in Lombard, IL., and Fat Tony’s Pizzeria in Louisville, KY. With The Squared Circle, the Varons decided to go with a full wrestling theme, which has helped it build up a dedicated following of area wrestling fans and a culinary destination for fans passing through town.