Some wrestling deaths don’t resonate with the social media-hip fans and wrestlers of today. But Roland Alexander’s passing on Monday wasn’t like that all.

Quickly, many tributes from huge names came pouring in.

Barry Blaustein, to SLAM! Wrestling’s Greg Oliver:
“He was a man who had incredible passion for wrestling and wrestlers and his work. He will be remembered.”

Allison Danger @allisondanger
Many condolences to the family and friends of Roland Alexander. He was always so cool to me whenever I was in the Cali area. RIP, good sir.

Christopher Daniels @facdaniels
RIP Roland Alexander. Very influential in my early career, and always passionate about this business. Thanks, Roland.

Todd Keneley @ToddKeneley
R.I.P Roland Alexander. He helped many great talents strive to live the dream in the wrestling biz & should be celebrated for his efforts. 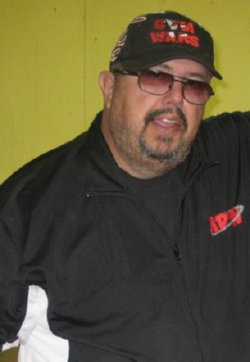 Bushwhacker Luke Williams
An old friend who I have known for many moons and was very lucky to have just caught up with him within the last 2 months passed away, ROLAND ALEXANDER. When you talk about West Coast Wrestling, his name, APW and the Garage will always come up as some of the greatest workers in the last 20 years have come out of his school. I just did a Seminar there and they have at least 2 guys I think will be in the WWE in the next 2 years. Talk about a PASSION for the business, this man had it as the boys were his FAMILY. I could go on about Roland but Marcus Mac, said, all that was was needed to say in his FB blog. Love you Roland, God Bless. RIP.

Melissa Anderson @FutureLegendCF
RIP Roland Alexander. Thank you for everything.

Scorpio Sky @ScorpioSky
One of the 1st promotions to say “this kids got it” was Roland and APW. I appreciated it then as I do now. RIP Roland Alexander. Thank you.

Matt Cross @MDoggMattCross
RIP Roland. Glad I got to wrestle for you and @allprowrestling. Experience meant so much to me I saved my envelope.

Drake Younger @DrakeYounger317
RIP Roland Alexander-Thank you for supporting & promoting the heck out of me sir. I’m proud to be a ‘Roland Guy’ #APW

Samoa Joe @SamoaJoe
Just learned Roland Alexander has passed. My condolences to all who knew him. One of the most passionate people I have ever met in wrestling

Steve Corino @KINGCorino
Woke up to the sad news that Roland Alexander passed away. He was always a good guy to me and loved the pro-wrestling industry so much. RIP.

Matt Hardy @MATTHARDYBRAND
Sad to hear that Roland Alexander has passed. Spent time w/ Roland in May, he was SO passionate about the biz & kind to me. God bless ya RA!

TJ Perkins/MANIK @MaskaraManik
Roland Alexander taught me one of the most important lessons I’ve ever learned. His advice helped me when I was homeless and got me back up.

Frankie Kazarian @FrankieKazarian
RIP Roland Alexander. From the UPW/APW Wars, & King of Indys where I met many friends. Thank you sir for your contribution to our business.

Joey Ryan @JoeyRyanOnline
RIP Roland Alexander. A guy who saw something in me and booked me in my early years. Grateful that I got to catch up with him last week.

A.J. Kirsch @AJKirsch
I fall asleep with a heavy heart after hearing that Roland Alexander has passed away. #ThankYouRoland. Pro wrestling will not be the same.

Bill Anderson
Very sad to report the death of wrestling promoter Roland Alexander today! I just heard the news and don’t know an exact cause! We had been friends for 40 years! Knowing Roland, he is organizing a great big wresting show in heaven right now with all the legends! Rest In Peace my old friend!

Sheldon Goldberg
RIP Roland Alexander. He was one of the leading independent promoters and trainers on the West Coast. At the time Roland started promoting, what we call “independent wrestling” was a new and emerging business. Roland was a pioneer who promoted a lot of great events and helped a lot of young men and women live their dreams. My deepest sympathies to his family, friends and all the members of his wrestling family.

Michelle Starr
RIP Roland Alexander. I always enjoyed working for you in California. You were a big part of the wrestling community and will be missed by many.

Mike Bucci (Nova / Simon Dean)
Roland Alexander was a bit of a carney , but in a good way..he gave a lot of guys their start…I’ll still never forget the image of him getting airplane spinned in the parking lot of Galaxy theater by Bassman! RIP Roland…

Mike Lano, photographer
Like most in 1971, Roland and I traded results and audio tapes taped off tv wrestling by mail. Whenever I’d fly up from L.A./Lebell territory to shoot Shire’s bigger Cow Palace shows; Roland and his closer friends Dave Meltzer, Steve Pardee and Ed Moondog Moretti were sitting just a few rows back from ringside, taking notes and taking every detail in and soon started an “outlaw” promotion at schools and real venues. Roland was always a total student of the biz and could talk about any global aspect of it. When he later started Pacific Coast Sports(which became All Pro Wrestling) first as a school using former Shire wrestler Ricky Thompson as his first Boot Camp trainer in the most diversified locker room I’d seen to that point in 1995, he soon began running house shows capped by his own version of Ray Stevens in Mike Modest. He intentionally gave the last name to some of his talent from his favorite workers like Paul Demarco, Jerry Blackwell and Solomon Grundy. Roland also continued until his passing, going to other promoter’s shows to study and learn. One would think he knew most everything but he always said that he never stopped learning about the industry and it’s constant changes. His school either begat from scratch or finessed Mat Hyson(Spike Dudley), Mike Lockwood(Crash Holly), Melissa Anderson, Sara Del Ray, Dhalip Singh(Great Khali), and tons of others from Donovan Morgan, Bison Smith on down. Danials and Kazarian sent a great tape to our Roland memorial show last Friday night at “The Garage” that was played and both came up from L.A. many times for Roland along with Samoa Joe from UPW. It’s sadly rumored to be the last Gym Wars unless someone buys the school and promotion to keep APW going and that appears to be a long-shot. We’ll all miss the road trips with Roland where he made sure the 3 or more hours of driving flew by in talking about the most obscure workers, refs, ring announcers and all aspects of the business he loved. And that flowed through his veins 24/7. Roland Alexander was pro wrestling on so many levels.

Mat Matters: A tip of the hat to the late Roland Alexander