Mat Matters: A tip of the hat to the late Roland Alexander

Almost all of us who worked in professional wrestling started off as fans. Some of us were able to live out their dreams and actually climb into the ring. Others sort of looked at the reality of things and understood any physical aspirations were never meant to be, but they knew they could still somehow be involved, as long as the will was there. Wrestling always has room for those who have the drive and the passion to be make it happen.

Such is the case with Roland Alexander, who died Monday in California, at age 59, after years of heart problems and battling diabetes. 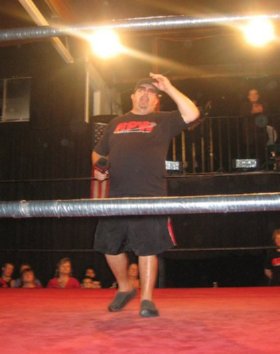 Roland Alexander in the centre of the ring.

Alexander grew up with all the stars of the Roy Shire territory in the San Francisco Bay Area.

Roland was not merely a casual fan: he wanted in, in the worst way, and was willing to fight for it. So he did anything he could to be close to “the boys” and maybe break into that secretive and remarkable world of professional wrestling, at a time when that was nearly impossible.

He carried bags around for Ed Wiskoski and Playboy Buddy Rose — two of the biggest names in the territory — and schlepped them around the towns throughout the Bay Area. Even though he was allowed to do this, it did not give him instant entrance to the business. He was able to witness things backstage, milling about with the likes of Rocky Johnson and “Superfly” Jimmy Snuka, but he was still kept very much in the dark — kayfabed — because he was viewed as an outsider. Rose and Wiskoski even poked at his slovenly, casual attire, and his short, rolly-poly body, dubbing him “The Miami Jew.” Roland did his best to take it in stride, because absorbing this type of abuse is par for the course in “paying your dues.”

Roland was friendly with other young fans who wished to be part of it all, like Steve Pardee and Ed Moretti. But while Roland was quite good in the ring (Moretti, who became the wrestler Moondog Moretti) once told me his work was very smooth), he did not have the size — around 198 pounds — not the overall physical gifts to take it to the next level (though he lettered in basketball at Tennyson High School in Hayward, Calif.). And while the wrestling scene in the Bay Area died off, and opportunities became fewer and fewer, Roland abandoned his dreams and settled into the role of an accountant, armed with a degree from Cal State.

Some dreams never quite die, though. Roland was doing quite well with his tax accounting work, but he knew there was something else waiting for him. Independent wrestling in California was at an all-time low, and Roland wished to change that. He took a major gamble in 1984 and turned his back on a stable career and jumped head-first into the unpredictable world of professional wrestling.

He started Pacific Coast Sports in 1991, with the aspiration of creating a thriving independent wrestling scene that covered California and surrounding states. Knowing there was a lack of good training facilities out there, he decided to take it upon himself to develop his own talent. Drawing on his old contacts, he brought in journeyman wrestler and shooter Ricky Thompson (who trained Afa and Sika Anoai) as his main trainer. And to promote his school, he even ran a commercial during WWF programming that featured Playboy Buddy Rose, who was just off his final national run.

Roland had the same mindset and nature of all the people he was exposed to in his early days in the business. Many called him a “carny,” and that’s precisely what he needed to be in order to achieve his goals. He could be gruff and somewhat shady at times, but he was no worse than any of the other promoters out there.

But what really set Roland apart is the quality of product that he produced — something that the majority of his contemporaries could never claim. From the stars he helped to develop (Mike Modest, Maxx Justice, Vic Grimes, Erin O’Grady, Matt Hyson, Bison Smith, Donovan Morgan, to name but a scant few) to the events he put on for more than 20 years (local events, an endless stream of Gym Wars shows, and the extremely influential King of Indies), Roland always deliverer the goods.

He is most famous for being featured in the documentary Beyond the Mat, which got him huge national exposure. Roland had hoped this would be the key to turning his small regional group into a true force. While it did help, it never did to the degree he wanted it to, and actually put a negative light on him as a person. (Roland always maintained that he was quoting promoter Roy Shire when he said, “You have to be a prick in this business.” But even if it’s not a Shire quote, if you ask anybody who’s been in the business, you understand the words are not entirely untrue.)

He was a lot of talk, but he backed it up a lot of the time, too. He would jump into he fire, not afraid to fail. He failed countless times, too, and still kept going. For over 20 years, Pacific Coast Sports and All-Pro Wrestling survived, like the cockroaches after the bomb, all because of Roland’s grit and determination. There’s a thousand and more stories of men just like Roland, with the same set of circumstances, trying to do precisely what he did, only to have their dreams dashed within a short span of time. Roland was one of the few who actually made a career out of it.

When you look back at what he achieved, you truly understand he is one of the most important figures in modern California wrestling history, and he deserves a tip of the hat from us all.