In Your House DVD a trip back in time

Nostalgia doesn’t exactly run deep throughout WWE’s The Best of In Your House DVD/Blu-Ray when compared to other productions focusing on particular time periods, but the selection of matches presents a comprehensive look back at the show that changed the landscape of PPVs. Remember, there were only five per year before In Your House started (and that felt like a lot at the time).

As opposed to, say, the recent Attitude Era collection that featured a narrated through-line with comments and recollections from many of those involved in the hugely successful period, The Best of In Your House does its best impression of Joe Friday and presents “just the match, ma’am.” You won’t believe who hosts your trip down memory lane, though: the one and only Todd Pettengill. He’s older, wiser, less irritating, and ultimately a perfect choice to host the program. 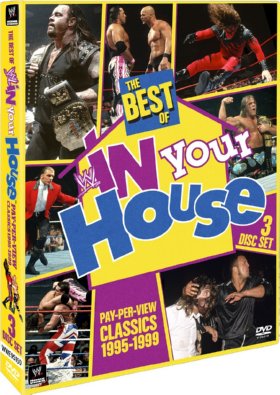 Surrounded by classic stand-up posters of Shawn Michaels, Bret Hart, Razor Ramon, Yokozuna, and other favourites of the time, Pettengill has a very limited role in introducing the matches. He provides no real background history on booking or other behind-the-scenes information (with the exception of his just-short-of-snide comments about Michaels having his troubles leading to the Dean Douglas/Razor Ramon Intercontinental Title match, and then later again with the Fatal Four-Way for the WWF Championship after a certain missing smile), so it’s really just on to the bouts.

As far as the match list is concerned, there aren’t any real surprises, either for what’s included or what’s out. The early “In Your House” matches features Triple H, The Rock, and Steve Austin, amongst others, getting their feet wet and establishing themselves as future stars. Unfortunately, there’s no sign of Kane wearing a dentist’s outfit.

It offers a pretty balanced offering from the first event through to the end of the road in 1999; remember when Triple H was spending his days with pig farmers and garbagemen? You can see his “this had no business being an entertaining match” against Henry O. Godwinn in an Arkansas Hog Pen Match. You can watch the blood flow freely from Bret Hart in his match against Davey Boy Smith, and HBK and Diesel chucking kitchen sinks at each other in a No Holds Barred match to usher Diesel on his way out the door to WCW.

There are championship matches, like the aforementioned Fatal-Four Way (I still don’t understand why Fake Diesel wasn’t a part of this match, or, wait, is that Kane wearing a biker’s outfit?), all the way to The Rock and Mankind giving every girlfriend in the world something to complain about as they did battle for the title on Valentine’s Day in 1999.

As for missing moments, there are no surprises, as I said, but there are always omissions that will mean more to some than to others. The Ultimate Warrior is missed, especially against Goldust, because the collision of these two great characters was fun to watch. Personally, I’d have liked to see The Undertaker dragging Diesel down through the mat during Big Daddy Cool’s match against Bret Hart, but the whole match isn’t really necessary to include. This is where a documentary style approach would have allowed for the inclusion of more moments (such as the power failure during In Your House: Beware of Dog that led to the repeat performance of the pay-per-view two days later).

Incidentally, in case you’re wondering, The Undertaker is not undefeated at In Your House.

Also not included is the ridiculous Tag Team/Intercontinental/WWF Championship match between Michaels and Diesel against Yokozuna and Owen Hart. That’s okay, though, because it was ridiculous. Plus, no Hell in a Cell between Undertaker and Michaels. That’s okay, too, because it’s been featured already on other sets. Instead, you get their first match from In Your House: Ground Zero in 1997.

This set does a decent job of showcasing some of the best performances from this series of shows, but I do believe the WWE is under-selling the importance of this event. The addition of In Your House not only upped the ante in terms of monthly pay-per-views, drastically changing the way storylines were presented throughout the year, but the show’s impression remained long after it stopped through the continued use of In Your House themes such as Judgment Day, Backlash, and No Way Out.

Final question: DVD or Blu-Ray? Well, the Blu-Ray will give you some Todd Pettengill outtakes (from his hosting of the feature, not from his first stint with the WWF), matches between Bret Hart and Steve Austin in April of 1997, Taka Michinoku and Brian Christopher from December, 1997, Michaels and Ken Shamrock from December, 1997, and D’Lo Brown against X-Pac from July, 1998.

Most wrestling fans go all gaga over anything Attitude-laced, but astute fans will want to watch these momentum-building years where the foundation for the huge success of the WWF in the late 1990s was set. I doubt there will be a follow-up documentary focusing on In Your House, but perhaps there is a Volume Two of these matches on the horizon. That would be a welcome addition to the video library, because there’s more to tell than most fans remember.