DETROIT — WWE Smackdown returned to Detroit for the first time since 2010 on Tuesday, for an entertaining, yet nondescript show at Joe Louis Arena.

With The Joe prepping for the incoming Stanley Cup Playoffs (the home Red Wings host the hated Anaheim Ducks for Game 3 on Saturday), the Smackdown and Main Event tapings brought some excitement into the building. 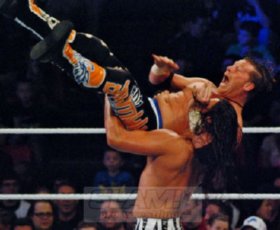 The evening kicked off with a dark match between the returning Curt Hawkins (having cut off his long locks) taking on Bo Dallas, who had a cup of coffee on WWE television earlier this year. Dallas won the match with a belly-to-belly throw.

The show continued with the taping of WWE Main Event, featuring the return match for the WWE United States Championship between Kofi Kingston and challenger Antonio Cesaro.

The two engaged in an absolutely fantastic 20-minute match that will be well worth your time to watch, especially for a spot by Cesaro that is unlike anything I’ve ever seen watching professional wrestling. If you are a fan of professional wrestling, I highly suggest tuning in to Main Event to watch the show.

Also taped for Main Event was a match between Justin Gabriel and Heath Slater.

Smackdown kicked off with WWE Tag Team Champion Daniel Bryan taking on the No. 1 contender for the WWE Championship, Ryback. It continued with a match between Fandango and Zack Ryder. Fandangoing was over while Fandango’s music was playing, but nobody was singing it during the match itself.

Also taped for Smackdown was a match between Ricardo Rodriguez and Zeb Colter, which featured some shenanigans, an arm-wrestling contest between Mark Henry and Sheamus and also a singles match between Damien Sandow and Randy Orton.

After his two appearances on WWE television last week in London, England, many fans were expecting to see The Undertaker live and in person, especially with his brother Kane involved in the Smackdown main event against Dean Ambrose of The Shield.

Unfortunately, the “Dead Man” appears to be off television for the time being after being dismantled by The Shield last week on Smackdown. The crowd, which was chanting for The Undertaker, seemed greatly disappointed.

In the post-show dark match, Orton and Sheamus, if you can believe this, beat Henry and The Big Show to send the crowd home happy.

In terms of crowd reactions, with no John Cena on the show, Kingston was a huge favorite with the kids, with them starting and sustaining many chants for the U.S. Champion during his match. In terms of a sustained reaction, Orton was the most popular on the show.

The crowd didn’t hate anyone with a passion on this night, but by the end of the night, The Shield were not well-liked men.

WWE will return to Detroit on Sept. 15 with the Night of Champions pay-per-view extravaganza. Tickets are on sale (for now) until Friday using the special pre-sale password “champion” at Ticketmaster.