Ella Waldek, one of the greats from the Golden Era of women’s professional wrestling, passed away on Wednesday, April 17, 2013. 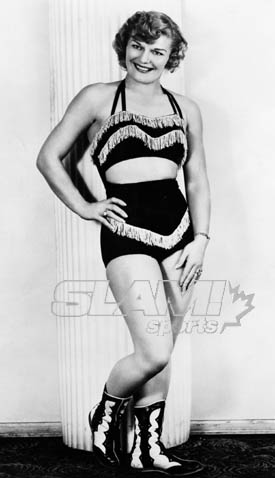 Being the fighter that she was, Waldek battled lymphoma cancer as far back as 1993, but stuck around.

Her story is one of highs and lows, and was documented in a lengthy article by Jeff Leen in 2011: Ella Waldek: A life of triumphs and tragedy.

In a 2006 interview with Jamie Kreiser Hemmings, Waldek was asked what made her such a great heel. It also gives you an idea of her personality.

“Money, fame,” she laughed. “I don’t know. I’m a very happy go-lucky, friendly person. Of course my voice has always been extremely deep so people think I’m harsher or meaner than I really was. Most of the time I did all the radio shows because they said my voice came over better on the radio and even television. It was a detriment to me because I didn’t get paid and I’d always have to earlier into town than everyone else. What do you do for four or five hours before the matches?”

Her toughness carried over post-wrestling, where she worked in retail security for two decades, primarily as a store detective.

Waldek shared a story of a fight in a store in the mid-’70s with Kreiser Hemmings.

“A crew of professionals that came in and they damn near killed me,” she began. “I was the only one on duty, the other girls were out to lunch. I was walking through the building and I saw what was happening and I decided I was going to get as many of them as I could. One of them karate chopped me right in the throat and I went almost through the glass window of the dining room. They took me to the hospital right away because they thought my neck was broken. I was off for about a year and a half.”

That particular incident also marked the end of her wrestling career.

On tour to promote the Lipstick and Dynamite documentary on women’s wrestling, Waldek came up to the Canoe.ca offices, along with Penny Banner and Ida Mae Martinez, in 2004.

While the online chat they did is an interesting read, they made for a fascinating trio. All three had survived some incredibly hard times, both before and after their pioneering wrestling days, and perhaps most importantly, they were thrilled to be in the spotlight once again.

Funeral arrangements are not known for Waldek at this time. She is survived by one daughter.

Ella Waldek: A life of triumphs and tragedy