Back in March, there was a whole lot of Internet scuttlebutt about Bobby Roode’s TNA contract expiring, especially with the Lockdown pay-per-view just around the corner.

He was four years into a five-year deal, but the automatic renewal didn’t take place.

Once the oversight was discovered, TNA management sprang into action to get the deal done. 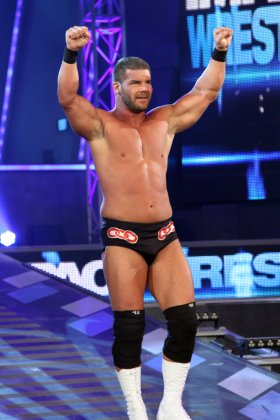 “Honestly with the TNA situation, a lot of it had to do with the visa paperwork and stuff like that, being a Canadian and having to come and work in the United States,” Roode told SLAM! Wrestling. “Everything just fell into place very quickly. It wasn’t like I was sitting at home for months at a time, stewing and looking for different things to do.”

Roode said there were other “opportunities” out there, but didn’t expand on that.

“I was trying to concentrate on staying here and looking towards my future, and getting to where I was going to be,” he said. “TNA wanted me here bad enough that we were able to work something out quickly. I’m happy for it.”

At the time of the conversation, Roode was TNA tag team champion with Austin Aries, though they lost those belts that very night, April 11th, to Chavo Guerrero and Hernandez in Corpus Christi, Texas.

“Obviously, being able to team with Austin has been a great experience, becoming champion in the tag team division again with him, and being able to compete with guys like Chavo and Hernandez. And getting the chance to work with Bad Influence, [Frankie] Kazarian and [Christopher] Daniels as well,” raved Roode.

“I’ve always said I was a fan of tag team wrestling in every interview I’ve done. Tagging with Austin has been a lot of fun.”

The other big change in TNA has been the move out of the Impact Zone in Orlando, Florida, and the show going on the road.

For a guy based in Peterborough, Ontario, about an hour east of Toronto, it’s added a bit of complication to his travel plans.

But it isn’t anything he can’t handle. 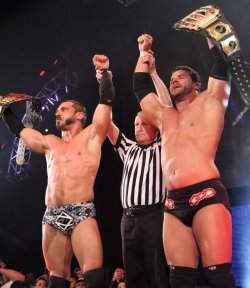 “It’s obviously not as convenient,” Roode said. “Let’s face it, for eight years, we were going down to Orlando. We were going to the same hotel, going to the same areas. You became quite familiar with the area. You didn’t have a problem getting in or out. You knew exactly how much time you needed to get to the airport and all that stuff. Now, it’s a little different that way.”

“Honestly, if I’m getting on an airplane, whether I’m flying to Florida, or flying to Texas, or flying to wherever, it really doesn’t matter. It’s really nice to be able to come to different places and do our television show in front of real wrestling fans, fans that want to be there, and bought a ticket. In Orlando, a lot of times in the Impact Zone, it was a great home for us, but a lot of times, they were just park people, and families that just came because we were one of the attractions in the park. So you didn’t always get that excitement sometimes during the show. Now it’s different. We look forward to that. The travel is a little more, but it’s a good price to pay.”