Championship Wrestling from Hollywood is making a move to national cable and satellite distribution on MAVTV, starting in May. David Marquez, the owner of CWFH, assured fans that the popular show won’t change. 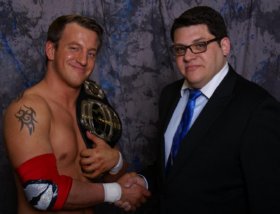 “I don’t want to change anything. I want to put the same show on the air, the same one that’s on KDOC,” Marquez told SLAM! Wrestling.

The KDOC-TV show, which airs at 1 a.m. locally in Southern California, has developed a following beyond the state since its 2010 debut.

That led to the national deal.

“We felt it was time, only because we were getting requests. People said they wanted to see it outside of California,” said Marquez. “So I said okay. I knew we could get on with them. I made a call and made a deal.”

MAVTV means that Championship Wrestling from Hollywood has access to 40 million homes in the United States. It will air on Wednesdays, 6 p.m. ET, and the show will continue on KDOC-TV.

What should fans unfamiliar with the product look forward to?

“I think they can expect a fun hour of entertainment, entertaining characters. That’s all we ever tried to do,” said Marquez.

Talent involved with the promotion includes Adam Pearce, Shaun Rickert (who Percy Pringle III managed, and is expected to sign a WWE deal soon), Scorpio Sky, Colt Cabana, and Ryan Taylor (“a controversial type guy who says what he wants, and we try to censor him, but we can’t,” said Marquez).

“It’s a great opportunity,” said Scorpio Sky. “Every week we will have a chance to draw in new fans, but the product will need to be top-notch to do so. As talent, we all need to step our game up. I welcome the challenge.”

“It is a wonderful opportunity to showcase what I feel is the best-kept secret in American TV wrestling on a bigger platform,” agreed Pearce. “More eyes on the product allows for a bigger chance to build valuable brand awareness, not just for the CWF Hollywood promotion, but for each member of the talented crew that brings the show to life. I’m happy and proud to have been with this bunch from the very beginning.”

The promoter/owner does not have any designs on taking over the wrestling business.

“I don’t think we can compete, in the sense of competing with a WWE or TNA,” he admitted. “I don’t even think they can compete with each other, to be honest with you. WWE is its own thing. It does what it does, and they’re good at it. We’re good at what we do, and all we want to do is really give people an outlet, talent an outlet to be seen.”

Pearce is proud of the show. “CWF Hollywood’s product is a throwback to when the wrestling did the majority of the talking on TV, and I think there’s not only market potential for that kind of old-time, nostalgic feel, but also a desperate need for it in our industry,” he said. “It allows us wrestling fans the chance to remember what we fell in love with to begin with and to then watch the same kinds of things happen all over again.”

Alumni include Joey Ryan and TNA announcer Todd Kennelly; the late William Moody, a.k.a. Paul Bearer and Percy Pringle was a manager for CWFH.

“Not yet. I’m in Southern California. The biggest competition is the weather, so it’s very difficult to do house shows,” said Marquez.

For years, Marquez was one of the leading proponents of the National Wrestling Alliance and its World title. Recently, he broke from the NWA, which is now under the leadership of Texas lawyer Bruce Tharpe.

“It’s confusing for some people who have always known me for the NWA, and being an owner in the NWA, having to explain everything,” he said. “It hasn’t hurt us at all, unfortunately, because I believed in it more than anybody.

“I don’t know who the biggest rube is, if it’s the people or me, for believing in a couple of letters. But I do think when we had it, we did the best we could by it and the people really got interested, for whatever that means. But has it hurt us? No. No one’s blinked.”