For All Mankind DVD showcases all three Foleys

For All Mankind: The Life and Career of Mick Foley DVD/Blu-Ray continues the strong autobiographical releases that WWE has become known for in recent years. The centerpiece of this latest collection is the new two-hour documentary which covers Foley’s career from the very beginning all the way to sometime just before this year’s WrestleMania.

The documentary includes not only a lengthy interview with Foley himself, but extensive commentary from Vader, The Rock, Jim Ross, Dominic DeNucci, Shawn Michaels, Triple H, The Big Show, Terry Funk, and many more. However, one prominent name from the WWE’s Attitude Era who was not part of this documentary was Steve Austin and none of the matches Foley had against him are part of this collection. 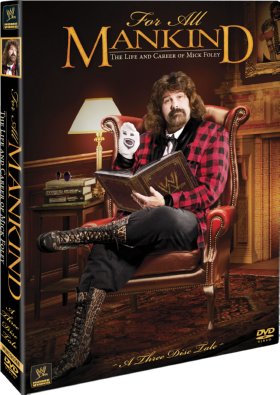 Regardless, the documentary is extremely strong, but it does cover some of the same ground found in earlier WWE releases about Mick Foley’s career, most notably the Mick Foley Greatest Hits and Misses DVD and the Mick Foley Hard Knocks & Cheap Pops DVD. This release represents the first time that the material and the stories of the different aspects of Foley’s career have ever been brought together in one documentary and other areas are dealt with in more detail.

For example, a greater amount of Foley’s childhood and high school athletics is covered to give the viewer an idea of some of the physical and mental preparation he went through prior to his creation in college of the Dude Love persona. Foley’s initial tenure in WWE and his time in AWA, Wild West Wrestling, and other promotions are given prominence before launching into his time in WCW. For the first time, Vader’s thoughts on his feud with Cactus Jack and the infamous incident that resulted in Foley losing his ear are discussed, and that is just the tip of the iceberg in terms of some of the new material.

The documentary also provides a great deal of discussion surrounding Foley’s comings and goings from the WWE over the last decade or so, ECW, his coming out of retirement for matches against Randy Orton, and later on Edge, his time as an author, stand-up comic, and some of his regrets. WWE has really done a very thorough job in illuminating every component of Foley’s career and what made him such a special performer.

As for the matches, included are some of the earliest Cactus Jack matches from the AWA, Wild West Wrestling, and of course WCW. It is with the AWA and Wild West Wrestling matches that you start to really see the development of Foley’s abilities in the ring and the Cactus Jack character. A 1991 Submit or Surrender Match between Cactus Jack and Sting is a real treat as both had great chemistry in the ring. There are also two ECW matches that are very physically intense, one of which is a May 1995 Barbed Wire Match against the Sandman, and the other, which is the 1996 CyberSlam match pitting Cactus Jack versus Shane Douglas.

From the WWE years the majority of the matches included mostly involve The Rock in some fashion. There are two matches against The Rock from 1997, the first of which has Foley as Mankind and the second has him in his Dude Love persona. Later on, the 1998 WWE Championship Match at Rock Bottom against The Rock is provided, along with a WWE tag team championship match between Mankind and The Rock versus Triple H and Shane McMahon. Of course, no Mick Foley collection would be complete without the infamous 1998 Hell In A Cell Match against the Undertaker and the 2000 edition which resulted in Foley’s retirement at the hands of Triple H is there as well. There is also a 1997 match against Triple H, a WWE tag team championship match with Kane versus the New Age Outlaws and a 1999 match with Al Snow.

However, none of the three matches when Foley won the WWE Championship are included, nor any of his matches against Big Van Vader, Terry Funk, Shawn Michaels, Randy Orton, Edge, or the aforementioned Steve Austin. Part of their omission may be due to the inclusion of many of them in the earlier WWE releases, but it would have been nice if a couple of them had been made part of this collection.

The Blu-Ray version includes five interview vignettes from throughout Foley’s career along with over 30 additional stories on a wide range of topics that are entertaining, touching, and amusing. However, both the DVD and Blu-Ray versions come with an unadvertised extra, your very own Mr. Socko sock, which makes for a fun keepsake.

Ultimately, WWE’s For All Mankind: The Life and Career of Mick Foley DVD/Blu-Ray is fun, nostalgic romp, which will bring back fond memories from the last couple decades of professional wrestling and is highly recommended. Once you’re finished watching you’ll understand why “Foley is Good!”