Jake The Snake turns CAC banquet into a sobering experience

LAS VEGAS — Of all the promos that Jake “The Snake” Roberts has delivered through his wrestling career, the one Wednesday night to his peers at the Cauliflower Alley Club in Las Vegas was the toughest. 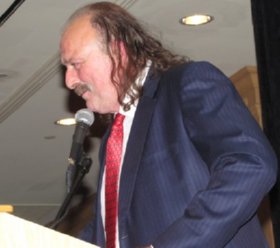 Jake “The Snake” Roberts on the podium. Photos by Steven Johnson

Though Roberts started off light — “I’m killing my gimmick,” he cracked, referring to being in a suit and tie, he turned sober, confessing that the next time that he expected to wear a suit would be at his own funeral.

He also admitted that he was ashamed that he had tried to kill himself on a few occasions.

However, buoyed by the support of three of his eight children in attendance, his friends and colleagues from the wrestling business, Roberts rose to the occasion at the 48th annual CAC banquet, where he was receiving a Men’s Wrestling award.

“I made a lot of mistakes,” said Roberts, freely confessing to his drug and alcohol problems, his family issues, and other demons. But he sees his recent transformation, where he has moved in with his friend Diamond Dallas Page (who delivered a great 10-minute introduction) and started to turn his life around, losing weight and kicking the habits, as a new start.

Or, as he put it in his soft but serious crawl, this stage is “the end of the beginning” and after 40 selfish years in pro wrestling, he hopes to use the next 20 to help other people straighten their own lives out.

“The Russian Bear” Ivan Koloff walked a similar path, and for him, it was God, not DDP, who helped him straighten out his life. Koloff received the CAC’s top award, the Iron Mike Award, named after the Club’s founder, Iron Mike Mazurki. 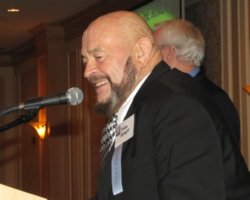 From a farm in the Ottawa valley in Ontario, Oreal Parris rose to become one of the top names in pro wrestling history. He made it to the top, including a short run as WWWF World champion, beating Bruno Sammartino in Madison Square Garden and silencing the crowd. “Man, that put my name on the map,” Koloff said.

Introducing Koloff was “The Boogie Woogie Man” Jimmy Valiant. “I’ve always considered Ivan family,” he said. “He always made his opponent better than he actually was.”

Koloff credited the fans, many of whom were in attendance in the room of 600 at the Gold Coast Hotel and Casino. “They lived to watch me get beat up,” he said, referring to himself as a “nasty old Communist Canadian Russian Bear.”

Former WWE champion Edge (Adam Copeland) was given an unexpected award. Copeland was scheduled to receive an award from the CAC in 2011, but was sidelined by neck injury, which would eventually lead to him retiring. He came out to this year’s festivities, along with girlfriend Beth Phoenix, on Wednesday afternoon, chipping in on a seminar by his trainer Ron Hutchison.

At the banquet, Jim Ross had the difficult task of surprising Copeland with an award, somehow stumbling through, as he joked, without Vince McMahon’s voice in his ear piece. 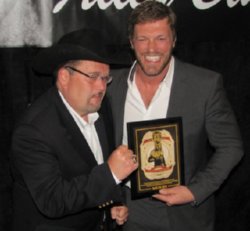 Jim Ross and Edge — for the benefit of those with flash photography.

“He was an ideal hand,” said Ross, who signed Copeland to a WWE deal in 1997. Ross said that the legend of Edge will continue to grow through the years as people learn to appreciate him even more, “because he was that good.”

Copeland started off his acceptance by saying “my mind is still reeling.” He credited all of his early trainers and influences, including Hutchison, Sweet Daddy Siki, Bret Hart and Leo Burke. He referred to his early days watching wrestling, and how he fell in love with the characters. “They were paiting the canvass printed in my frontal lobe.”

The night’s other top honor, the Lou Thesz Lifetime Achievement Award, was presented posthumously to William Moody, better known to wrestling fans as Paul Bearer and Percy Pringle III. Cowboy Bob Kelly talked about Moody, the 12-year-old fan he met in Mobile, Alabama, and how he rose in the wrestling business, and was Kelly’s right-hand man in Mobile for the annual Gulf Coast Wrestling reunions.

Accepting the award on behalf of Moody’s family were Ethan Emerson, one of his best friends, and former NWA World champion Adam Pearce, who worked with Percy in California for Hollywood Championship Wrestling. Pearce shared a touching poem, and said that Emerson, someone he didn’t know, called him after Moody’s death to pass on Percy’s message: “I love you and I’m proud of you.”