As the build for WrestleMania XXIX grew following the Royal Rumble, rumours began to swirl about the fate of WWE’s Divas on the biggest card.

While some speculation had Kaitlyn defending her Diva’s Championship, other word said that there would be an eight-woman tag team match pitting the current crop of female competitors against past sirens, including Maria Kanellis.

As things unfolded, however, the match was seemingly called off.

In an exclusive interview with SLAM! Wrestling, Kanellis confirmed that there indeed had been talk of the bout taking place.

“I did get contacted by WWE at the end of January, beginning of February, something like that, and for about a month, I was in talks with WWE,” Kanellis said. “We talked about contracts, I had no problem with anything that was in the contract; but about a month after, they called back and said they weren’t moving forward with the storyline.” 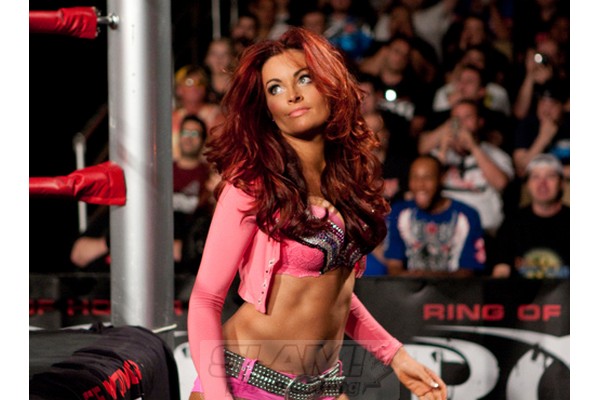 Maria Kanellis at a Ring of Honor show in 2012. Photo by The Masked SLAM! Wrestling Photographer.

As word of the match being cancelled grew, speculation arose that there were issues that some Divas had with working with the Ottawa, IL, native. Kanellis, however, refutes these rumours, stating flat out that there are no standing issues between her and her fellow Diva alumnae.

“I’m friends most of the girls, I talk with a lot of them at least once a week if not a couple times a week, so I don’t know where that comes from,” she said. “I’m completely happy with WWE and I believe they’re completely happy with me as well, so if that opportunity ever were to arise again and I wasn’t locked up on something else, I would love to go back.”

As she further notes, only two past Divas — Nikki and Brie Bella — were signed to WWE contracts, and as she says, “I can’t imagine them being that immature to say something like that. This is a business world and I treat wrestling as a business as well as my passion. I just can’t imagine anybody doing that and being that silly. As far as I know it was just a storyline thing.

“I was surprised (when she heard about the rumours). I get along with pretty much everyone; I don’t have those issues. I had disagreements with people in the past, but I really worked hard to get rid of those disagreements. I really want to live my life with positivity. I don’t want any kind of animosity out there about me. When I first got out of WWE, I was fiery and all that kind of stuff, but now, looking back, WWE was a great experience for me and I’m so glad I got to do everything I did there.”

While fans didn’t see Maria on the WrestleMania broadcast, they did see her quite active on Sunday night, as she spent time leading up to and during the event on Twitter, re-Tweeting messages from fans who supported a return to WWE for Kanellis, who left the company in 2010.

“I love the fans, they’re amazing,” she says. “They’ve followed me through everything — when I did side projects and worked for King of the Cage and all of those things, they followed me and I really appreciate that. Basically, me re-Tweeting what they were saying was me saying ‘hey, I hear you; I know! If that opportunity arises, I’ll be there for you guys!’ It was a friendly way of saying ‘hello’ back to the fans.”