Busick bullies his way through heart issue for ‘one more match’

At nearly 59 years of age, Nick Busick didn’t think that he’d be pumping iron to wrestle “one more match,” but then again he’s delighted to have the opportunity to give his fans a proper goodbye.

He almost didn’t have that chance because as “The Bully” tells it, he could have died in the center of the ring at any time during his wrestling career. At 6’0″ and 285 pounds during the height of his career, Busick secretly suffered from Chronic Atrial Fibrillation (A-Fib), an irregular and rapid heart rate that inexplicably accelerated in about “60 percent” of his World Wrestling Federation matches in the late 1980s and early 1990s. 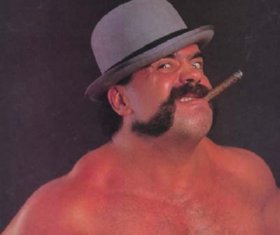 “I would get into the ring and I would ‘blow up’ (lose breath and tire) within two-to-three minutes of the match starting,” said Busick recently from his home in Weirton, West Virgina. The condition, in which upper chambers or atria don’t work correctly due to an abnormal electric activity, would kick his heart into overdrive. Sometimes the condition would stop itself, but others his heart needed a different kind of jolt. The powerhouse, who ironically clobbered an opponent with the “Bully Blaster” heart punch to finish matches, chopped himself in the chest as a way of regulating this heartbeat.

Busick remembers one matchup in particular against Ricky “The Dragon” Steamboat that was a close call. Even before the match began his heart raced so terribly that George “The Animal” Steele and wrestler-turned-road agent Tony Garea expressed concern over his unusual coloring and appearance. Busick simply shrugged it off, charged to the ring and wrestled the acrobatic and lightning-quick Steamboat. Catastrophe was averted time and time again.

“We were on the road all the time,” Busick continued. “I didn’t know what [the condition] was. I dismissed it as [performance] anxiety in the ring. Or I attributed it to being bodyslamed. It’s a wonder it didn’t kill me.”

Doctors never really had an explanation for the irregular heartbeat. It didn’t help that Busick didn’t take prescribed medicine or follow any doctor’s orders.

Busick was a world-class power lifter from his teenage years and throughout the 1970s. He even took a run at what was then Jim Williams’ bench press record of 635 pounds in 1971. Busick was able to heave 605 pounds, but an additional 30 pounds “crushed me,” he said with a deep belly laugh.

Steroids were rampant during that time and Busick never shied away from the subject. “I did more than dabble,” he said. “But only in [weight-lifting] competition.” When competitive lifting transformed into professional wrestling, he left the steroids on the shelf. “There was no need to use them.”

The Steubenville, Ohio native was originally drawn to the sport by “The Living Legend” Bruno Sammartino, Dominic Denucci and others from Pittsburgh’s famed Studio Wrestling days. “I was six years old and I fell in love with it,” he said. “Bruno was my hero, no question.” Sammartino was universally recognized as one of the strongest men on the planet, having bench-pressed 565 pounds in 1959. That intrigued a young Bully-to-be.

Busick worked as a police officer before convincing well-known wrestler-turned promoter Mike Paidousis to train him for the ring. Paidousis saw something in the strongman and provided one week of professional training. In May 1978, Busick wrestled his first World Wide Wrestling Federation (WWWF) match against Billy Red Lyons in what was then Pittsburgh’s Civic Arena. “I was scared to death,” Busick said. Weirton’s favorite grabbler was not victorious in his first go-round.

Busick would continue to wrestle for the WWWF for the next few years, losing the vast majority of his matches. “They kept booking me and I learned in the ring.” 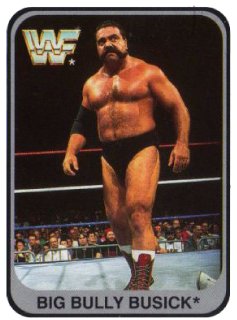 Busick relocated to Atlanta’s police department in the early 1980s but the wrestling bug didn’t stay home. It was there he worked with Jerry Blackwell, another wrestler doing more business as a promoter. “Jerry was very key in giving me my first push,” Busick added. Next, all he needed was a catchy persona.

Busick earned respect from his peers, including Dick Slater, Abdullah the Butcher and Bruiser Brody. “They didn’t share much,” Busick said. “You weren’t going to get much from them if they didn’t respect you.” They liked Busick.

It was also then the Bully met wrestler Bill Eadie, who he describes as a “class act.” Eadie, of Brownsville, PA is immortalized as one-half of WWE tag team champions Demolition. The two would ultimately work together in high-risk, bodyguard security in and around Atlanta.

Busick’s highest-profile wrestling break occurred in in 1989 when he debuted in the World Wrestling Federation as a children’s balloon-popping, popcorn-spilling cad. He wrestled some of the biggest names of the era, including Bret Hart, Sid Justice and Jimmy “Superfly” Snuka. Busick’s WWF career was relatively short. He left in 1991 and returned home to Weirton.

Although it’s been more than 20 years since Busick’s departure, “Big Bully” lives on. His character recently wound up #17 on a website list of the now-WWE’s “Most Absurd Superstars.” Meanwhile, his impeccable facial hair topped the organization’s list of the WWE’s “Greatest Mustaches.”

“How about that,” he howled. “They are keeping the Bully alive.”

Staying alive has been a true gift for wrestler, as atrial fibrillation altered his life. In 2005 while doing 10-second wind-sprints on a gym’s treadmill, Busick’s heart was racing more than usual. After the last set, his pulse wouldn’t regulate. He got off the exercise machine and announced to a nearby athlete he didn’t feel well. Soon he was on one knee and then he collapsed outright and went into Sudden Death Cardiac Arrest.

Luckily the gym staffers had a defibrillator, and after five cautious minutes of treatment, Busick was brought back to life. He says his own “near-death” experience taught him that “people shouldn’t be worried about dying. It’s very peaceful,” then he adds softly, “As long as you’re right with God.”

Moments after being shocked back to life, several MMA fighters who were training in the gym encouraged Busick to take an ambulance ride to the hospital. In true bully fashion, he refused and simply walked out of the fitness center.

Three years ago Busick underwent eight hours of surgery where surgeons electrically re-mapped his heart. “It’s been good ever since.” Episodes of atrial fibrillation have ended.

A few years ago, he refereed a match for Jugan’s Western Pennsylvania School for the Deaf fundraiser and he was a highlighted speaker of a lighthearted “roast” of Denucci in December, 2011. Other than a few other appearances at fan fests, Busick has kept a low wrestling profile. 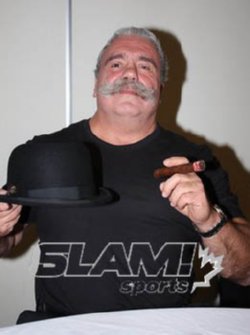 Nick Busick in December 2010 at a Wrestlefest fan fest in Essington, PA. Photo by Christine Coons

Over the past two years, because of a renewed interest in healthy eating alternatives, he’s been marketing amino-acid rich Billy Bully Sports Nutrition bars and related merchandise. He continues to work as a Senior Investigator with CCI — Criminal and Civil Investigations — a Weirton-based firm specializing in background checks, drug testing and other services (criminal-civil.com).

Busick continues to work in the fight game by promoting MMA fights (two were held last year and two already have been scheduled for this year, with the possibility of a third). He also spends as much time as he can with wife Lorie and family.

He tale of Big Bully could end there, but it doesn’t. The lure of professional wrestling has come calling one last time. Busick will headline a card on April 19 at Krazy About Sports, 2850 Weir Avenue in Weirton. Tickets are $12 for adults, $8 for kids (fswwrestling.com for more information). He is preparing to face the 6’5,” 275 “Red Knight of Germany,” Josef Von Schmidt is a No Disqualification “German Bodyslam Match.” It’s a prospect he relishes.

“There isn’t a better fan in all of sports than a wrestling fan,” said Busick. “I had a mid-level career, but a wrestling fan knows their athlete from beginning to the main event. They are the best.”