“I was hoping I would make it tonight, unfortunately the cancer radiation treatment has got the best of me. Plz tell all hello, especially Dominic. I apologize for not coming. I hope I get my health back so I could make it. Nick (Bully).” Nick Busick had hoped to be a part of Pittsburgh’s Keystone State Wrestling Alliance (KSWA) Hall of Fame on March 24. It had become a tradition for “Bully” since his own induction along with James J. Dillon in 2015.

In recent years, Busick gave back to the professional wrestling business more than most. The last chapter of his wrestling voyage began on December 3, 2011. He attended a lighthearted “roast” of one of his heroes: Dominic DeNucci. Busick spoke eloquently about DeNucci and Dominic’s best friend Bruno Sammartino. Busick pointed to those two wrestlers as inspiration for his career. 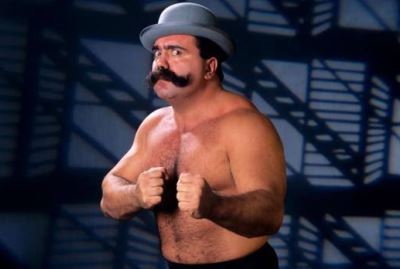 Busick, in his late 50s, continued to hit the weights hard and wrestled whenever he wanted. He had long established a career as an investigator in high-risk security, so he didn’t often sign autographs and take pictures to make a living on the weekends. But he did dabble whenever he got the itch. By his own admission in a Bill Apter video chat, Busick said he had only worked two matches in “about 20 years.”

On April 17, 2013, the Bully made the front page of the sports section of the Weirton Daily Times, in advance of his retirement match. In the feature, Busick detailed how chronic atrial fibrillation (a-fib) attributed to a near-death experience (he collapsed during a gym workout and workers there used a defibrillator to re-start his heart) in 2005. Busick also disclosed how surgeons completely re-mapped his heart to correct the ailment in 2010.

In December 6, 2014, Busick joined Hacksaw Jim Duggan and others at KSWA FanFest, where he joyfully signed autographs and took pictures with fans. It began an annual tradition for Busick to visit with fans and other legends.

In March 2015, Busick and James J. Dillon were inducted into the Keystone State Wrestling Alliance (KSWA) Hall of Fame. Busick’s induction was announced, while Dillon’s came as a surprise. (Both men consider Pittsburgh to be the start of their careers.) Dillon was on hand to serve as manager to Blanchard in his attempt at the KSWA Championship. Busick volunteered to serve as then-champion Shane Starr’s second.

Little did anyone know, but just days before his Hall of Fame induction, Nick Busick began having trouble swallowing. He had been training for a Senior’s Division weightlifting competition when he started to feel off. When blood gushed from his throat a day or two later, doctors told him that he had esophageal cancer, stage 4. “I nearly bled out,” he said then. Medical professionals didn’t give Busick much time at all.

Instead, after surgery and chemotherapy, he continued on. Incredibly, he also defied doctor’s orders (he rarely listened by his own admission) and started to lift weights whenever he could.

Medical professionals agreed that it was Busick’s fanatical drive that kept him alive. His remarkable tale was first detailed in a Pittsburgh Sporting News piece in June 2015. The piece was read by KDKA TV News Videographer L. David Colabine, who coincidentally met Busick while covering a sports feature on the KSWA. Colabine reached out to Busick and they set out to chronicle the journey.

Nurse Kelly Sikora noted that Busick had renal failure and problems with his kidneys. “I couldn’t believe he was standing in front of me,” said Sikora in the broadcast. Busick acknowledged later that the cancer was keeping him down, and he couldn’t get out of bed at times.

The first “Big Bully” news feature earned Colabine a Golden Quill Award by the Press Club of Western Pennsylvania. It was nominated to a Daytime Emmy but didn’t win.

The television piece provided a comprehensive look into Busick’s battle, recovery and visit to Pittsburgh wrestling. At the time he was deemed “cancer free.”

The Bully even hit the local inspirational speaker circuit. He occasionally spoke to groups about his battle.

Busick continued to make occasional appearances at wrestling shows. Including a December 2016 visit to KSWA FanFest where he inducted Bill Apter into the Hall of Fame. He also had the opportunity to talk with Ax and Smash (Demolition) DeNucci, Shane Douglas and Ricky “The Dragon” Steamboat. Busick had noted in the Weirton story that he wrestled Steamboat once in which he suffered an a-fib episode. Busick had worked in security with Bill Eadie years ago. 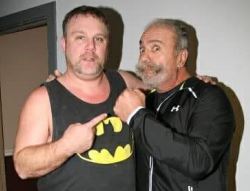 In March 2017, Busick returned to induct Pittsburgh Studio Wrestling legend, “The Fighting Cop From Carnegie” Frank Holtz, into the KSWA Hall of Fame. Busick excitedly asked to do the honors, as both retired wrestlers were also retired police officers. No one not named Holtz was more excited that night than Busick.

Busick’s health declined later in 2017. Colabine returned to meet Busick. Nick missed his first FanFest in several years and sent his apologies. On Christmas Day 2017, a follow-up piece on Busick’s condition ran on the local Pittsburgh CBS affiliate. This time instead of esophageal cancer, doctors were treating the same type of mass, which this time settled in his brain. Scars and staples ran across Busick’s head, but his passion for life never wavered. In fact, just a few days after the surgery, Busick posted pictures on his Facebook page where he was out and about with his son Branko at an MMA fight.

The second news feature on Busick won the regional Edward R. Murrow Award for journalistic excellence. Busick congratulated Colabine, but signs of catastrophe were evident. On April 25, Busick texted that he was taking it “one day at a time.” The text featured a number of emojis (Busick used them a lot).

“He was a great man who stared at his own mortality and fought to live as long as he could for his family,” noted Colabine. “It was my honor to know him.”

Upon hearing the news, Bill Eadie messaged: “Terrible news. This saddens me. Nick was such a good man. To have gone through what he had to endure is overwhelming. He is going to be missed by many.”

Busick bullies his way through heart issue for ‘one more match’