View from the press box: WWE came through with the spectacle again

EAST RUTHERFORD, NJ – Another WrestleMania is in the books, and it felt like one destined to be remembered as good but not great. That wasn’t the fault of the talent, as everyone on the card worked their butts off as usual to entertain the 80,676 fans in attendance at MetLife Stadium.

The Undertaker-CM Punk match stole the show as many people expected it might, with the Deadman being his usual incredible self and Punk (along with Paul Heyman) doing an outstanding job reacting to what was happening. Triple H and Brock Lesnar waged an appropriately hard-hitting affair, while The Rock and John Cena gave their all to restore the energy level of the crowd after it hit some lulls.

No, what held back WrestleMania 29 from going down as one of the best shows ever was that the whole thing felt a little safe. There were no real surprises in terms of the finishes or how they came about. Some of the matches hinged on the most predictable possible actions, like Big Show turning on Randy Orton and Sheamus. It was all very straightforward and by the books. 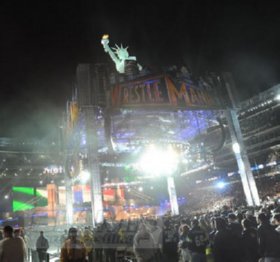 The ring at WrestleMania 29. Photos by Mike Mastrandrea

But as a symbol of the WWE’s strengths, namely creating a spectacle, merchandising and promoting its brand, this was an event worthy of the hype around it.

The most obvious signs of that were the visual ones. Seeing over 80,000 fans packed into MetLife was amazing by itself, and the set design people outdid themselves. First revealed a few days before the show by Vince McMahon himself on Twitter, the replicas of the Empire State Building, the Brooklyn Bridge, and the 67-foot Statue of Liberty perched high above the ring were breathtaking in person.

They also lit up once the sun set, adding some extra punch to the visual impact of several wrestlers’ ring entrances. Cena stayed true to his word and toned his ring walk (run, really) down, but other superstars went the other way and took theirs up a notch.

Chris Jericho lit things up with his clothes and a big burst of fireworks. Punk entered with the band Living Colour enthusiastically performing his entrance music live, though his opponent topped everyone as he often does. The Undertaker rose ominously from below the ramp, the hands of lost souls grasping at him as he walked, and the fire that shot up from the set when he made it to the ring was so hot it could be felt inside the enclosed press box.

That same attention to larger than life backdrops extended to other events during WrestleMania weekend. Axxess, the company’s long-running fan festival, was held in the Izod Center right across the parking lot from MetLife. With less floor space inside the arena, there were less hands-on activities than in years past, some of the sponsor booths were relegated to the concourse, and the display of vehicles ended up outside the building.

What there was room for was both a ring with an entrance ramp and a separate full-sized Raw set at one end of the floor. Attendees took in the action from general admission seats up in the stands — something that wasn’t possible when Axxess was held in convention centers — and waited for their turn in the autograph lines. The WWE has that part of the event down to a science, and plenty of people happily pay extra for a VIP ticket to get signatures from the promotion’s biggest stars. 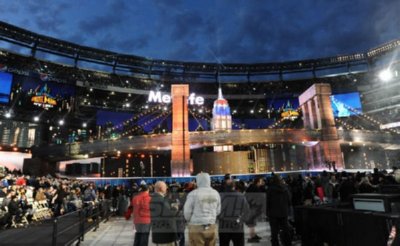 Brooklyn Bridge made it to WrestleMania too.

Not surprisingly, there were all kinds of booths and trucks to buy merchandise around the entertainment complex grounds, though most featured only the top selling items that the WWE brings out on the road. The big selection, including WrestleMania 29 gear not sold anywhere else, was in a Superstore that was inside the stadium gates. The huge line waiting to get inside after the show was over was all the proof needed to show how that worked out, and smart money says the Superstore will be back in New Orleans next year.

There’s always another spectacle somewhere on the horizon, after all, and no matter what matches end up on the card, it’s a safe bet the WWE will come through in that respect once again.