WrestleCon delivers a who’s who of wrestling

SECAUCUS, NJ – On Saturday, wrestling fans of all ages got a chance to meet some legends of the business, as WrestleCon kicked off the first of its two days at the Meadowlands Expo Centre in Seacaucus, NJ.

Unlike at the WWE Hall of Fame ceremony held later in the day, WrestleCon attendees weren’t confined to watching the stars from a distance at the event. Rather, they were encouraged to meet, greet and interact with their heroes up close and personally, during autograph and photo op sessions. 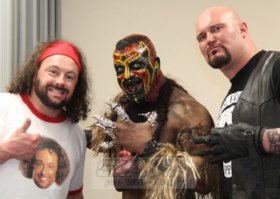 Where else would you find Eugene, the Boogeyman and DOC other than at Wrestlecon? Photo by Christine Coons

A veritable who’s who of wrestling’s past and present appeared at the show that it would take several pages to name them all. Some of them — and this is only a small percentage of those on hand — included: Bret Hart, Kevin Nash, Diamond Dallas Page, Jake “the Snake” Roberts, Kurt Angle, Rob Van Dam, Lita, Bobby Heenan, Lex Luger, Jimmy Snuka, Ted DiBiase, the Iron Sheik, Kelly Kelly, Kevin Sullivan, Tommy Dreamer, Beth Phoenix, Goldust, Raven, and Demolition. A fun option allowed fans to meet some of wrestling’s most infamous “gimmick” wrestlers such as the Boogeyman, the Shockmaster, and even the Mean Street Posse.

The show’s biggest name on Saturday was also the biggest name ever in wrestling, the one and only Hulk Hogan. Hogan has a seemingly instinctive ability to make any fan that he meets feel like a champion. He spends time talking with every fan, and when he’s with them, he makes them feel like the most important person in the world. While there were only a limited number of VIP tickets sold to meet him, because he spent so long with each fan, organizers were panicked that his sessions would run much longer than planned. But that just gave those people a chance to experience other aspects of the event.

Like the merchandise tables. Scores of vendors, such as Highspots.com (the partner site of the SLAM! Wrestling store – cheap plug), RF Video, and the Barbershop Window offered their inventory of wares, like figures, DVDs, masks, and other assorted memorabilia. Bottom line – if there was something wrestling-related that anyone was looking for, chances are it was available. Hopefully this writer will be able to find a large gym bag there tomorrow, because his purchases won’t fit in the one he came to NY/NJ with.

In addition to all of that, Saturday’s session also featured a number of great wrestling shows from: SHIMMER, CHIKARA, Dragon Gate USA, and 5 Dollar Wrestling. If they were all as good as the little bit of the SHIMMER card that this writer saw (including matches featuring Awesome Kong and Cheerleader Melissa, Canadian stars Cherry Bomb, and Lufisto) then they will certainly have received their money’s worth.

As much as the fans enjoyed the event, WrestleCon also gives the wrestlers a chance to catch up with old friends, and also make new ones. Some of the best moments at the show are those that aren’t necessarily part of the planned activities. Things like seeing Tommy Dreamer circle the room and take pictures of himself with Jimmy Snuka and the Mean Street Posse, and then lock up with Goldust while the Boogeyman chants for them to fight. Things like seeing D-Lo Brown, Mike Knox, and Drew Hankinson happen to meet up as the show was wrapping up and hold an impromptu Aces & Eights photo opportunity for the lucky fans on hand to see it.

For this writer, the fun of WrestleCon can be summed up by one experience. A little girl, about five or six years old, was in line with her parents to meet Bobby “The Brain” Heenan. The girl was looking around at all of the other displays and tables, and not really paying attention, presumably because she didn’t know who Heenan was. Heenan saw her, and when her back was to him, he suddenly slammed the table top hard, using his ring to make a loud bang in order to startle her. The girl shrieked and jumped, scared by the sound. She turned around, and Heenan was playfully waving at her. The girl giggled and then laughed out loud at the prank, and after posing with him for a picture, turned around and gave him a big hug – a moment that she, and I suspect he, will not soon forget.

Bob Kapur has fully recovered from his food poisoning, and will be back at full speed on Sunday for a stop at WrestleCon day two before heading to WrestleMania. He can be reached at [email protected].