SECAUCUS, NJ – Combat Zone Wrestling’s slogan is “Like nothing else.” One couldn’t agree more actually. Where else can you find an owner who welcomes his fans by a “You can s*** my d***”, a ring announcer with an iPad instead of cue cards, an Ultra Violent Grudge Match, fences with gusset plates on and some good ol’ Rick Astley music. Well it was all that, and then some more at CZW’s Wrestle-Con show Friday night.

Pushing the limits to what ultra-violence can be, CZW champion Masada retained against Big Japan’s Crazy Monkey, Jun Kasai. If chairs and to a certain extent barbwire are often-used weapons, two walls of glass, fences with gusset plates on and bamboos skewers are what ultra-violence is really about. At one point, Kasai put glass in his mouth and spat it away. One shouldn’t be surprised if both of them wore crimson masks, the expression not being strong enough to describe Kasai’s face actually. 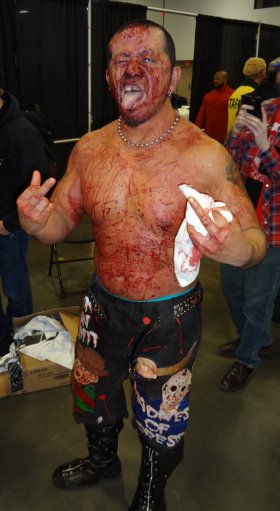 Jun Kasai after his match. Photo by Pat Laprade

“It’s really ready to go to battle,” said CZW’s owner DJ Hyde about these two guys. “To do a match like that, you really need to mentally prepare yourself and with the Crazy Monkey and Masada, you have two of the best out there.”

In their first encounter ever, Sami Callihan defeated Brian Kendrick with his Stretch Muffler submission hold in a good built match. With all the rumors out there concerning Callihan and a possible WWE contract singing, he made sure to tell SLAM! Wrestling that he had something else set.

“I’m booked for a three-month tour on Mars. It’s actually gonna be the first indy wrestling show there,” joked Callihan, adding that he was happy with his match against Kendrick, considering this was his fourth match of the night, after three with Evolve.

Two of the most hardcore guys out there, “Ultraviolent Shooter” Drake Younger and “Deathmatch Drunkard” Danny Havoc were also squaring off. In one of the spots, Havoc thumbtacked Younger in the face. To retaliate, Younger thumbtacked Havoc too, but directly on the tongue! If these two spots got over big, the end of the match wasn’t much of a crowd pleaser as it was ruled a no contest. The pull apart after the match didn’t really made up for it.

Colt Cabana and Greg Excellent worked a good comedy match that saw Colt making out with Greg’s mom on some Barry White song before she punched him in the gutter, Colt and Greg doing some of the Superstars finishes and more of Rick Astley’s “Never Gonna Give You” up after Excellent’s victory.

“CZW tries to get everybody something,” said Hyde, one of the masterminds behind the WrestleCon concept. “You have a great match with the Aerial Assault with some of the best high flyers in the world, and then a nice storyline match with The Front against Gulak’s campaign, hot women, you have Greg Excellent and Cabana as a feel good comedy, and at the end it’s ‘Oh my god, this is getting real’ with blood and everything. It’s something for everybody. It’s what I like to call a variety act or a buffet table of professional wrestling. “

In the other matches:

In a non-wrestling segment, Pepper Parks and Canadian’s own Cherry Bomb showed the crowd how to exercise and get in shape in some explicit ways.