METUCHEN, NJ – If New Jersey is not at the moment the centre of the wrestling universe I dare anyone to find another. The Pro Wrestling Syndicate was presenting its Supercard night two Friday evening, just one of the many WrestleMania-related activities in the New York and New Jersey area this weekend. Like a great meal, this show was the perfect appetizer to get you ready for the main course on Sunday. 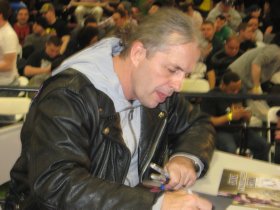 A crowd of around 2,000 showed up at the Sports Plex in Metuchen, New Jersey and no one left unhappy as there was something for everyone. It all started at 6 p.m. with a meet and greets headlined by Canadian Bret Hart and featuring as well Superstar Billy Graham, Lita, Sabu, Tommy Dreamer, Tom Prichard, and the Rock and Roll Express, among many others.

I have to say that for a Canadian boy like me from Montreal, where we had no NWA shows in the 1980s, seeing Ricky Morton and Robert Gibson was very special and something I can finally scratch that from my bucket list. For such a big gathering of wrestlers they did a fantastic job to keep the meet and greets portion of the show to around the two hours it was scheduled for. Everyone was satisfied, as fans from different countries gathered together all ready for a great night of professional wrestling.

The best match of the night was between Trent Baretta and Alex Reynolds. They had a great match, making you wonder how WWE could have granted Baretta a release not so long ago; Alex Reynolds was a pleasant surprise as well keeping up with Baretta all the way. Even in defeat Baretta got a standing ovation from a very appreciative crowd of regulars PWS fans and from the many WrestleMania tourists drawn to the show by the incredible line-up.

The most awaited match was the dream encounter of John Morrison with Japanese legend Jushin “Thunder” Liger. They had people behind them all the way with the crowd reacting to all of their signatures spots. This was not the best Liger match I have seen, but I will take a match featuring Liger any day over many others. Before the match, Sabu made an appearance to the crowd’s delight, showing respect to both men and shaking their hands before letting them perform the match that many had paid to see. Morrison got the victory but was on his knee saluting his opponent with the crowd responding with a very loud chant for Liger. 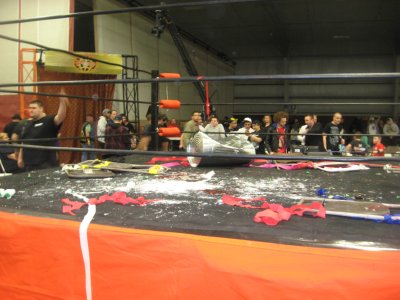 The ring was a mess at the conclusion of the PWS show.

The final match of the evening was what was billed as ECW legend New Jack’s retirement match as he battled the Necro Butcher in an incredibly violent fight that saw him get his hand raised. He then did a very emotional speech about his career, his friends like Marty Janetty and The Rock and Roll Express, who were paired with him in his first major program around 20 years ago in Smoky Mountain Wrestling. He also made sure we all knew how much of a class act PWS is and how important for him it was to have this match for them and all their fans.

The show ended with almost the whole roster in the ring with New Jack, making the famous X symbols with their arms that was one of New Jack’s signature during his career. Earlier in the evening Chris Chetti and Hollywood Nova teamed together for the last time as well, defeating Hurricane Helms and Starman (yes, the same Starman who was part of the original Nintendo wresting game!). Chetti was coming out of retirement to wrestle that one last match with his best friend in front of his wife and five children. Mike Bucci (Nova, later Simon Dean) also gave a short but very emotional speech after their match. Slowly more and more ECW warriors are leaving the business for good leaving us with great memories of an era that was truly special.

There was also a mocking of Bret Hart by the major faction in PWS called Reality Check that led to an angle with the Black Hollywood crew that will be continued at the PWS next show on May 11 ! Check them out if you can!