Robbie E is Robbie E, from the hair down to the toes, bro. It’s not a character, he stressed to SLAM! Wrestling earlier this week.

A member of the TNA roster since August 2010, Robbie said it has been simple keeping it fresh.

“Easy, it’s not a character, it’s really who I am,” Robbie E said. “My hair’s up right now, I’m wearing Robbie E clothes right now, I say ‘bro’ after every sentence I say. I’m about to go to Office Max to buy some ink for my printer and I’m going to say ‘bro.'” 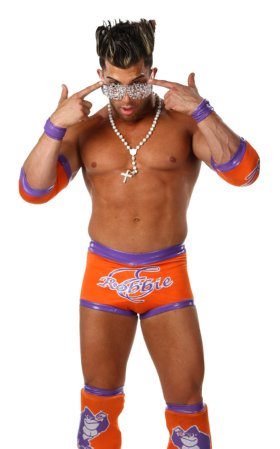 Of all the questions asked, the talk of the pumped-up ‘do elicited the most passion.

“There’s different hair days,” he explained. “If I want to make it look really good, we’re looking at an hour. If it’s an okay day, maybe a half hour. If I’m just going to the gym, maybe 10 minutes. It’s a lot of hair glue, I go through a lot of jars of hair glue by the week. After that, it’s a lot of hair spray, and a lot of electricity from my hair dryer, which is on my hair the whole time I’m doing it.”

As TNA Impact hits the road more and more, for taping the weekly TV show and pay-per-views (such as Lockdown on March 10 in San Antonio), as well as the regular house shows (Detroit and Grand Rapids, Mich., this Friday and Saturday, and Bowling Green, Ohio, on Sunday), he feels supported by the company.

“Whenever we have Impact Wrestling events, there’s makeup ladies there … that have all the stuff if I want it. There’s a specific hair dryer I need and specific Robbie E hair glue I need and a specific kind of Robbie E hair spray that I need. I choose to bring my own stuff because I would not trust anyone with my hair, no matter who it is.”

The 29-year-old Robbie E (born Rob Strauss) truly enjoys being away from home, which is New Jersey.

“Traveling is my life, man. I love it,” said the 5-foot-11, 201-pound Libra. “I love going to different gyms, different restaurants, meeting new people, the plane rides — it never gets old. Other people get tired of the road life, but I love it.”

The TNA Impact crew recently got back from a trip to the United Kingdom.

“Wrestling anywhere, wrestling in the States, no matter where we go, Impact Wrestling shows are always an 11 out of 10, they’re always awesome shows,” he said. “The UK fans are very appreciative.”

It’s exciting to bring the show on the road. “It’s always good to hit up different crowds, bro. We’ll be interacting with fans that don’t regularly get to see our product, so they’re going to be more energetic than ever. It’s going to be new for them, so it’s exciting for everybody.”

Another thing that Robbie E loves is the ability to interact with his fans.

“I love social media. It’s awesome, man,” he said. “Whenever you’re bored and have got nothing to do, you get out and write something. I know if I write something on Twitter, I know 50,000 people are reading it. My website keeps old photos of me, videos, links, what’s going on, where I’ll be next on my schedule. I have a Facebook page. Even eBay items I have for sale I can post on there. It’s something that can always keep yourself entertained.” 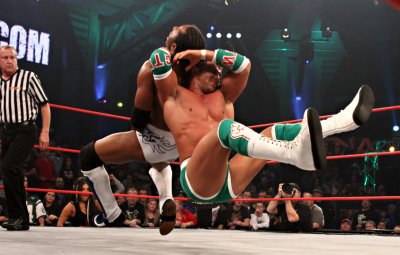 There have been a number of times that Robbie E has been a featured performer on Impact, including his early days with Cookie (Becky Bayless) as two Jersey Shore-types, and his run as TNA X Division champion (beating and losing to Jay Lethal) and as TNA TV champion (beating Eric Young, losing to Devon).

He brushed off the idea that he was waiting for a meaty storyline.

“I don’t really know what ideas I’m being patient on, bro,” he said. “I don’t know what any of that means. I’m Robbie E and I get paid to be a professional wrestler and wrestle on Spike TV every week and travel. I can honestly say that I’ve got the job that I wanted my whole life. I’m happier than ever, bro.”

For the last while, Robbie E has had Robbie T (Rob Terry) as his partner/lackey. Things are a little off-kilter at the moment, he said. “He’s been playing me up lately. He showed me up in my own Bro Off. He kissed Miss Tessmacher, which kind of made me mad because I had the hots for her. I paid him to be my bouncer, and he’s kind of messing up. We’re kind of rocky right now.” 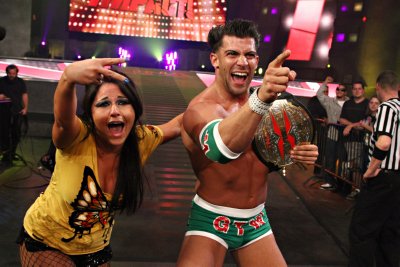 Cookie and Robbie E with the X Division title.

The Aces & Eights saga, with the invading gang slowly being revealed piece by piece, has been ongoing in TNA. Lockdown will feature a Lethal Lockdown match with a four-person Aces & Eights team, headlined by Devon, against TNA’s team, helmed by Sting.

Robbie E vows he is on the side of TNA.

“I’ve got to say, Sting, whatever guys he chooses to be on his team, I’ve never necessarily agreed with everything he’s done, never seen eye to eye with him, but I would love to be on his team for this,” said Robbie E. “Aces & Eights, first of all, they smell up the whole building — the Impact Zone isn’t that big and they stink the whole place up. I don’t know if any of them shower. Then also, they’re ruining Impact Wrestling and they’re trying to take our jobs, so I would definitely be on Sting’s side and want to help him out with this huge Lockdown steel cage match.”

He will admit to one fear about the whole Aces & Eights angle, though. “I don’t know who’s behind it, but I pray to God that it’s not Cookie.”

Greg Oliver’s hair — what’s left of it anyway — takes about two minutes in the morning to get ready. Greg can be emailed at [email protected].