In Pat Laprade and Bertrand Hébert’s Mad Dogs, Midgets, and Screw Jobs, the duo points all signs to Montreal as the hotbed of Canadian professional wrestling. In the text, the men cover the history of wrestling in Montreal, going back as far as the 19th century to modern times and all the nooks and crannies in between. Covering all of the figures and events, the two leave no stone unturned, covering match results, broadcast histories, and various details about the athletes and promoters alike. 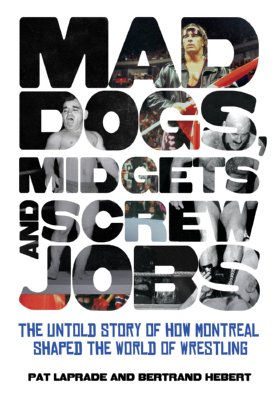 The book begins with the 19th century roots of professional wrestling in Montreal, where wrestling was still very much a sport that pitted one competitor and their style against the other. From then on, the evolution from sport to entertainment is seen in the scope of the city, with the beginning of the 20th century marking the first “golden age” in the city’s promotion of professional wrestling. The two “golden ages” that reached from the 1930’s to the 1970’s lead to the decline of Lutte Internationale (International Wrestling) and the modern boom of the WWF/WWE.

Throughout the coverage of the time periods that defined Montreal wrestling, familiar names like Frank Gotch, Ed “Strangler” Lewis, Lou Thesz, Buddy Rogers, the Rougeaus, and the Harts pop-up, where more background is given to their influence in the city’s wrestling scene.

However, names like George Kennedy, Yvon Robert, Frank Valois, and The Great Antonio may not be too familiar to some. This is where Laprade and company shine, giving incredible insight and detail in recognizing each man’s accomplishments, such as Kennedy’s promotion or Robert’s giant legacy.

The book covers every detail of pro wrestling in Montreal, painting vivid backgrounds of figures that readers may have never even heard of previously. The structure of the story intertwines the history in the details of the notable figures involved, connecting each piece smoothly to put together a timeline of Montreal’s professional wrestling back story. While some may find the semi-encyclopedic style tedious to read, Laprade does well in blending the two elements to weld the story together. 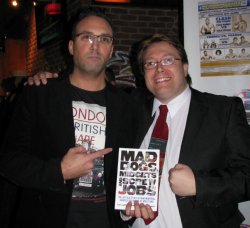 Pat Laprade and Bertrand Hébert at their book launch. Photo by Greg Oliver.

In addition, there are even more bases touched than the big picture of Montreal wrestling, as Laprade goes on to cover some of the niches in the city’s world of wrestling. The independent promotions and stars of the city have some light shed on them, along with the history of women’s professional wrestling in the city. Of course, the controversial form known as midget wrestling is highlighted, with Montreal being the birthplace of the style. Furthermore, broadcast histories, venues, and families of the Montreal wrestling world are given the treatment as well.

Overall, Mad Dogs, Midgets, and Screw Jobs: The Untold Story of How Montreal Shaped the World of Professional Wrestling is an informative and entertaining read for any professional wrestling buff. Laprade and Hébert’s well-researched text shows the evolution of the world of wrestling in the city of Montreal, which has been the focal point of Canadian pro wrestling history. The information and style of the book, just released by ECW Press, not only makes it hard to put down, but also an essential reference for any reader looking to understand the history of local wrestling in Montreal.