Ted Herbert was a great human being, mentor, and friend. His passing in November left a hole in my life. In 2002, I was a meek, bony young man who picked up a newspaper article that was passed along to me, which focused on Ringmasters Pro Wrestling School. With some hesitation I picked up the phone and asked about the gym that Ted and his son Santino operated on the outskirts of Brampton, Ontario. 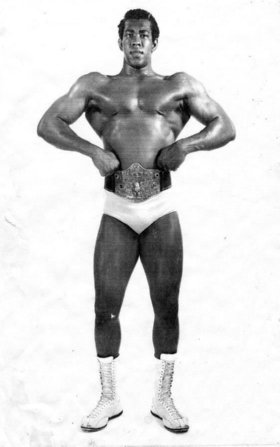 Ted Herbert was Kuroshio Taro when he wrestled in the IWE promotion in Japan.

Soon after speaking to Santino, I walked into the pro wrestling gym and was captivated by a number of things: the numerous photographs that contained Ted wrestling the likes of Mad Dog Vachon, Tokyo Joe, and The Original Sheik, Ted’s cauliflower ears, his expansive height, his obvious strength, and the wrestling ring.

Every now and then I would hear Ted say that “Sabu’s blood is in that ring,” and that the ring originally belonged to WCW. After this initial visit to Ringmasters, I was determined to return — and I did, often spending my high school days after class in Ted’s gym.

Practices at Ringmasters were two hours in length, and ran two or three times a week. He also motivated his students to frequent the gym to get in better shape, which was another obvious passion of Ted’s.

We learned of Ted’s wrestling career in pieces.

Ted began his wrestling training in his native Trinidad under Ray “Golden” Apollo. Like many of the wrestlers of his generation, Ted was chosen by his trainer due to his natural height and strong presence.

He was the 1972 IWE Rookie of the Year in Japan, working as Kuroshio Taro, and later held the IWE Championship. Wrestling would then take him around the world during the 1970s, and ‘80s. 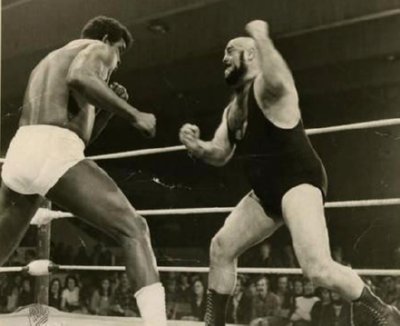 He was also an accomplished body-builder, winning body-building titles in Quebec, Canada. His knowledge of both of these sports was practical, as he learned both from experience, and — as he put it — “from the best.” Ted’s peers were wrestlers such as Karl Gotch, Billy Robinson, Eddie Morrow, Tokyo Joe, Larry “The Axe” Hennig, and Andre the Giant, who was a tag partner of his.

One story that Ted passed along was centered on Karl Gotch who he described throwing Andre Roussimoff over his shoulders with a German suplex directly into a bridge. This occurred in Japan. He also told us more humorous stories which involved Dusty Rhodes and Bobby Heenan. Both of these men were quite creative, not only as in-ring wrestlers, but also as charismatic personalities backstage, and on-set. 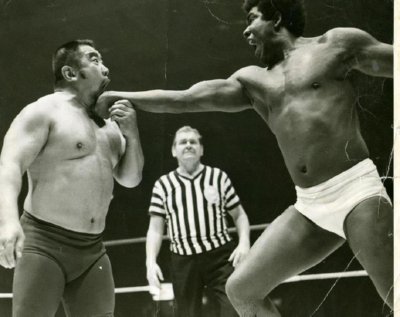 A punch to the jaw brings surprise.

Ted thus learned various catch-as-catch-can, or shoot-holds and maneuvers from his peers, and had the importance of conditioning for professional wrestling ingrained within him. He would almost always have us complete three sets of squats which were of one hundred repetitions each, and focused on the importance of neck-bridges in order to strengthen the muscles around the neck area. Ted’s training focused on the fundamentals, while also showing us a number of moves that he learned while traveling internationally. Learning to wrestle at Ted’s gym was a privilege that made my years as a teenager rather extraordinary and worthwhile.

It was thus quite painful when I found out that Ted had died on Monday, November 19, 2012, at Trillium Health Centre in Mississauga, Ontario. He passed away during heart surgery. He was 65 at the time. I had spoken to him over the past few years, although I hadn’t seen him for about seven years. I was planning on meeting up with him, but I had often been away from where my parents reside. 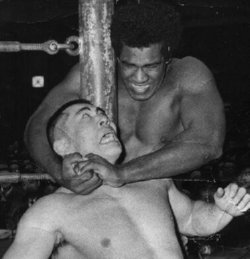 One of my greatest memories involving Ted occurred when I spoke to one of Tokyo Joe’s students, TJ Wilson (now WWE’s Tyson Kidd), who was able to help Ted and Joe reconnect. They hadn’t spoken for about 20 years. It was a crowning achievement in my mind. Tokyo Joe had his students — Dave Swift, Apocalypse, and TJ — prepare an extensive training and conditioning video which was very physically exhaustive. This motivated Ted to push the class harder. I think that is what made men like Ted Herbert, Tokyo Joe, Billy Robinson, and Karl Gotch who they were. They helped, pushed, and motivated each other to build and grow. That mix of competition and camaraderie was something that Ted brought to the ring. He also made sure that we wrestled and trained safely, while encouraging us to focus on school as well.

Ted is survived through his family — his children Santino (and wife Raylene), Tamara (and husband Steve), Joey, Thalia and Nandie, and grandchildren, as well as his ex-wives, B.B, Barbara and Monica, and his family still in Trinidad & Tobago.

As for me, I am just one of the many thankful people who came in contact with Ted Herbert during his lifetime.