DETROIT — TNA Wrestling came to Detroit with their “Road to Lockdown” show at the Fillmore Theater. The Fillmore is a very old building. I asked Dad how old it was, and he said it was older than Grandma.

The first match was Robbie E, followed by Big Robbie T vs Joseph Park. First of all, Robbie E challenged Joseph to a Bro Off dance contest. People booed Robbie E’s dancing, but I got to admit he was good. Park was about to dance, but Robbie E attacked him. Joseph wound up winning the match. It was good, but not too interesting other than the dancing. 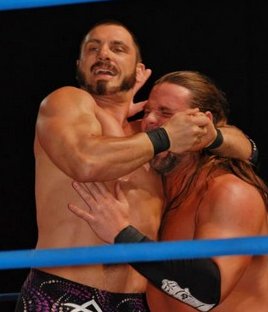 Next, Earl Hebner came out and mocked Bret Hart by putting on sunglasses and spitting his gum out of the ring. I didn’t get it Anyway, Gail Kim and Tara faced ODB and the new Knockouts champ, Velvet Sky. The match was weird because ODB kept on hitting her own boobies. But other than that, it was good. Velvet and ODB won. All the girls seemed to be wearing their underwear, and Dad had a weird look on his face most of the time.

The next match was DeVon vs Brutus Magnus for the TV title that DeVon was wearing. The two were fighting all over the arena, but referee Brian Hebner never counted a pinfall. The ending was when another member of Aces and Eights came in as a distraction, but it did not work. Even so, DeVon hit Magnus with a low blow to win via pinfall. I was thinking how come it was that the referee (Hebner) was not counting, and then I figured it out: “Like Father, like son.”

Then, Austin Aries vs Cowboy James Storm. Aries almost got counted out because he went back to the locker room Storm won by a pinfall, and it was a great match. After it was over, The Cowboy celebrated by spraying a lot of people with beer, but nobody seemed to mind. I was glad that I didn’t get any beer on me, because Mom would have got really upset.

The semi main event was next, and it was Kurt Angle vs Mr Anderson. The end was that DeVon came out as the distraction, but Magnus came out too, and gave DeVon a low blow and then punched out Mr. Anderson. Angle was then able to win the match with his Angle Slam.

After that came a really long intermission so that the ring guys could put up the steel cage.

At last, TNA World Champion Jeff Hardy faced Bobby Roode. They fought a very good match, to the top of the cage and in all four corners, Hardy won with a twist of fate so he retained his world title. It was a great match.

And a great show. I really enjoyed it.