On McMahon’s Secret Service – A tribute to 007 Malenko

The Oscars will be celebrating 50 Years of James Bond tonight, and there is no question the influence Ian Fleming’s fictional spy has had on popular culture all over the world. While pro wrestling has had its share of James Bond style villains — such as such as Live and Let Die’s voodoo-influenced Papa Shango — and even former Olympic weightlifter turned pro wrestler Harold Sakata (Tosh Togo) starring as the evil Oddjob in Goldfinger, there has been only one thorough James Bond-like character in a mainstream wrestling show: the WWF-Attitude era’s brilliant repackaging of the “Man of a 1000 Holds” Dean Malenko. On James Bond’s special night at the Oscars, SLAM! Wrestling thought it would raise its martini (shaken, not stirred) to this short-lived but memorable tribute to James Bond. 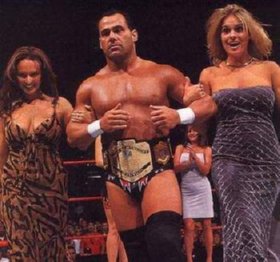 Dean Malenko as “Double Ho Seven” and his escorts for the evening.

Malenko came in as part of the Radicalz from WCW to WWF in January 2000, which included Eddy Guerrero, Chris Benoit, Perry Saturn, and Malenko. While Guerrero and Benoit both became the Radicalz biggest breakout stars in the WWF (though both are no longer with us), the more soft-spoken Malenko was left as a supporting character, at best. However, in the pre-Stephanie McMahon-Levesque run Creative structure, midcarders were not to be banished, but repackaged and pushed faster than an Aston Martin.

Whether intentional or not, the WWF’s Double Ho Seven was a Swiftian Satire, and much more powerful than the simple parody of the Austin Powers film series. Unlike Austin Powers, Malenko played his character without any whimsy, which made it seem all the better. 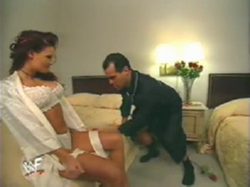 Lita is the object of Malenko’s attentions.

Malenko would come out with nameless ladies, allegedly supplied to him by the Godfather, but it wasn’t long until a female wrestler caught his eye: Lita. While the film 007 would have won a girl’s heart in an instant, Lita told Double Ho Seven his services were not needed. Once again, one wonders if the aura of the film 007 would be shattered if he is rejected by every woman he encounters on the screen. Isn’t being a deadly spy On Her Majesty’s Secret Service enough to be cool?

Lita told Double Ho Seven that the only way she would ever go out on a date with him would be if he could beat her in a wrestling match. In the film world, Bond has rarely battled female villains in hand-to-hand combat, or has usually come up on the short end of the stick (think Roger Moore against a ferocious Grace Jones in A View to A Kill) but the WWF’s Double Ho Seven character took on all comers, Andy Kaufman style. Unlike Roger Moore, Malenko won that match against the girl he had eyes for with The Texas Cloverleaf, a move so destructive that not even Q could have invented it. In the end, like 007, Double Ho Seven got his girl.

The end of Malenko’s Double Ho Seven character was once again a work of writing genius: two other female wrestlers who were disgusted by the ways of his sexist womanizing decided to take him on in a handicap match. While Double Ho Seven thought facing two women in the ring would be fun, some outside interference by Crash Holly cost him his match against them. Emasculated, Malenko’s character never recovered from that defeat: his character’s end at the hand of two feminist wrestler characters was entirely appropriate. Pierce Brosnan’s run as James Bond fittingly ended a few years later (thankfully, in this writer’s opinion, who couldn’t stand Brosnan’s Bond).

007 is going to be treated like the film icon that he is at the Oscars, and rightly so. But as its host this year, Family Guy creator Seth McFarlane knows, satire, not imitation, is the sincerest form of flattery, and no list of James Bond satires should be complete without the one so wonderfully played by Dean Malenko.