Zbyszko looks back at 1980 and Sammartino feud in new DVD

Larry Zbyszko has done it all: world champion in both single and tag team division, commentator, author (Adventures in Larryland), recording artist (“Boo on Me”), pilot, aspiring pro golfer, protégé of Bruno Sammartino and heir to his Living Legend Title.

In his new role with Kayfabe Commentaries, he acts as a historian recounting the history of the WWWF in 1980.

His eye witness account of that year, now 33 years ago. is because of the epic Sammartino versus Zbyszko cage match, known as Showdown at Shea. 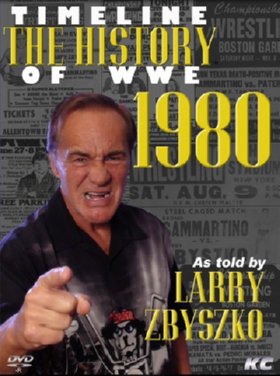 The new DVD, Timeline 1980 as told by Larry Zbyszko to Kayfabe Commentaries is 107 minutes of Zbyszko reliving memories.

Here’s how Kayfabe Commentaries is billing it: “Larry Zbyszko sits before the KC cameras for this riveting edition of Timeline: The History of WWE. Head back to 1980 and watch Larry build the feud with Bruno and learn the important game of big-time wrestling politics as Bruno taught Larry how to go head-to-head with Vince Sr. This edition is a must-have for the wrestling historian.”

At the start of 1980, the then-WWWF was on the verge of financial peril. WWWF champion Bob Backlund had yet become the draw of Sammartino’s status, wrestling contracts were non-existent, wrestlers figured out the gate by counting heads. Zbyszko gives his behind the scene views of Hulk Hogan as Andre’s jabroni, Gorilla Monsoon, Andre and Haystacks Calhoun as attractions, and the Fabulous Moolah and her ladies wrestling troupe as novelties. Pop-outs throughout the DVD offer interesting points such as Backlund wrestling the Destroyer (Dick Beyer) in Toronto January 1980, are noted.

The DVD explains Zbyszko’s initial attempt of luring Bruno out of retirement, the chair shot heard around the world and the violent fan reaction that followed throughout the circuit, both before and after the actual match.

Zbyszko revisits wrestling Sammartino at Madison Square Garden and his close encounter with a Mafia Don.

As the year (and DVD) progresses, more stories about his dealings with Vince McMahon Sr. are shared.

Zbyszko gives credit to Sammartino as the primary architect of the angle and as the consummate business guru in dealing with the McMahons. Funny antidotes in dealing with Vince Jr., Angelo Savoldi, Monsoon, and Phil Zacko in regards to payouts are also noted.

For those interested in the history of wrestling prior to the creation of the WWE, this DVD (or online stream) was both insightful and entertaining. Those who enjoy a trip down memory lane will enjoy this DVD.

The fact is that time goes on, event participants pass away, and memories fade. The real accurate history may never be known. At least, however, there is a recording of one insiders recollection, embellishments and all.