It has gotten to the point where Tom Jones, a staple of the wrestling scene in Texas and the Mid-South territory for over 30 years, tells the same stories again and again. Now confined to a nursing home in Texas, suffering from dementia, the veteran grappler is a shell of his former self.

And his family is asking for help to take care of him. 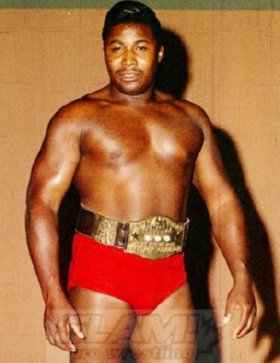 Cody Jones and his sister recently moved their father from a facility in Tulsa, Oklahoma, to be nearer to them in Amarillo, Texas.

Back in 2009, Tom Jones was a lot more conversant, though, and shared some of the memories from his wrestling career and the people he worked with.

His early days in pro wrestling came in Indianapolis for Dick the Bruiser’s promotion. From then on, there aren’t many places he didn’t work, and held many title belts along the way.

Yet he was most proud of being a pioneer.

“I was the first black to wrestle in the state of Oklahoma, Arkansas, and down through Mississippi,” he bragged. “I was there before JYD and Ernie Ladd.” (Records show there were occasional African-Americans wrestling back in the 1930s, before the heavy segregation of the 1950s and 1960s, though never against white opponents.)

“We broke the colour line in Louisiana with Tom Jones. In other words, Tom Jones was the first black that we got to book against a white wrestler,” said promoter Bill Watts. “The shit we went through to get that done was unbelievable.”

“Mr. Ebony” Jones is appreciative for everything he experienced.

“I had my fun. Wrestling, believe it or not, educates you as to what is going on in the world,” he said. “I never finished school. I grew up on a farm. My grandmother raised me. I really don’t have a lot of education, just enough to travel. I can get on TV and talk about anything.”

Jones was born George Thompson in Savannah, Georgia on October 22, 1939. (Not to be confused with Tom “The Emperor” Jones, who was a football player turned wrestler.)

“I thank God for an old country boy that grew up on a farm, I grew up in an area [that] the only thing you’d see moving around were the birds up in the air. But we had food to eat and all that stuff. I drove a tractor from sun up to sun down, changed horses, cows and all that stuff. That was my life.”

He went to Indianapolis to get a job in a factory doing manual labour. He was a regular at the wrestling matches in town, and eventually learned about Tony Santos’ wrestling school in Boston. He debuted against Dick the Bruiser, a man he had booed only years before.

From his rural beginnings, Jones wrestled across North America, from California, where he was the TV-based Beat the Champ champion and held tag titles with Mando Guerrero and S.D. Jones, to Georgia, where he held the tag team belts with PorkChop Cash, and to the Pacific Northwest, where he was tag champ with Mike Miller.

In between was a whole lot of wrestling in Texas and the Tri-State territory made up of Oklahoma, Louisiana and Mississippi. 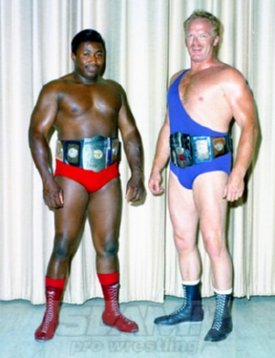 One of his most notable pairings was with the late Billy Red Lyons.

“Best partner I ever had,” Jones said of Lyons. “He taught me the psychology of the business, the wrestling, the moves, whatever, the bad people you couldn’t trust, who you could and couldn’t trust … We held the tag team titles longer than anybody here for Bill Watts. We had them for two years.”

Was there hassle for teaming with a white man? “Up around Arkansas, a couple of the towns there, they got a couple of calls, they didn’t want me in town.”

It was obvious from the conversation that Jones missed the camaraderie as much as anything. “We rode so much up and down, it was almost 24 hours a day. You’d entertain one another, telling jokes and all that stuff.”

Unlike his own father, who Tom said he only saw twice in his life, he has tried to be a good parent, even while he is on the road. He and his wife are since divorced. During the interview in 2009, he bragged about both his son and daughter, Kerri Thompson, who is a straight-A student at West Texas State.

Cody Jones looks back on the memories of his dad in pro wrestling fondly.

“I would hear stories, that my mom would tell me or he would tell me, it seemed pretty cool,” he said of growing up in a wrestling family. Alongside barbecues with the Von Erichs, “The Missing Link was my favourite wrestler when I was a little kid. I’d pull on his tuft when I was really young.” 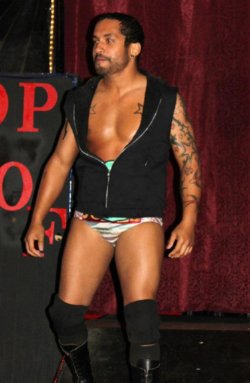 Cody Jones has followed in his father’s footsteps into the ring.

Obsessed with wrestling, Cody was trained by his father to wrestle.

“I treated him just like I did the rest of them,” said Tom Jones. “He was a natural. When he was four or five years old, he had a Hulk Hogan doll. He knocked off more ceiling fans jumping off the walls, he broke his leg, he just went on and on.”

In part to help promote his son, Tom Jones ran shows for years in Oklahoma.

His old friend Danny Hodge served as the commissioner for the Oklahoma Professional Boxing Commission. “He’s a good man. He’s still got that power in his hands,” said Jones in 2009. “You know who the one was watching over my shoulder? Danny Hodge. He brought me into Japan, and he watched over me.”

But now that is all decidedly in the past for Tom Jones.

His health issues have piled up, from glaucoma in one eye to high blood pressure. Now dementia has a hold on him. “He was always the type, ‘No, no, I won’t go to the doctor,'” said his son. Money-wise, Jones said that he lost a bunch on a bad investment. 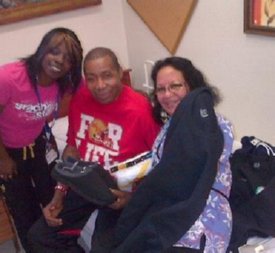 Ex-wrestler Steve Cox helped his old friend a ton in Tulsa. He said Jones was always amiable, even while confined to the nursing home. “The help loves him!” laughed Cox. “They all come to his room when I’m there and they let him do things the other guests are not allow to do!.”

When the call went out for money to help Tom, Karen Merritt, a retired wrestler, stepped up immediately, sending in $75. “I don’t know how he came to be in the situation where he didn’t have anything. But as soon as I heard I wanted to do all I could,” she said. “Tom is a really good man and was a good friend to me when he lived in Texas.”

Still, in 2009, Tom Jones had no problem being wistful. “If I could turn back time, I’d do it all over again.”