Robbie E had an Amazing Race

While Friday nights will eventually be the home for TNA Impact Wrestling on Destination America, for tonight, it’s the finale of The Amazing Race on CBS. One of the last four teams standing are TNA stars Robbie E and Brooke.

“We’re on CBS on one of the most famous reality shows of all time,” gushed Robbie E down the line. “I know last season they were getting 10 million viewers a week. This season, they are doing somewhat close to that. It’s a different world. Reality show fans, I thought wrestling fans were crazy; reality show fans are crazy. Airports and everything, getting recognized, and people saying, ‘Good luck’ and ‘We love The Wrestlers.’ I’ve had a few families and little girls shriek over me in the supermarket and stuff. It’s been fun.” 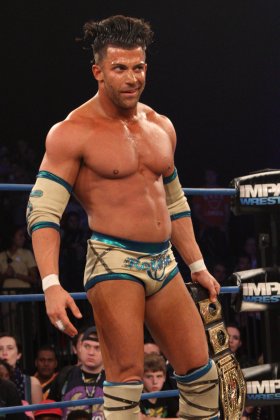 The real life couple of Brooke Adams and Robbie E. Strauss will see the conclusion tonight at 8 p.m. ET of the already-completed race, the 25th “season” for the show. Sworn to secrecy, Robbie E will only hype and hype some more.

“We’re in the final four, me and Brooke, #TheWrestlers, #teambro. Who would have thought that we would have made it this far? There was a lot of competition. It’s pretty much THE hardest thing that I’ve ever done in my life, but now we’re one of the final four teams racing for a million dollars. I think the other teams and I think pretty much all the Amazing Race fans that have watched the show are surprised that we’ve gotten this far. I think they look at us as a team that could definitely win.”

For Robbie E, it was a break from wrestling, but not always.

“Throughout the race, it was pretty much racing 24/7,” he said. “When you’re in race mode, you’re just in race mode. There was a scene one time when we were in London running through a train station and there was a ‘Robbie E’ chant at one point, as we were waiting in line to get on a train. But beyond that, you’re in Africa, and these people don’t speak English, and they don’t even know what wrestling is in some of the places were were at!”

It has also meant an increase in visibility for them both. On Wednesday, Muscle & Fitness magazine ran an online story about Strauss to tie-in with The Amazing Race. He talks about his diet and his workouts. Robbie E, the character, is one to really brag and preen, but in this case calling the magazine story “huge” isn’t an exaggeration. “It was a big story, and I was pumped for it.”

He’s also pretty excited by a couple of upcoming events. This Sunday, he runs a seminar in Toronto, Ontario, tied in with the Squared Circle training facility. Then in mid-January, TNA kicks off again, on a new channel — Destination America.

“I’ll do seminars a lot of times before I do an independent show. It’s pretty much just the difference between independent wrestling and TV wrestling as far as little things that I’ve picked up for guys that want to make it to the next level — things to touch you up a little bit, character work, microphone work, stuff like that, working on your appearance,” he explained.

Aside from the extra payday, Robbie E says that he enjoys teaching. “I went to a lot of seminars when I started wrestling. I like working with younger guys. It’s fun to see guys and their different ideas of wrestling, help them out, and throw some things that maybe they didn’t think of before. I just enjoy it.”

While there is an element of scouting involved, Robbie E stressed that there was no promises attached to attending the $40-seminar.

“There’s so many wrestlers out there it’s really hard for someone to really stand out and say, ‘Oh my God, this guy’s definitely going to make it.’ Because there’s so much competition. You’ll see a guy every now and then with an awesome character, this insane look, or something. If they’re a nice guy and no attitude, I wouldn’t mind putting in an email or giving them some information about getting a tryout or something.” 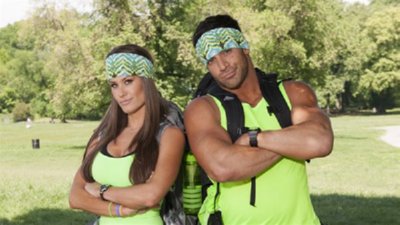 Brooke Adams and Robbie E. Strauss on The Amazing Race.

After years on Spike TV, TNA switches to Destination America. The debut is on Wednesday, January 7 from 9-11 p.m. ET, televised from New York City’s legendary Manhattan Center. Then, as of January 16th, it’ll move to Fridays, from 9-11 pm ET.

“We’re excited to be on Destination America. They’re super, super, super, super excited to have us,” said Robbie E. “There’s going to be more programming, as you’ve probably read online, so we’re going to have more than one show a week now — which is awesome. So more facetime. Everybody’s just excited to get back, to get busy working.”

Some pundits have called Friday nights a real dead zone for the supposed target audience that professional wrestling caters to; Strauss disagrees.

“I think it is what it is. Other wrestling shows are on Friday nights. People will check it out and see how it works for us and go from there. I’m sure, if it ends up not working, we would have the opportunity to switch days, I’m sure. I think our normal fanbase, carrying over from Spike TV, is going to follow us no matter what channel we’re on, no matter what night we’re on.”

He has also heard that complaints that Destination America doesn’t have anything close to the market penetration that Spike TV has.

“It’s a new channel. It’s only been around two years, but in the past two years, it’s grown a great deal. In two years from now, it’ll grow a lot more. What’s so great about TNA and Impact is we have hardcore, die-hard fans, and I don’t think we’re going to lose any of them. No matter where we are, I think they’re going to find us and they’re going to follow us. I think our following is going to stay the same, if not grow, because Destination America is all about Impact and promoting us, way more than Spike TV did. I think in the long run, it’s going to be better for us.”

Squared Circle LIVE! will present a show at the same venue, with a 5:30 p.m. bell time. Some of the matches include Ricochet vs Chris Sabin, The Amazing Red & Crimson vs Aeroform, Will White vs Ashley Sixx in a Dog Collar Match, and Anthony Gangone vs Jimmy Jacobs. As well, Angelina Love and SoCal Val will be in attendance.