Canadian Bulldog back with some e-scoops

If you have heard of the Canadian Bulldog, it may be because you’ve had a laugh at his satirical breaking news stories, or one of his letter campaigns to request the ridiculous of a sometimes agreeable wrestler. If you haven’t heard of him, he’ll be personally offended, and he’s trying to fix that with the release of his e-book Canadian Bulldog’s Biggest Scoops.

The Canadian Bulldog is the pen name of a Toronto businessman who has used his alter-ego over the years to torment and poke fun at the wrestling industry and its workers. His intent is not malicious, and he does what he does because of a deep affection for wrestling. After all, if wrestlers and pro wrestling as a business can’t take a ribbing then nobody can.

Seven years ago, The Canadian Bulldog released Thanks for the Compliment!!! Canadian Bulldog’s Nuttiest Letters Ever! EVER!!!, and SlamWrestling.net provided a review and interview with the self-described clueless fan (in character, that is).

Since that time, his character has evolved (or at least morphed) into a mock reporter, presenting his invented breaking news stories with all the earnestness of CBC news anchor Peter Mansbridge. His new book Canadian Bulldog’s Biggest Scoops is a downloadable resource of the articles he has posted over the years on World Wrestling Insanity. 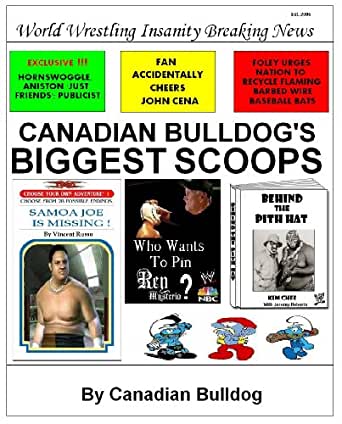 SlamWrestling.net and the Canadian Bulldog re-connected after all these years to get his thoughts on satire, why it’s fun to imagine what has happened to former stars that have receded away from the spotlight, and the need for eBooks in a world where we often visit links instead of libraries.

Again, pro wrestling is already heavily laden with its own sense of self-deprecation, so making light of the business is a bit like picking the lowest apples on the tree: it’s easy to do and often right there in front of you.

However, what makes Bulldog’s humour work is the old adage “he’s not laughing at pro wrestling, he’s laughing with it” (technically that’s not the adage word-for-word, but you get the idea). Bulldog is a wrestling fan, which means he isn’t taking cheap shots at the vulnerable and sensitive aspects of the business, but is instead amplifying the goofiness already inherent to the environment.

If anything, the “goofy” factor in Bulldog’s writing is increased since his letter-campaign, which necessitated at least some degree of tact and grounding in reality were he to hope for a response. With his “Breaking News”, the lid is off and Bulldog has only himself to keep his imagination from achieving ludicrous speed.

“I feel far more creative here,” Bulldog explains. “I think it shows in some of the writing. For example, I have a recurring joke where Vince McMahon is quoted in dozens of my articles — but I always put it in an unusual context. One day, Vinnie Mac and I are carpooling together, another day we’re out drinking. Doing things like that get my creative juices flowing.”

The Bulldog’s creative juices have led to hundreds of quick-hit articles presented in this collection. The articles are grouped into sections denoting the target of the satire: such as “That’s Wrestle-tainment” and “Marking Out,” for example, skewering the Hollywood/wrestling connection and wrestling fans, respectively. 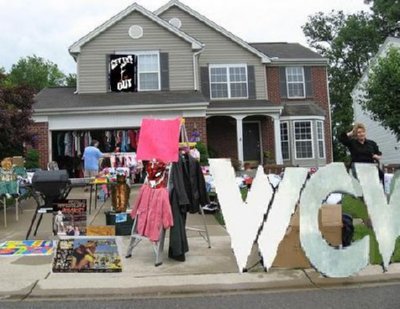 The greatest garage sale ever!

They’re all here. All of Bulldog’s “how did he score that?” scoops such as breaking the story that a New Jersey couple found Shawn Michaels’ smile, missing since 1997, in a suitcase in their attic; his gutsy investigations including a report on the U.S. Congress investigating the pervasive placement of weapons beneath wrestling rings; and his “stranger than fiction” takes on life as he discusses the purchase of WCW at a garage sale for $25 by a passer-by.

With such a thick volume (running at nearly 100,000 words), even these sections can’t keep the book from suffering a bit by way of overload. Bulldog himself recognized this issue while organizing his work, encountering certain doubts about the re-publishing of each and every past article before settling on full inclusion.

“To be completely honest with you, I first went through a process where I was going to vet some of the less desirable articles: some where the timeliness of it was crucial to the joke, or where the person I’m poking fun at has since died, or some that weren’t really as funny as I remembered them being when I put pen to paper,” he admits.

Ultimately, though, what is or isn’t funny is going to be completely subjective for each reader, and as it’s impossible to predict which articles may still amuse long after relevancy, or long after any offensive connotation may have dissipated, Bulldog plays it smart by presenting his entire catalogue — “warts and all”, as he suggests.

What you’re left with, therefore, is a comprehensive resource in which Bulldog has done the footwork for you by offering up articles that are available to be found on-line, but would require an exhaustive search process — as it was ,even for the author. “The only reason I went about the whole project is because I had several readers say, ‘You should make a book with all these Breaking News pieces,'” he recounts.

“There are others who have already made waves in the emerging genre of e-books — Lance Storm has compiled two collections of his weekly commentaries and Scott Keith has several e-books of his various reviews. I would never claim to be as well-known or well-written as either of those guys, but I still think there’s a market out there for it. Plus, it’s hard to find a lot of my earlier material from 2006, 2007 — and I say that as the guy who wrote it all!”

His articles run the gamut from subtle tweaks of reality to ridiculous distortions of the truth, but holding them all together is the palpable conviction that Bulldog is a reporter having cracked an important story. Just like the comedic straight-man from Bud Abbott to Leslie Nielsen, if you put on a serious face in the midst of absurdity, you’ve created half of the joke already.

Bulldog has gleaned this truth through his affection for satirical writing inside and outside the pro wrestling realm (Wrestlecrap, The Onion, and Cracked all make his required reading lists) and his appreciation for the need of hard-nosed journalism in pro wrestling.

In fact, in the middle of stories pushing the envelope of believability, Bulldog has found himself up against the unlikeliest of reactions: readers who have in fact believed some of his stories were legitimate breaking news. 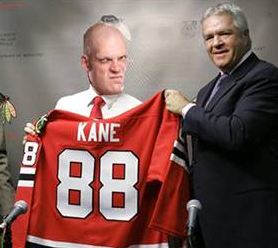 Remember when Kane was traded to the Chicago Blackhawks?

“One got me into a bit of a spat with Mickie James and her webmaster (History of the Divas Championship DVD Falls Flat)”, he recalls. “Another (Man Wakes Up From 10-Year Coma, Turns on ECW) got a major news program in touch with World Wrestling Insanity webmaster James Guttman to see if it was ‘real.’ And when I wrote that The Marine beat Quantum of Solace at the box office by some ridiculous amount of money, I had someone responding back with, ‘There’s no way that’s true’.”

He might have even had a hand in swaying WWE Creative when it came to Harry Smith’s character in his early development. “I guess the closest example of my work making things happen would be the editorial I wrote about WWE changing D.H. Smith’s name to Canadian Bulldog,” he details. “I wrote this scathing editorial threatening WWE (I had the name first!) and literally, the next week, they went back to calling him David Hart Smith or whatever. Bulldog gets results!”

Was it true? Did it happen? Does it matter? If it makes for a good story, then it belongs in Bulldog’s book. “That’s the sweet spot to me, when I can blur the lines between reality and fiction,” he admits. “Kind of like in wrestling.”

As an author, Bulldog is out to share a laugh, and there’s something innocently noble about undertaking such a task. He knows who his audience is, and this book is a favour to those who enjoy his work and have favoured him with their support over the years.

If he can bring in some new fans along the way, then they can join in on the ride as his character undoubtedly transforms into whatever the next version of his secret identity might be. From clueless fan, to passionate reporter, to … wherever the spirit moves him.